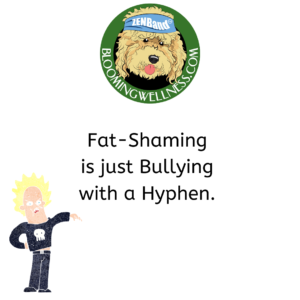 Have you ever been fat-shamed?

I remember the day vividly, because one always remembers the day he or she was fat-shamed. I was in junior high and in the teachers’ lounge getting my homeroom teacher’s coffee. Mr. Simon. That was his name, and Lord knows why he trusted a sixth grader to get his coffee. Sometimes one of my friends would join me on my coffee mission, and because we were kids, we’d squirt Ketchup or mayonnaise in his coffee. One time I think we put a penny in it. We thought it was hilarious, and oddly enough, Mr. Simon always complimented me on how great the coffee tasted. His perpetual compliments baffle me to this day. Mr. Simon died suddenly a few years ago, and I often regret not asking him if he realized we were tampering with his coffee.

One time when I went to fetch his coffee, two of my male classmates were in the teachers’ lounge. I went to a Catholic school, so I was dressed in a plaid jumper over a white blouse. They were dressed in dark blue slacks and light blue blouses. The boys started joking about my legs. They said my calves were fat and even made obnoxious animal noises. I remember pouring the coffee, my pale legs exposed under my jumper, and wishing I could throw a blanket around them. They laughed, and it hurt. That’s all it did. Looking back, I wish I had the strength to ignore their comments, but I didn’t. I was a kid and had a lot of learning to do. I struggled with an eating disorder, the idea of being perfect and did some stupid things to my body that I mistakenly thought would make me a better athlete. If you read my book, Manic Kingdom, you’ll know that I wrestled with bulimia, an absolute monster, for years. Anyhow…fast forward several years after that incident in the teachers’ lounge, and my muscular legs got me a full, soccer scholarship to college, and the kid who made fun of me died of a heroin overdose. Of course I wouldn’t wish that on anyone. He had a lot of potential and learning to do, just like me, and I wish he never took that damn drug. But it’s interesting to discover where folks end up in life, isn’t it?

Fat-shaming doesn’t work, yet people have been doing it forever. If fat-shaming worked, logic should tell you that we wouldn’t have any problems with obesity. But, we do. Obesity is currently a top public health threat, and it’s a complicated one that requires a thoughtful strategy. Some folks claim the “Body Positive” movement is contributing to the obesity epidemic. There is no evidence for that, just a few editorials here and there. The only solid evidence we have shows that fat-shaming doesn’t motivate people to lose weight, and in fact, does the opposite. After being fat-shamed, people become unhealthier. It’s safe to say that fat-shaming is just another form of bullying, and if you fat-shame, you are a bully.

This brings me to my latest Causes or Cures podcast. I was thrilled to interview Amanda Ravary, a clinical psychologist and researcher at McGill University in Canada. Amanda conducted an interesting study in which she analyzed several high-profile incidents of celebrity fat-shaming and studied the effects they had on a large sample of women. Celebrities face constant scrutiny over their looks and weight and when they are fat-shamed, it’s in a very public way: a viral social media post, a magazine article, a TV show, etc. And while we can imagine that this is a painful experience for the person being fat-shamed, does it impact the rest of us, and if so, how? Listen to my Causes or Cures podcast with Amanda Ravery here.

I hope you consider subscribing to Causes Or Cures, too. I record all of the episodes from my NYC apartment. There is very little editing, it’s raw, honest and very real. Most of the time, it sounds pretty good and I think I get my point across. ( You tell me.) I’m going to link to some other episodes below:

The Social Brain Hypothesis for Depression, with Dr. Doug Watt

Does Atheism go against the Scientific Method?

A chat with the wonderful holistic psychologist, Dr. Nicole LePera