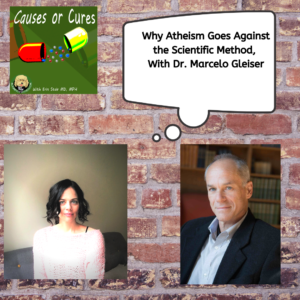 Does atheism go against the scientific method? What do you think?

I grew up Catholic in a small town where mostly everyone believed in God. I went to Catholic school and kept sheltered from alternative belief systems outside of Christianity. The first time I met an atheist was when I went to college, The US Military Academy. He happened to be my boyfriend, and my first boyfriend at that.  I found his lack of belief unnerving and depressing. It made me uncomfortable, and probably played a role in the demise of our relationship. All I knew were believers, and perhaps because I was already prone to depression, knowing that there were folks out there who didn’t have hope in a glorious afterlife was too dark and devastating to me.  Since then I’ve encountered folks with a wide spectrum of beliefs and my opinions have, thankfully, evolved. A big part of my personal evolution was learning to become comfortable with uncertainty. Becoming certain of uncertainty has not only helped me grow comfortable with there “maybe” being a God, but also helps me cope with my depressive tendencies.  Funny how that works.  😉

In this episode of Causes Or Cures, I had the pleasure of talking with Dr. Marcelo Gleiser about atheism, agnosticism, belief in God and the intersection of science and the spiritual dimension. Does atheism go against the scientific method? What about radical atheism? What about theism? What are the limitations of science, if any, when it comes to explaining how we got here? These, and other questions, are addressed during the interview.  ( The interview is only 30 minutes, however, so please don’t hold your breath for the meaning of life.)

Dr. Gleiser is a theoretical physicist, author of several popular science books and over a hundred papers in peer-reviewed journals, professor of physics and astronomy at Dartmouth College, and most recently, recipient of the prestigious Templeton Prize.
Does atheism go against the scientific method? Listen and decide.

Web Link to Causes Or Cures

Causes Or Cures on Itunes

Causes Or Cures on Google Play

Read my new parody on the sleazy side of the wellness business here: Yours in Wellness, Krystal Heeling!