COVID-19 is one heck of a virus. I thought we’d be out of it by now, but nope. Despite rolling out vaccines across the globe ( at least in rich countries), cases are still surging. Why are cases surging? Take your pick, but my feeling is that it’s one, two or a combination of the following:

Because of new, highly infectious variants that come with mutations in the spike protein, along with the fact that the vaccines target the original spike protein

Because even though data currently suggests that vaccinated folks are less likely to get infected, if they do get infected, they can carry viral loads that are similar to the unvaccinated, meaning they can spread it just as easily

Because some places with successful vaccination campaigns didn’t have enough naturally-acquired immunity in the population. Therefore, the population was highly susceptible. When folks started interacting normally again ( and given the above-mentioned reasons), cases increased.

Because the vaccine-induced immunity doesn’t last as long as we had hoped. That’s why many countries have turned to booster shots in less than a year into the vaccine roll-out.

Because some places were overly confident in the ability of the vaccines to stop transmission by themselves and relaxed other public health measures, like social-distancing and mask wearing.

It’s frustrating for everyone, because we all want to be done with this pandemic, yet the virus continues to suprise us, stump us and humble experts who think they have it all figured out. It’s a good lesson in humility and to be honest about and respect what we don’t know. Still, throughout all the uncertainty, I’ve tried to find consistent data points. That said, everything is subject to change, including consistent data points. A consistent data point could become inconsistent over time, but they can serve as bright orange markers when you’re lost in the woods: You might not know how dangerous or long the path is, but at least the orange markers can offer some guidance.

Am I seeing any consistent data points right now? Having looked at data from different locations, I am. Right now, I keep seeing that the vaccines continue to be protective against hospitalizations and highly protective against death. That association is strongest in the groups at highest risk, mainly older people. I hope this trend continues, but I do not know how long it will last. No one does, so we have to make educated guesses. I am seeing an increase in breakthrough cases and severity of breakthrough cases, as I’ll point out below for New Mexico, so perhaps that will lead to an increase in deaths in the vaccinated. Perhaps the booster dose will be the magic bullet that puts an end to COVID, but I don’t know. I also don’t know if the booster dose makes sense for people at lower risk for severe COVID. I also don’t know if the immune system will do something funky after all the vaccines and backfire on us. (I have Pfizer in my blood so I sure as shit hope not). And perhaps we have to expand our focus beyond the vaccine and focus more on early treatment options. After all, is it really a mystery why so many companies are releasing press release after press release for new and promising antivirals?

All of those question marks might give you anxiety ( totally understandable), so let’s bring it back to COVID vaccines and consistent data points.

Israel is one of the most highly-vaccinated nations, including a high booster rate. While cases seemed to have stopped surging, consistent data points are that the vaccinated are less likely to be hospitalized and less likely to die.  My other question is this: Will Israel’s “good” trend hold and does Israel show that boosters are needed to redefine what “fully vaccinated” means? 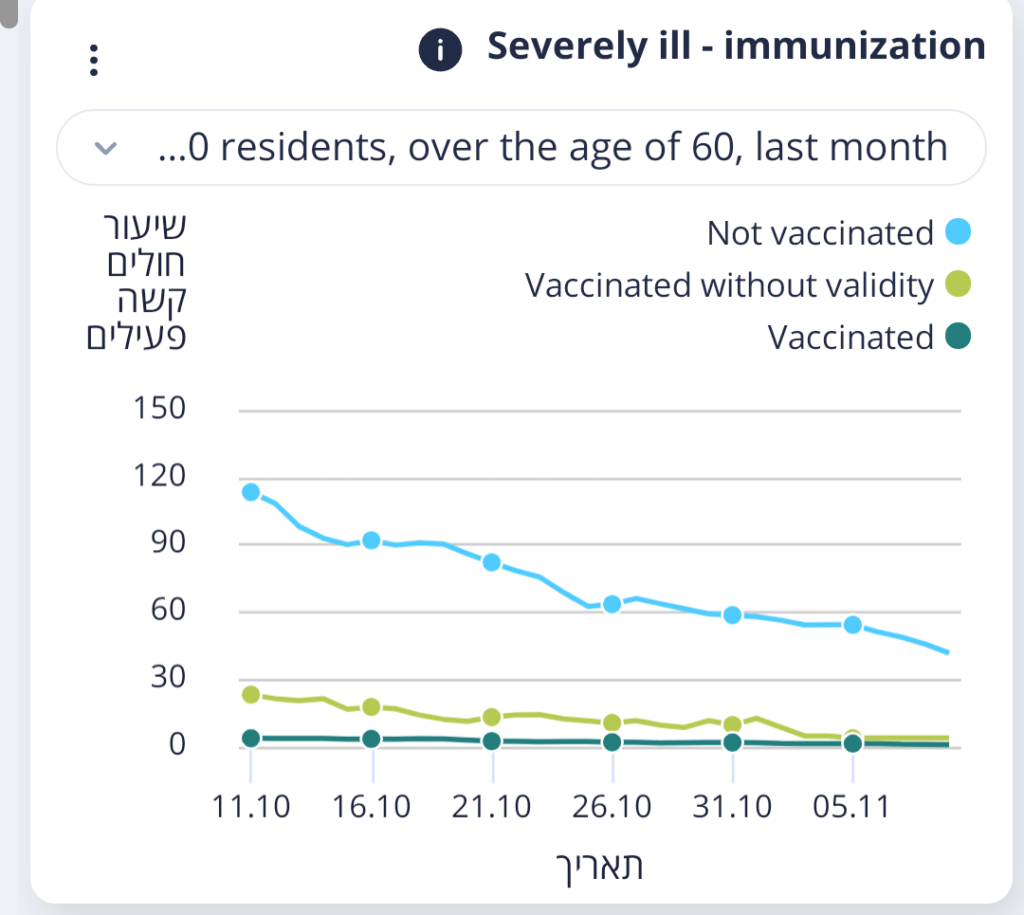 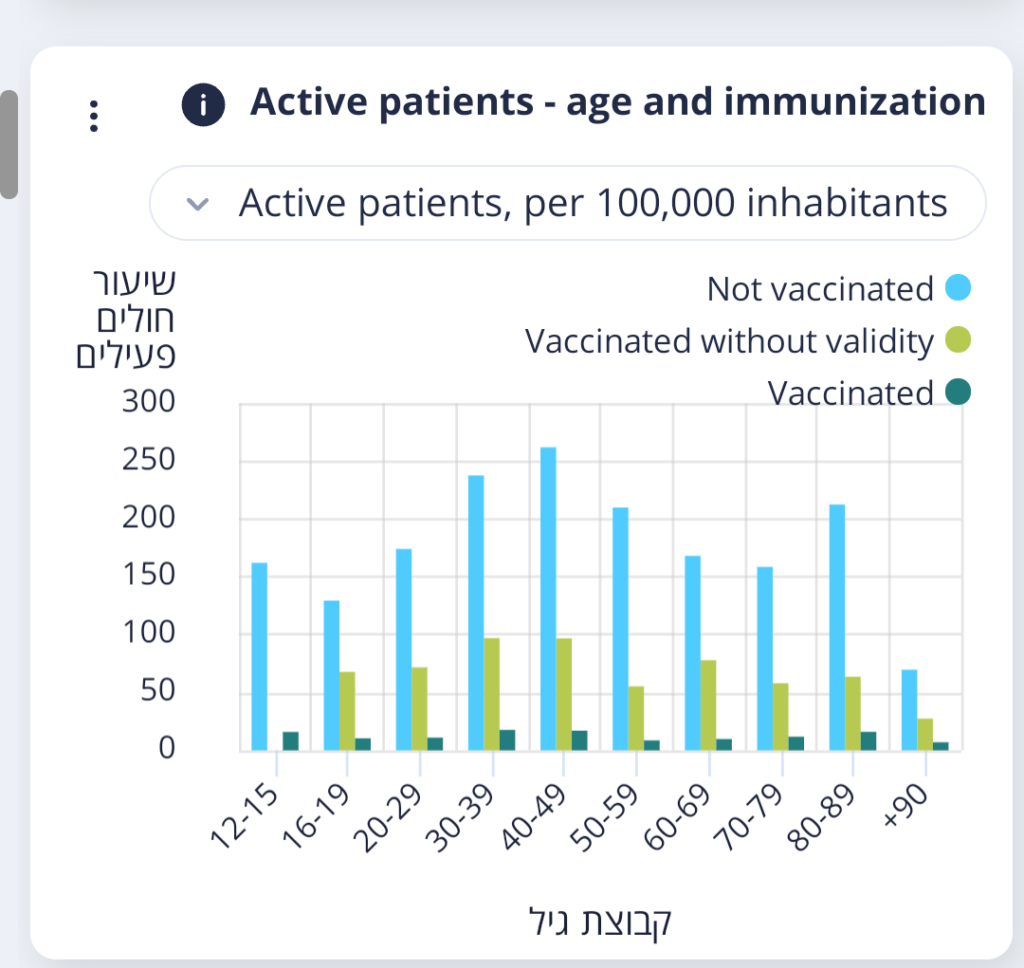 Singapore had an extremely successful vaccination campaign. While it seems backwards, Singapore had a super low case rate and practically zero deaths earlier in the pandemic, but then saw a surge in cases and an uptick in their death rate after the vaccines were rolled out. This, I’m sure, has to do with some combination of the factors I mentioned above. But as is the case with Israel, the vaccinated were far less likely to get hospitalized and die. Singapore’s goverment was paying the medical bills for all COVID-19 patients, but today they announced that they would start charging COVID-19 patients who remained unvaccinated by choice. ( I guess they see lots of bills in their future?) See charts reflecting May’21-Oct’21. 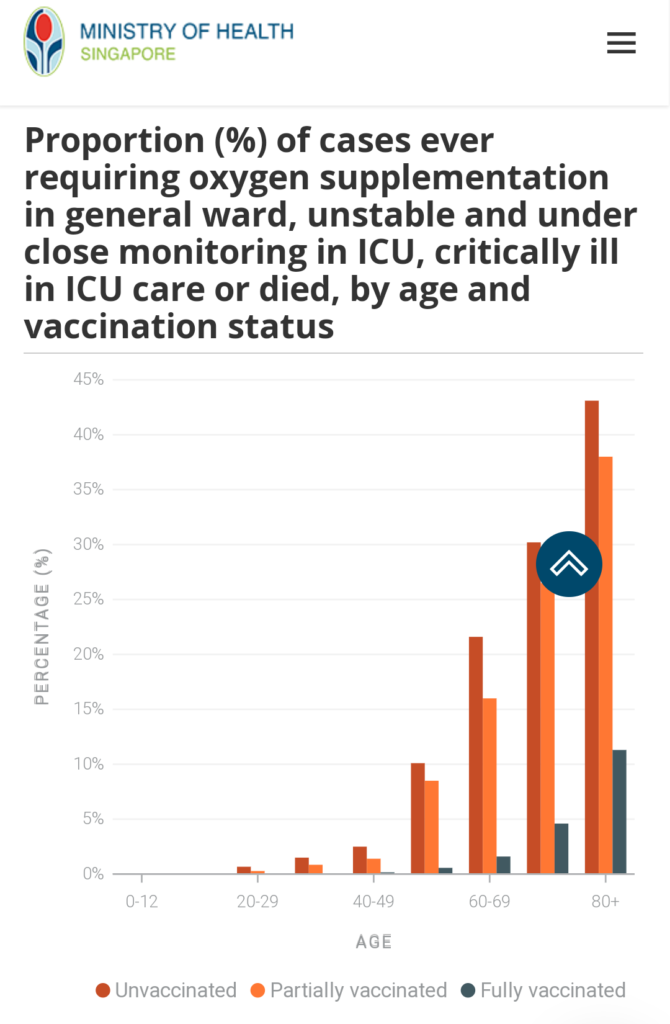 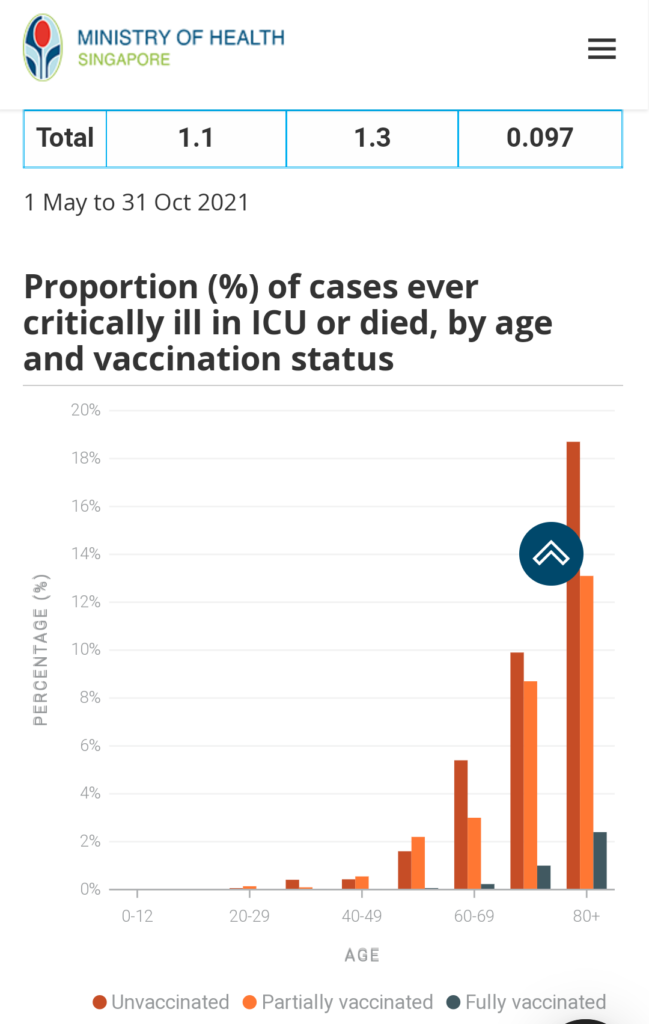 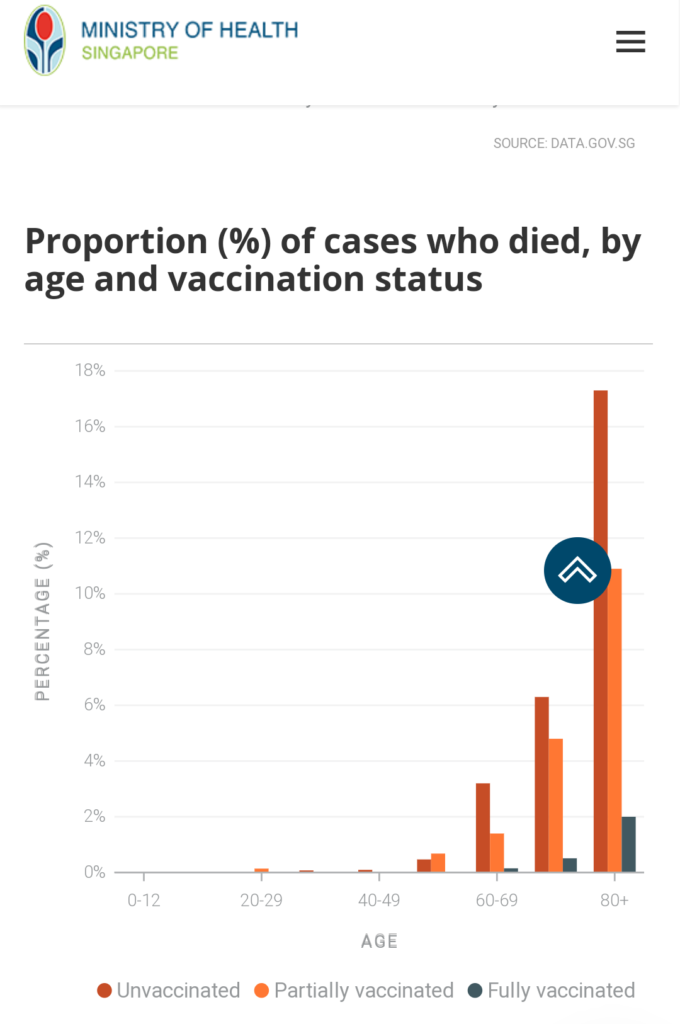 In general, we are seeing the same trend in the US. The CDC still has to update their data for October, but you can click here to see the hospitalization trends by vaccination status and click here to see the death rate by vaccination status. Now, some of you may not trust the government (I get it), so that’s why I check for consistent data point across different countries. Even if you believe 1 government is lying, it’s harder to believe that a bunch of countries would lie about the effect of vaccines on hospitalizations and deaths rates, right?

I wanted to take a closer look at New Mexico, because it’s an interesting story. As of today, New Mexico is 5th in the country for cases/capita, even though approximately 75% of its adult population is vaccinated. New Mexico is also one of six states to continue an indoor mask mandate. Yet despite two public health interventions, its cases are surging, and more serious cases are popping up in people below 65. In the charts below, you’ll notice that the vaccines continue to be protective against hospitalizations and deaths, but the breakthrough hospitalization rate is significantly higher in the last 4 weeks ( the 2nd chart) compared to the average breakthrough hospitalization rate between Feb’21-Nov’21. ( A breakthrough infection is a COVID-19 diagnosis in someone who is vaccinated.) Does that mean we are going to see an increase in deaths ( a lagging statistic) in the next coming weeks? I hope not, but it is a concerning trend. 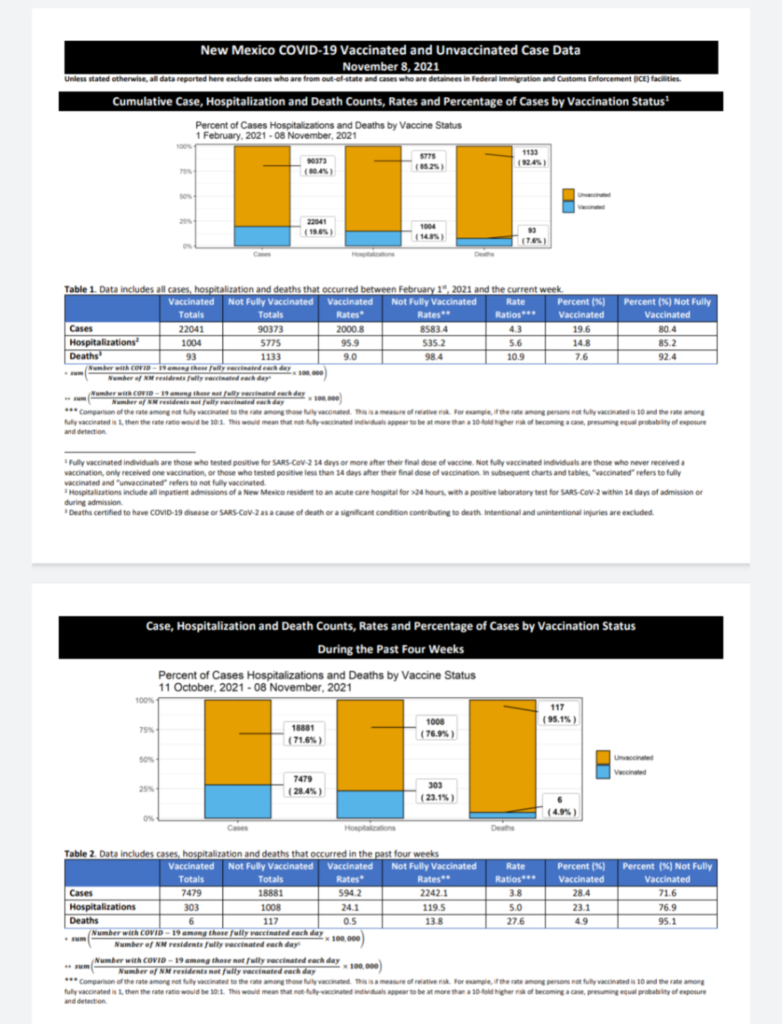 What does New Mexico need to do? Vaccinate more people? Boosters? Focus more on early treatment? All of the above? Stop socializing indoors during the winter? You tell me.

Cases are rising all across the UK despite high vaccination rates. As this recent article in Nature points out, it is going to take more than the vaccines to stop the spread, but they still remain protective against hospitalization and death. A new UK study showed that the Pfizer and AstraZeneca vaccines were 90% and 91% effective at preventing death. The article also points out that 75,000 people in the UK were hospitalized between July and October’21 compared to 185,000 between Oct’20-Jan’21 when there were no vaccines.

I am seeing the same trend in Ireland, even though their highest vaccinated county ( Waterford) leads the country in cases. You can read my take on Waterford here.

I tried to pick out some highly vaccinated places to show that, at least right now, vaccines are associated with a reduced risk of hospitalizations and deaths. I don’t know if this trend will continue, because, even though I only really highlighted New Mexico, we are seeing an increase in breakthrough hospitalizations in many places.

I have talked to a few dissenting doctors who believe the vaccines will fry our immune systems, and the vaccinated will end up getting severely ill in the long run. Are they right? I mean, I really, really hope not. If they’re right, I’m screwed along with millions of other people who got the vaccine.

There are other experts calling for us to redefine the definition of “fully vaccinated” to include 3 mRNA shots, not 2. They are using the current state of Israel as a guide. Will that “official” announcement cause more 2-dosed people to get another shot? Is that the magic move? Maybe. But we also have to consider how the need for boosters has influenced the thinking of the unvaccinated folks. “Well why should I get vaccinated when all the vaccinated people need boosters in less than a year” comes up a lot in focus groups.

What’s in the COVID vaccines? Here is a list of ingredients and what they do.

A cheap antidepressant for COVID? Maybe.

Proning and COVID-19: Why it Helps

One Response to “COVID Vaccines and Consistent Data Points”