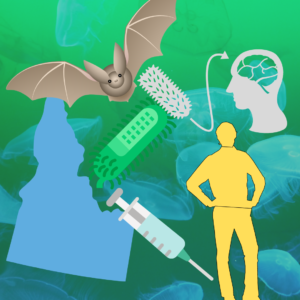 The Idaho Department of Health reported that a man in Boise County died of rabies, making him the first deadly case of rabies since 1978.

The deceased man came in contact with a bat on his property in late August. The bat was caught in his clothing, but the man said he did not recall being bitten or scratched. Sadly, the man fell ill and died of rabies in October. Once a person starts showing symptoms of rabies, he/she will almost always die. The Centers for Disease Control and Prevention were able to catch the bat and test it for rabies. It was positive. In the aftermath, anyone in contact with the man will hopefully be treated with the rabies post-exposure vaccination series.

How does Rabies spread?

Rabies (Lyssavirus) affects the central nervous system of animals. It is spread through saliva. In the final stages of the disease, the virus travels from the brain to the saliva, which is how an animal can spread it.

What is the Post-Exposure Series for Rabies?

First, if you find a bat on you, near you, in your bed, your clothes, you should try to capture it and immediately get it tested for rabies. Do this whether you think you were bitten or not. Sometimes people think they weren’t bitten, because bat bites can be shallow. If the bat tests negative, you won’t need post-exposure treatment. If it tests positive, you will. If you can’t catch the bat and its rabies status is unknown, you should still get the rabies post-exposure treatment.

The above paragraph can apply to any animal, really, but it’s probably more likely that you can catch a bat, versus a fox, skunk, raccoon or stray cat. It’s important to remember that rabies isn’t just about bats. Last year my dad, a veterinarian, and mom were taking care of a sick and abandoned kitten. My dad was feeding it through a dropper. The kitten was adorable and docile, but despite my parents’ efforts, it died. At first, my father wasn’t going to check it for rabies, but my mother had a gut feeling. They sent it off for testing, and a few days later, the health department called and said it tested postive for rabies. They both immediately started the post-exposure series.

It’s worth pointing out that not all rabid animals are angry, ferocious or try to attack you to bite you. Those symptoms would fall under “furious” rabies, but there’s also “dumb” rabies, where an animal appears calm and fearless of humans. Rabid animals can be wobbly, off-balance or appear almost drunk-like. My parents’ rabid kitten was calm and sweet till the very end.

Post-Exposure treatment for Rabies incudes immunoglobulin followed by 4 doses of the vaccine.

The kicker is the cost of the post-exposure series for rabies. Oh my world! I had no clue how much it cost until my parents showed me their hospital bill. Thousands of dollars!!! Luckily they were covered through their workers’ compensation plan.

Seeing their medical bill, I browsed around the internet and found really sad cases of people trying to manage extremely large bills for Rabies exposure. We’re talking bills between 10,000-25,000 dollars, amounts of money that a lot of people don’t have. In the last 10 years, the price for the post exposure shots has gone up 400%. The immunoglobulin shot is the most expensive.

The worst part about this is that an exposed person really has no choice. A person will die from rabies, like the Idaho man, so there’s no real risks vs benefits here. He or she needs to get the shots and will have to find some way to pay for them.

I also read that some people who have a potential exposure to rabies are slow to go and get the shots because of the cost. This sentiment is not unique, but rather commonplace in the US healthcare system. Lots of people experiencing symptoms of all kinds resist going to a clinic or hospital to be seen by a doctor, because they are afraid of the subsequent medical bills. Then what happens? Well, if it’s nothing serious, whatever is causing the symptoms will go away on its own. Such is the magic hand of Father Time. But if it’s something serious, all that waiting and resiting will only cause it to get worse. First Do No Harm, huh? You would think that starts with making healthcare more affordable.

So an Idaho man died of rabies. I really hope he wasn’t one of the people who waited because of the cost. Because that would just be tragic.

What’s in the COVID vaccines? Find out here.

Check out her health podcast here!

2 Responses to “Idaho Man Died of Rabies, 1st Deadly Case in State since ’78”