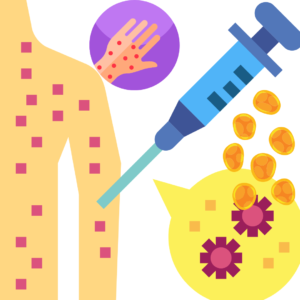 A Maryland resident who recently traveled to Nigeria tested positive for monkeypox. Health officials state that the person is only experiencing mild symtpoms and is isolated from other people. I assume they are conducing contact tracing to notify anyone else the person may have come in contact with, especially folks who sat near him/her on the plane ride(s) from Nigeria to Maryland.

It’s closely related to smallpox, a formidable virus that killed a lot of people. Both viruses belong to the genus Orthopoxvirus, though smallpox was eradicated in 1980, two and a half years after the last documented naturally occurring case of smallpox was diagnosed in a health worker in Merca, Somalia. The World Health Assembly voted in 1966 to eradicate smallpox from the globe. They did this through mass vaccination campaigns in western and wealthier coutries and something called “surveillance and containment” in poorer nations. Surveillance campaigns included house-to-house searches for cases that would then be isolated. They also used a form of vaccination called “ring vaccination” which means that a case’s close contacts or those who are susceptible and near the case (think of a “ring of people” around the case) are vaccinated.

How does Monkeypox show up?

The monkeypox case in Maryland is said to be mild, which is a good thing. Since monkeypox is similar to smallpox, it wasn’t recognized as a distinct virus until 1970, during the smallpox eradication efforts. Like smallpox, the incubation period for symtom onset is 7-17 days. Symptoms of monkeypox include a fever, headache and fatigue, along with a rash and swollen lymph nodes. It’s worth noting that swollen lymph nodes was not characteristic of smallpox and could possibly serve as a deciphering factor.  The rash is centrifugal in nature, meaning it is concentrated on the face and extremities, rather than the trunk. “Centri” means center and “fugal” comes from the Latin fugus, meaning “center fleeing.”  The rash starts out as macular (flat) to papular (solid and raised lesions) to vesicular ( fluid-filled) and pustular ( yellowish fluid, pus.) An infected person can have few lesions to thousands of lesions.

How does it spread?

Historically, most monkeypox cases were diagnosed in Africa, but it has the ability to infect a wide array of animals. Travel and things like the illegal wildlife trade and the movement of exotic animals has allowed for cases of monkeypox to show up elsewhere. The monkeypox case in Maryland had a recent travel history to Nigeria, most likely where he/she was exposed and brought it back to the US. Transmission occurs via saliva, respiratory droplets and direct contact with lesions.

Can you die of Monkeypox?

Yes. It’s not a benign disease. The case-fatality rate (# of deaths over # of diagnosed cases) is estimated to be 11%. Later in the illness, infected people can develop lung and breathing difficulties. Associated vomiting and diarrhea can lead to severe dehydration.  Monkeypox can infect the eye and lead to scarring or visision loss. Some people develop serious brain infections or sepsis, essentially a severe state of multi-organ failure.

What can you do once you get Monkeypox?

First thing first, isolate. There are antivirals being investigated for Monkeypox, but there currently is no standardized treatment. It’s mostly supportive care. The vaccines for Smallpox can be used to control an outbreak of Monkeypox and may help prevent disease once someone is exposed to Monkeypox. Available, FDA-approved vaccines inclue JYNNEOS (attenuated live vaccine that is replication deficient) and ACAM2000 (live, replication competent vaccine). Both vaccines contain vaccinia virus, a close cousin to Smallpox. However, the Smallpox vaccine is no longer available to the general public, because of the high risk of adverse events noted with vaccinia. It saved a lot of lives when we were actively fighting Smallpox ( a virus with a very high case fatality rate), but the consensus is that the risks of the vaccine outweigh the benefits when Smallpox is not an immediate threat. There is a third smallpox vaccine under investigation called Aventis Pasteur Smallpox vaccine. Like the ACAM2000, it is a live, replication-competent vaccine, but it couldn’t be used by the general public unless an emergency use order was in place. All 3 Smallpox vaccines are stored in the goverment’s Strategic National Stockpile.

One Response to “MonkeyPox Case in Maryland”