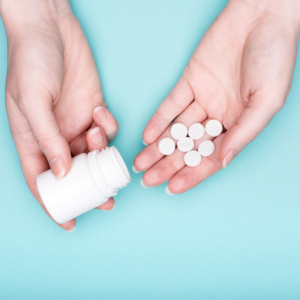 A common, cheap antidepressant for COVID?

As unlikely as that sounds, the evidence for it is growing.

A large, randomized controlled trial ( part of the TOGETHER Trial) was published in the Lancet that showed that individuals with COVID-19 who had at least 1 underlying high-risk condition and took fluvoxamine (Luvox) were significantly less likely to end up hospitalized or retained in an ER.

It is a generic selective serotonin reuptake inhibitor (SSRI) used for depression or OCD. It was first approved by the FDA in 1994 as a treatment for depression, during an era when the “chemical imbalance” and “low Serotonin” theories for depression were the most prevalent. If you’ve followed depression research since then, you’ll know it’s evolved beyond those theories. If you’ve followed my podcast or blog, you’ll know that I’ve mostly written about SSRIs in the context of withdrawal symptoms and how they last more than “two weeks” as well as effectiveness related to using SSRIs to treat depression in the long-term.

Who Was in the Trial?

Who Took What and for How Long?

All patients received usual care for COVID-19. 1 group of participants received fluvoxamine, 100 mg twice daily for 10 days, and another group received a placebo.

What Was the Primary Outcome?

The primary outcome of the study was hospitalization within 28 days of randomization or remaining in an ER setting under observation for more than 6 hours.

What was the Main Result?
Fluvoxamine significantly reduced one’s chance of being hospitalized or retained in an ER. ( Relative Risk= .68, BCI = .52-.88).
The relative risk reduction is 32%.
Out of those patients taking fluvoxamine, 79 had a primary outcome event compared to 119 in the placebo group.
How Does it Work for COVID if it was Used for Depression?
Lots of drugs approved for diseases can work for other diseases they aren’t approved for. Lots of drugs are prescribed for diseases they aren’t officially approved for. No one knows for sure why fluvoxamine helps fight COVID, but theories include that it has significant anti-inflammatory effects and anti-clotting activities.
What Does an Effective Antidepressant for COVID Mean from a Public-Health Perspective?
Well, fluvoxamine is a drug, so it would need to be prescribed by a physician. But from a public-health perspective, or a population-level perspective, the strong results from this study, along with prior evidence, suggests that we should consider ways to increase access to this drug, both in developed and underdeveloped countries. Access would need to be provided for the early-stages of COVID, as that is what the studies focused on. (Timing always matters, meaning if a sick person gets something too late, it probably won’t work as well if at all.) Perhaps there is a way to simultaneously leverage access to this drug a testing sites, while also increasing the number of testing sites.
We have been hyper-focused on vaccines for COVID-19 and that is certainly what is on the public’s mind, but we haven’t yet put the spotlight on early, cheap, effective treatments. Now is the time to do that. While the vaccines continue to reduce hospitalizations and deaths, there is an uptick in breakthrough infections (which puts  people at risk for long COVID symptoms too), people are being told they need boosters because of waning immunity and new variants, and if infected with the Delta variant, we know a fully-vaccinated person can transmit just as much as an unvaccinated person. Cases are also going up in some highly-vaccinated nations like Singapore, which I talked about on a recent podcast.  We have to expand our focus beyond the vaccine and think about early-treatment options that are EASY to get to people.
Plus, fluvoxamine is cheap. Based on US prices, it’s only 79$ for a package of 100 25mg pills. Unlike the vaccine, which is both expensive and comes with tedious logistical requirements, such as high-tech freezers, fluvoxamine doesn’t. You could scale-up a global fluvoxamine campaign super fast. We shouldn’t forget that while rich countries are talking 3rd and 4th boosters, many low-income and low-to-middle income countries don’t have enough vaccines to vaccinate even the highest-risk people in their population. I talked about that in a recent podcast here.
What are your thoughts?
PS: If you see the popup window, don’t forget to sign up for my newsletter!
Best,
Dr. Eeks
Instagram
Twitter
Facebook