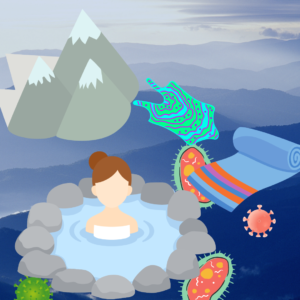 Image made by Canva

It’s highly unusual to hear about someone getting gonorrhea from a hot pool, but that appears to be what happened to an 11 year old girl in Italy. Most cases of gonorrhea are transmitted sexually.

An 11 year old girl was visiting the crater lake Speechio di Venere on Pantelleria Island, Italy with her family. After swimming in the lake, she soaked in one of the adjacent hot pools with family members near by. Two days later, the girl developed a burning feeling and discharge from her vagina. Her family purchased antifungal cream to help with the burning, and while it helped some, it did not completely resolve her symptoms. Two weeks later, the family returned to their home country of Austria, where the little girl was seen by a doctor. A vaginal culture returned positive for Neisseria gonorrhoeae, and a second culture confirmed the diagnosis of gonococcal vulvovaginitis. The rest of her family members tested negative.

Gonorrhea is mostly spread sexually, so when you see or hear about a young girl with gonorrhea, it’s imperative to rule out sexual abuse. I didn’t dive into the case that closely, but I’m sure the doctors ruled that out. There is evidence that gonorrhea can be transmitted via infected towels, sheets and contaminated bath water, though it’s far less common than sexual contact.

How could someone get gonorrhea from a hot pool?

The hot pool was body temperature, full of stagnant water and contained minerals and organic particles that may help sustain a gonococcus infiltration. We have all heard stories of people catching E coli and Pseudomonas ( the classic example) from hot tubs, so this case study just reaffirms the importance of requiring folks bath/shower with soap before and after exiting hot pools. Especially if they get crowded!

The little girl was treated with ceftriaxone and azithromycin and advised to take whey baths for two weeks to help restore the vaginal flora. She made a full recovery.

You can read the full case study here.

Hepatitis A at Starbucks in New Jersey

One Response to “Gonorrhea from a Hot Pool”