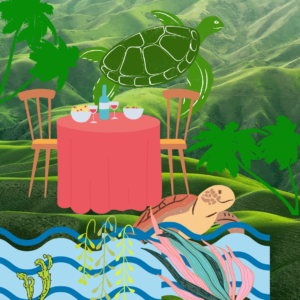 Seven people died after eating poisonous turtle meat on Tanzania’s Pemba Island, causing authorities to ban eating turtles in the area.  A three-year old child is one of the dead, and at the time of this report, others remain in the hospital.

Getting sick from eating poisonous turtle meat is called chelonitoxism. No one knows exactly what causes it, because turtles can contain a variety of toxins, such as heavy metals or pesticides that they ingest from their surroundings. Many speculate that people get sick because of biotoxins from blue-green algae from which the turtles feed.  Any turtle (or turtle eggs) can be affected. Right now, there is no way to identify turltes that are affected and there is no known antidote for chelonitoxism.

From the literature, symptoms depend on the specific toxin but can include sore throat, nausea, vomiting, ulcerations of the esophagus, seizures and other neurological issues, coma and death. Chelonitoxism seems to affect children and older people more than healthy adults.

In this particular outbreak, five families were affected after eating the poisonous turtle meat. Symptoms occurred the day after, on which three people died ( including the three year old), and then four more people died on the subsequent day. It is reported that 38 more people were admitted to the hospital but on their way to recovery.

While eating turtle meat is a delicacy for some cultures, and something one may try while traveling to various islands, etc., there is no way to pick out a turtle that will give you chelonitoxism. If you never eat turtle meat, however, you don’t have to worry about it.

Read Gonorrhea from a Hot Pool while on Vacation