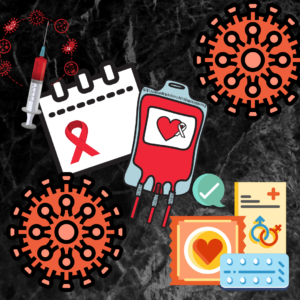 A highly transmissible HIV variant was recently discovered in the Netherlands. Scientists expect it arose in the late 1990s and has been infecting people for years. We are bombarded with news about different variants of COVID-19 and whether new variants will be more deadly or more infectious. This recent discovery gives us more insight into viral evolution and what variants “live on” and which burn out so to speak. Essentially, a virus needs to be infectious enough to continue hopping from one host to the next, and deadly to a degree that allows an infected host to still go out and infect other people. Like all of us with brains, these brainless little buggers do what they have to do to survive.

Using 2 large databases, researchers in the Netherlands identified a highly transmissible HIV variant that if left undiagnosed and untreated is much more dangerous than other HIV subtypes. They are calling it the VB variant for now. In 109 individuals with the highly transmissible HIV variant, there was a 3.5-5.5-fold increase in viral load compared to other subtypes. CD4 cells, key immune cells targeted by the virus, declined twice as fast in people with the VB variant vs people with other subtypes.

With the Highly Transmissible HIV variant (VB) how fast is progression to AIDS?

Scientists predict that in individuals in their thirties and without treatment, the VB variant turns into Acquired Immune Deficiency Syndrome (AIDS) (when CD4 cell counts drop below 350 cells/cubic millimeter) in just 9 months. This is compared to individuals with non-VB HIV who would reach that level of CD4 cell decline in 3 years. It is predicted that older age groups would reach that level of decline faster because they often have lower CD4 cell counts at time of diagnosis. The article was unclear about younger age groups.

Who was most at risk of getting the highly transmissible HIV variant?

What if people with the VB variant get treatment right away?

The good news is that treatment had similar effects in individuals with the VB variant and in individuals with the non-VB HIV variant. They had similar CD4 cell counts and mortality rates. The take-home point here is to get diagnosed early and get HIV treatment as fast as possible. People still take too long to get diagnosed, which not only impacts individual treatment but increases the chance of spread. In a study analyzing Dutch surveillance data, the mean time of HIV diagnosis for men who had sex with men was 6.1 years between 1984-1995. It decreased to 3 years by 2011. By the end of 2011, 11,500 men who had sex with men were living with HIV, and 1750 were undiagnosed. Of the 1750 undiagnosed cases, 29% were infected for less than 1 year and 16% were infected for more than 5 years.

What is the current prevalence of HIV?

Approximately 38 million people in the world have HIV. It has also led to 33 million deaths globally. It is believed that the original HIV strain first emerged in 1920 in the Democratic Republic of the Congo. There has been various mutations and subtypes since its emergence.

In general, HIV is still out there, and this recently identified highly transmissible variant of HIV will progress to AIDS faster and kill you faster if left alone and not treated. Luckly, progress in HIV medications can keep people alive and engaged in fulfilling lives, but it has to be diagnosed early enough. If people wait years before being diagnosed and engage in high-risk sexual activity, (sadly a historical trend), they can endanger themselves and others and continue to propagate all subtypes of HIV, including this more dangerous one. As boring and cliche as it sounds, it pays to have safe sex, do your due diligence when it comes to partners, especially if you are not monogamous, and get frequent tests if you engage in high-risk behavior.

Science published the original study, and you can read it here.

Other Blooming Wellness blogs to check out: