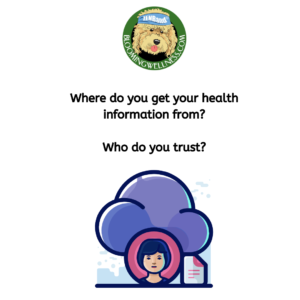 A few months ago, I was scrolling through a Facebook group I joined and saw a post from a woman who was inquiring what vaccines her new puppy should get. She wrote two, detailed paragraphs and was clearly hesitant about vaccines. One of the group Admins responded that the puppy would be fine without any vaccines. The woman responded, “Even Parvo?” She was referring to canine parvovirus, a highly contagious and deadly disease. I’ve read that the mortality rate is as high as 90% in dogs that don’t get treatment. There IS a vaccine for Parvo, which, EVEN if you have vaccine hesitancy, is a no-brainer in my mind.  The Admin wrote back that she’s seen many unvaccinated dogs survive Parvo. The woman seemed to believe her. I jumped in and said I highly, highly recommend that she get the Parvo vaccine. While I haven’t seen a dog die of Parvo, my father, a veterinarian, has, and from what he tells me, it’s a horrible way to go, with a lot of suffering in between for the animal. Subsequently, I was attacked by the Admin and her gang of followers, who informed me that they know more about the immune system and Parvovirus than I and my dad. ( For the record, I have an MD and MPH degree and my dad’s a VMD, but in these types of groups, credentials are  Scarlet Letters.) The conversation devolved into a wasteful thief of time, so I left the group.

I belong to a lot of natural health and wellness groups on Facebook and online forums. In fact, I have my own Facebook group. While I’m active in my own group, and try to weed out the completely unscientific nonsense when I find it, I don’t interact much in other groups. Instead, I like to observe and read what people are concerned about, who and how someone responds, and what the recipients decide to do with that health information. These groups are very popular and group members are enthusiastically engaged. Many posts have over hundreds of comments, and people give out health advice on a range of  topics. As far as I can tell, many of the group Admins don’t have advanced degrees, but they do have a talent for portraying themselves as health and wellness experts and gaining a loyal following. Many tell powerful personal stories, some with photos, that even made me second guess things I thought I “knew.”  Many voice legitimate concerns: prescription drug side-effects, GMOs, choice and vaccine schedules, the effects of Bayer-Dole, the medicalization of birth. Those are all things I’m concerned about too, and I think those conversations are healthy to have, though perhaps with a little more balance. They also dive into territory that’s more risky. People often post photos of rashes, skin lesions or sores and ask the group to identify them. A lot of people ask the cringeworthy question, “What supplement is good for (insert ailment here)?” and will  get a pile of recommendations. I’ve seen CBD oil recommended so much- for sleep, migraines, fibromyalgia, anxiety, the dog’s anxiety- that I want to ban the word from my eyes, ears and vocabulary. This type of wellness advice and peddling of supplements, cleanses and detoxes is part of the reason I wrote my parody, Yours In Wellness, Krystal Heeling, which takes on the sleazy side of the business of wellness, or the Wellness Industrial Complex. I hope you read it or listen to the audiobook, because while it’s a parody, it brings in a lot of current events.

The thing is, we have a health information crisis in this country, the sources of which are becoming more and more divided into two opposing camps that view each other as the enemy. Much like our political system, there’s a lot of tribalism. The thousands of natural health group members view “natural” and “holistic” and “supplements” as GOOD and traditional doctors, medical procedures and prescription pills as BAD. Similarly, traditional doctors view “holistic” and “alterative health” proponents as BAD (or Quacks) and “traditional” as GOOD. Both sides ignore their own shortcomings and the tribalism is only growing, both online and offline, which leaves me wondering: What will the future look like? Will we live in a world with no experts or one where everyone is an expert?

Then I ask myself this important question: Why would anyone believe someone with no scientific education or training over a person who has trained and studied for years and years and years? It must be a lack of trust in the traditional system. Why the lack of trust? Well, part of the reason is the obvious influence Big Pharma has over traditional doctors’ education system: them funding med schools and continuing medical education, paying high consultant fees to doctors,  published research that is biased towards drugs , and the drug companies having the largest lobby in DC. In fact, I’m happy about the online forums and groups that exist to hold the system accountable. The prescribed harm community comes to mind. Also, there are folks with chronic issues that weren’t fixed by traditional medicine, causing them to seek out other options that worked. The traditional community would be better off listening to those folks’ stories and championing ways to better evaluate these options, instead of not listening and waving it all away as quackery. I think a more open-minded approach would help improve the tribalistic health information crisis we are experiencing now.

When people say traditional healthcare is evidence-based, they’re right. It is. Drugs cannot be approved without carefully executed randomized controlled trials. But it’s also heavily, heavily, heavvvvvily profit-based. Where “evidence” and “profit” find an altruistic equilibrium, you got me. I write this as someone who worked as a ghost medical writer for several drug companies and doctors who were paid by them. Let’s just say that some doctors published in top journals didn’t even necessarily read the articles they wrote. Some of the marketing pieces I wrote to influence doctors to prescribe such-and-such a drug are cringeworthy. The process makes one feel…dirty.

This health information crisis is chaos, and therefore fertile ground for mass misinformation, conspiracies, and the end result of people not having a clue about what’s actually going on or who to trust. For example, I know the Anti-Vaccine movement is heavily influenced by Facebook groups and vaccine hesitancy is only growing. Then yesterday, I read an article that President Trump’s vaccine czar has 12 million worth of shares in Moderna Therapeutics, the company leading the coronavirus vaccine development. That’s a massive, highly publicized conflict of interest that only fuels distrust in traditional healthcare. But that’s one of many conflicts of interest. ProPublica, who has been tracking drug company payments to doctors since 2010, discovered that at least 700 doctors were paid a million dollars by drug and medical device companies. Many more were paid amounts closer to 500,000$. Does that read like a system that builds trust?

I don’t know what the answer is going forward. I just know that I’m inspired to blow whistles and start a conversation about it.

Is it your first time? Use code ZEN for 20% off a ZENBand.

Grab a copy of Yours in Wellness, Krystal Heeling on Amazon now.