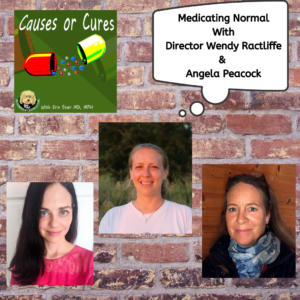 What does medicating normal mean? Does it happen? Should we refrain from medicating emotions and feelings that are perfectly normal given the circumstances? These and related topics will be discussed in this Causes or Cures podcast episode.

In this episode , I chat with Wendy Ractcliffe and Angela Peacock about the documentary film, Medicating Normal. Wendy is a director and executive producter of the film and Angela, a combat veteran, is featured in the film. Angela is also a social worker and part of the film’s outreach team. We’ve been chatting off and on about how to get more veterans to see the film. It’s no secret that veterans, at any age, are often given a lot of medication to cope with the invisible scars of war, and now more and more people are concerned that such a drug-heavy approach may be doing more harm than good. As a West Point graduate, I know about this firsthand. Many veterans have written me inquiring about more holistic approaches to anxiety, insomnia, chronic pain, stress, etc., and many have asked for resources to help them come off psychiatric medication. The latter is an area starving for more research. Coming off psychiatric medication can be frightening and awful for many people, and they need to know what help is available to them. In my experience, many traditional doctors are not well trained to manage it.

From their website, Medicating Normal is the “untold story of what can happen when profit-driven medicine intersects with human beings in distress.” The documentary follows Angela, a Naval Academy Graduate and his wife, a teenager and a waitress as they struggle with unexpected prescription side effects, polypharmacy, dependency and withdrawal symptoms from drugs that were taken as prescribed. Watching the folks in the documentary struggle with the plethora of side effects is tough, especially because they’re young and otherwise healthy and because they weren’t expecting such a fight. Having to manage side effects wasn’t on their radar, most likely becaue their doctors did not reliably inform them of the possibility. I experienced something similar firsthand, when I was a medical student. I was given an SSRI ( antidepressant) by a psychiatrist and took it as prescribed. About three-four weeks in, I didn’t feel better. I didn’t feel like myself. I felt like a tranquilzied blob that was detached from my emotions and feelings. I didn’t feel less depressed, instead I felt like my feelings where shoes stuck in gum. They were there but I couldn’t access or express them freely. I also had severe dried mouth. After about five-six weeks of being on them, my mind didn’t function properly. I made very hasty and impulsive decisions, one of which nearly cost me my life. I ended up quitting school, flying across the country and living with a mysterious man I met on the beach. No one knew where I was. The man, though helpful in many ways, was not who he said he was. Yes, this is a true story. Yes, it’s crazy. But it happened, and I’m lucky to live to tell about it. Though I can’t conclude that antidepressants caused me to have that experience, I often wonder if they played a role. Anyhow, if you’re interested in dark, fast-paced reads that will make you question a lot of things, I invite you to read Manic Kingdom.  It might make you scared and uncomfortable, though, so I don’t recommend it to everyone.

This podcast covers what “medicating normal” means, the importance of informed consent, the struggle to be heard and taken seriously, while not being labeled “anti-psychiatry,” how people overcame their unexpected struggle with prescription medication, the future of mental health and what optimal, long-lasting healing looks like. Angela not only gets very personal in the podcast, but she also shares her insight on how these topics relate specifically to the veteran community. I really hope you guys listen to it.

Other blogs or podcasts to check out:

Alzheimer’s Disease: The latest research and how to prevent it , with Dr. Douglass Watt