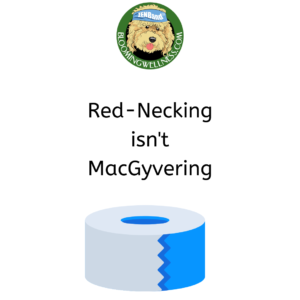 So, I have to say it: Red-Necking isn’t MacGyvering. I am posting a link to an Instagram video I made on this topic. I hope you guys watch it, because I’m seeing a lot of Red-Necking disguised as MacGyvering. Nope. Not going to happen. I know the difference, and so should you.

I hope you guys know who MacGyver was? Angus “Mac” MacGyver was a genius who worked as a covert agent for the US government. His knowledge of engineering, physics, electricity and bombs was on a level far above the average human. He was a brilliant on-the-spot innovator and could solve any kind of problem in a smart, clever and effective way. He was the real deal, and nothing he did involved duct tape. Unrelated to the point of my video, but still interesting, he supported solving problems without violence. He was also anti-gun and instead carried a Swiss Army knife.

Back to Red-Necking vs MacGyvering: Now, sometimes we all do a little Red-Necking and try to pass it off as MacGyvering. I do it, you do it, we all do it. We do it, because we’re imperfect people. Sometimes we do it because of time constraints, ego, not wanting to put in the work, not being smart or creative enough, or simply wanting to impress people. We have to forgive ourselves for the times we Red-Neck and pass it off as MacGyvering, and most importantly, never fool ourselves into believing they are the same thing.

Ahem. Okay, watch the video…but before you watch my short video on this matter, read this:

Just like all that glitters isn’t gold, and how loudness isn’t knowledge, and how a popular profile or spiffy website doesn’t make one an expert, and how who you know doesn’t make you talented, and how conspicuous social-media advocacy, relationships and Keepin-up-with-the-Jones posts are often mirages of one’s real life…this, too, is a friendly reminder that Red-Necking ain’t Macgyvering.

Just like all that glitters isn't gold, and how loudness isn't knowledge, and how a popular profile or spiffy website doesn't make one an expert, and how who you know doesn't make you talented, and how conspicuous social-media advocacy, relationships, and Keepin-up-with-the -Jones posts are often mirages of one's real life…., this too is a friendly reminder that Red-Necking isn't #Macgyvering . ???????? . . #lifequotes #rednecknation #macgyver #deepthoughts???? #expertise #genuine #healthblog #fillyourcup #wellnessthatworks #keepitreal #lifemoments #doctormemes #publichealth #therealdeal