What is the public health equilibrium? It’s a term I coined to describe the balancing act that is public health, which I’ll describe in this blog. This is my perception, vision, thinking and not anyone I work for or consult for. 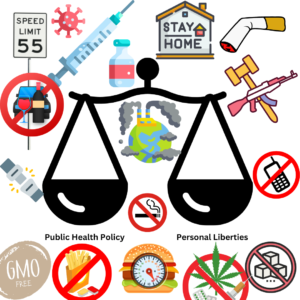 This blog was inspired by one of my recent tweets:

I don’t think the pandemic politicized public health. It just showed how nasty it can get. Politics is always involved in public health becaues much is about finding an acceptable equilibrium between protecting the health of the population and encroachment on personal liberties.

To understand this equilibrium, we have to go back to the fundamental difference between medicine and public health. One (medicine) addresses health issues at the individual level, so fundamentally there is more freedom involved. Particularly more freedom of choice when it comes to treatment and care. The other (public health) addresses health issues at the population level, where we don’t live in silos and our actions potentially impact those around us. Thus is the nature of being part of society. So before we dive into a debate about a paritcular intervention, we should ask ourselves if it is a medical one or a public health one. Once we understand that, it’ll help us better assess its need as well as risks vs benefits.

Unfortunately, I see many experts on social media, including doctors, journalists and scientists with no public health experience, confusing the two, which carries over into how they communicate to the public about the intervention. Sometimes they use coercion, shame, lead with their egos or think their expertise carries over into the field of public health when it does not. They, albeit inadvertently, end up angering and/or isolating large portions of the population and hurting their own cause. It’s a big problem since so much of public health is communicating with the public. Therefore, if you pollute the streams of communication and distort the public’s percpetion of public health in a negative way, you can do serious, long-term damage.

Since I’ve been a part of several public health initiatives, I want to give an overview of how one works. Almost every public health intervention that is funded by the government begins with political will. Legislators are ultimately influenced by a body of voters, lobbyists or advocacy groups and designate funds for a specific public health intervention. From there, public health experts take over. First and foremost, there is a budget, and someone manages that budget. Historically, these budgets aren’t much, hence the country’s uphill batle with prevention. There is usually a technical lead, or someone who serves as the “chief strategist” for how the intervention will reach fruition given the budget, timeline, and staff…, a project manager to deal with contractual elements, and then depending on the nature of the intervention…, public health analysts, epidemiologists, researchers, health communication specialists, data scientists, a creative team and more. Often due to budgetary constraints, public health people wear multiple hats. Let’s say the intervention is a communication intervention to vaccinate a particular population. A huge part of that intervention will be understanding how to connect to that population. So before any content or materials get made, there needs to be research. This research can include a rapid community assessment; focus groups comprised of members of the community you are trying to reach, followed by a qualitiative analysis and reports; surveys followed by quantiative analysis and reports; key interviews with trusted members of the community. Once the research is conducted, uusally an analyst or two will analyze the results and make a recommendation for how best to communicate with the population. This recommendation may include area of focus; what issues to avoid; what words to use and not to use; what photos to use and not use; what colors to use or not use, and what mode of communication (TV, digital, print, etc.) to use. Then the creative team steps in and designs a few message options. Next, if the budget allows, there is message testing. This can be in the form of a focus group or survey. I’ve done message testing with surveys, so I can speak to that. Basically, the population being surveyed, ideally representative of the folks you want to reach, provides feedback on the message options. (And usually, you partner with a contract research organization that does surveys and has access to various populations). The survey participants answer a series of questions. Then you get a bunch of data back from the company and make sense of it with statistical analysis. Guided by the results, you make recommendations for which message is best to use, when to use it, where and how. The data is often very rich and revealing, in the sense that you often find things that are counterintuitive. Then, boom: One or two of the message options (perhaps with tweaks and after an official clearance process) will see the light of day. You still aren’t done, however. Usually someone on the intervention team is tracking the success of the campaign, whether it be through number of clicks; number of sign-ups for something; or a particular action taken. Given budgetary constraints, if a campaign isn’t connecting for some reason, it will need to be stopped, tweaked and/or trashed.

So, a lot goes into one public health campaign that is rooted in altruism, decently funded and properly managed. Particularly a communications campaign. It’s not Checkmarked Experts shooting from the hip on Twitter, and when they do that under the guise of “public health communication”, hopefully you can now see why they inadvertently hurt campaigns, causes, or the field of public health in general. Further, folks on the inside, whether because of attacks or out of frustration, certainly risk being pulled towards playing defense for “one side vs the other,” and losing the equilibrium approach and vision. With the increased privatization of public health ( a topic worthy of scrutiny and its own blog post) there can be financial influence and corporate bias at play. The public health equilibrium is hard to uphold, especially today, but you must, or you risk losing a majority of the public.
How does someone make the public health equilibrium functional in a population with so many different political views, religions, backgrounds, and experiences? Well, it’s hard, and perfect will always be the enemy of good. It boils down to finding an acceptable equilibrium for the population. You will need to have conversations with the population and listen to them (including people who think far differently than you), be willing to compromise, meet people where they are, and make many adjustments. Ideally, you should also make adjustments based on the evolving science, and you certainly shouldn’t hijack public health communication if you don’t know what you are doing. Further, you might need to “let go” of certain elements of your public health intervention just so it can get off the ground. You also have to remember that public health is NEVER just one thing and never lose sight of the field’s intrinsic holistic nature, which includes access to education, housing, play, employment, access to healthy food, personal relationships, stress levels, sleep hygiene, mental health and more.
The other thing to remember is that politics will always be involved in public health. Back to my tweet, it often comes down to a balancing act between doing something to maintain the health of the population and encroachment on personal liberties. No one likes to acknowledge that, particularly in America, but it’s the truth, and the “politicazation of public health” certainly didn’t start with COVID-19.
For example, take the public health battle with public smoking. When the anti-smoking movement kicked off in the 1960s, and to limit public smoking, they had to find an acceptable strategy that wasn’t viewed as paternalistic or in violation of someone’s “right to smoke.” So they organized a campaign that focused on effects to bystanders, not the smoker. The tobacco industry and their hired scientists, in addition to calling the secondhand smoke science “junk” & “misinformation”, used America’s love of liberty & choice to try to keep state/federal governments from creating bans. The Anti-Smoker prevailed as a more powerful political force, and as a result, laws were passed.
Thanks for reading the Public Health equilibrum, gang. Check out some of my other “scicomms musings” here.
Don’t forget to check out my podcast here.
See you soon,
Eeks xo