This blog will focus on Credentialism and the Ant-Credential Movement in the realm of scientific discourse, but first, a quick joke: 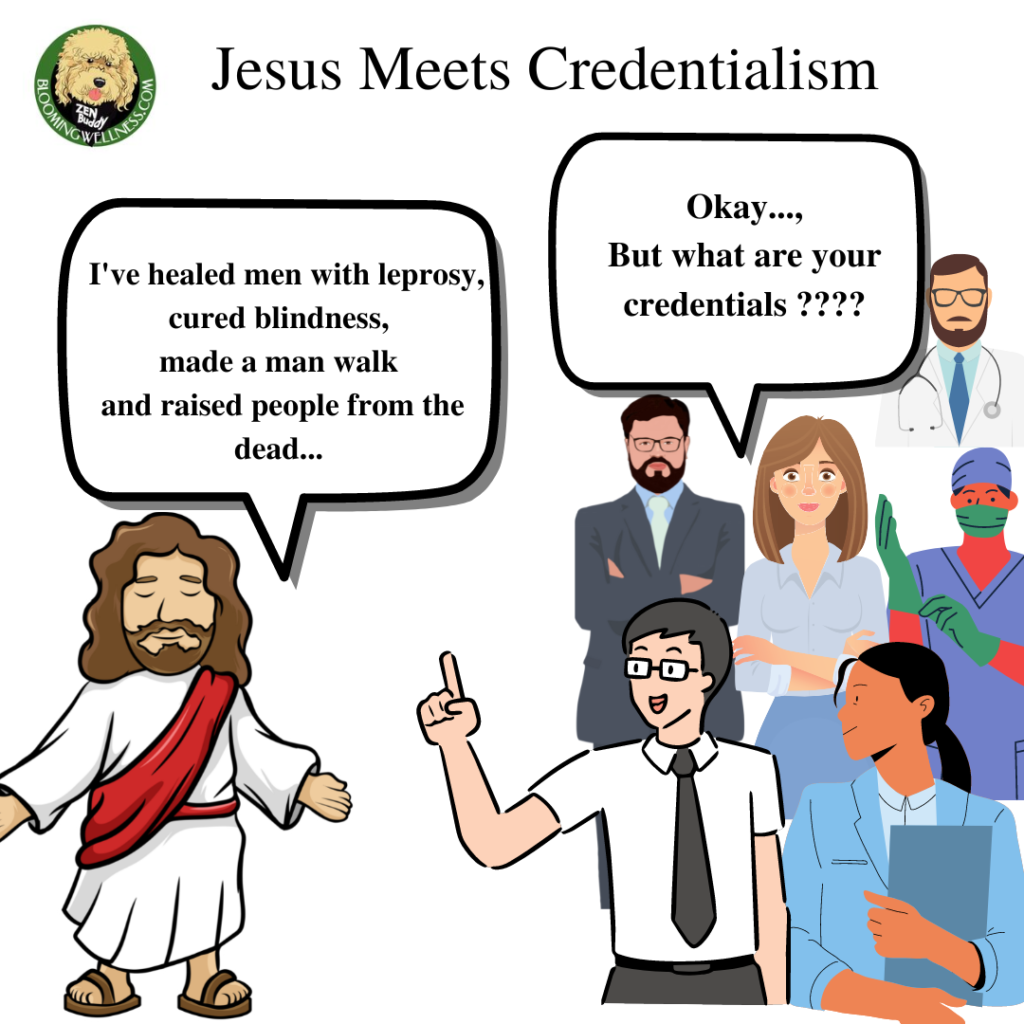 So, what is credentialism?

Essentially, it’s equating someone’s degrees and diplomas with his/her intelligence, capacity to do a job, and capacity to understand a particular topic. While traditionally it has been discussed in reference to employment, meaning a person needs a certain amount of credentials to get hired for certain jobs, I want to discuss its use in scientific communication.

“What are your credentials?”

When you see two people debating a scientific topic on Twitter (the digital equivalent of getting in a pissing contest with a skunk) one of them is likely to ask the other one, “What are your credentials?”  When two people are in agreement, that question rarely gets asked, as if it doesn’t matter what someone’s credentials are when he/she agrees with you. When you’re in an argument with someone, however, it’s a divisive question asked to tear down the other person: to tell him/her that she/he isn’t “qualified” enough to make a statement or even have an opinion. It’s shots fired by intellectual snobs.

Credentialism is awful, but credentials do matter.

Credentials show that a person completed a particular program, obtained a standardized education, took specific courses and past particular exams. They might tell us if a person is qualified to perform a specialized job. Credentials help us better understand the educational background of a person, and in combination wth a person’s experience, tell a more complete story and give us a better idea of what kind of “source” someone is. For example, we all love our dogs. If our dogs had a health emergency, I think we’d all want to consult a person who completed veterinary medical school, not someone without a degree who gives health advice about dogs on Instagram. In my experience, credentials matter more to a person as the severity of one’s health issue increases.

In some health and wellness circles there is a noticeable backlash against credentials. Credentials, such as mds, phds, mphs, have become synonymous with an evil, for-profit health system run by Big Pharma. Health professionals are pill-pushing zombies in white coats who give us nothing when it comes to prevention, because more sickness equals more money, and it’s all about money. These groups want nothing to do with people with credentials and instead put their trust in people with far less credentials, if any, who promote a more “natural” and “holistic” approach to health and often have great disdain for the traditional system. In some cases, the folks they trust are overly confident contrarians who purport to know more than they know, thereby creating channels for inaccurate information.

In my opinion, this is an unfairly reductive take. Both credentionalism and being anti-credentials are forms of snobbery and Know-It-Allism. It’s as if to say the majority of clinicians, researchers and health scientists are brainless, weak and blindly following Big-Daddy Pharma, and only those “outside the system” think and ask questions. That’s not true. No matter how much you hate Big Pharma, that’s not true. If you think it’s true, you need to talk to more health professionals, because they come with varied ideas, thoughtful and empathic questions,and different levels of dissent and agreement. This is especially true for the majority of health professionals not seeking social-media fame. Social media is an environment that caters to reductionism, particularly being assigned to one side or another (It’s 100% better for your “likes” and “follower” counts to “choose a side”), so this is naturally something social-media-active health professionals (or anyone) risk being sucked into.

The logic for the persistence of the anti-credential movement is not rocket science. As long as profit remains the driving force of our healthcare system…, as long as we promote pills, pills and more pills…as long as people can’t afford medications and treatment…as long as Pharma lobbyists have immense influence over our politicians and regulators…as long as Pharma ad money pours into conventional media outlets and medical journals (keeping them all afloat)…and as long as our strategy towards prevention is toothless bites, more and more people will grow distrustful of the credentials required to operate such a health system. Not. Rocket. Science. The way to beat the anti-credentials movement is to rebuild our health system so it puts people over profit and invests meaingfully and wisely in prevention research and proven preventive strategies.

An uncomfortable truth for those with credentials: There are no credentials for wisdom:

While credentials are important, there are no credentials for wisdom. It’d be nice if there was, but there’s not. This means there are very wise people out there, with credentials or not. Heck, the wisest person on earth may not have any credentials. In many ways, having credentials is a privilege. Credentials come after having access to schools, committing to go to school, and having the money to pay for such schooling. Some wise people don’t want to make that commitment, don’t have the right life circumstances or can’t afford it, especially if you’re in America where student loan debt haunts many to their graves. Further, professional schools and health and scientific boards (the “Credential Police”), make a lot of money from granting credentials, renewing credentials, requiring continual credentials, etc. Selling credentials is a profitable business and not every wise person in the world wants to invest in them. But one thing is always true, with or without credentials: Wise people tend to be curious people, so we shouldn’t be surprised if they come from all walks of life, take an interest in a particular topic, read about it, ask challenging questions and make good points.

Credentials or not, wisdom or not, anyone can take interest in a health or scientific topic:

Anyone can write a blog, ask questions, make statements, and express opinions, some harsher than others. Perhaps a person with no credentials assumes his/her understanding is better than it is in reality. Perhaps a person with credentials needs to do a deeper dive into the foundation and funding of educational institutions and healthcare systems. Perhaps many of us sound like know-it-all jerks when we speak or write. Perhaps most of us need to get better at saying we don’t understand something entirely. Ultimately, everyone is trying to gain a better understanding of the world. Therefore, in the realm of scientific conversations and debate, no one should ask, “What are your credentials?” It’s a question that only divides and does nothing to promote a healthy discourse.

You’re not a fan of  credentialism, but you have credentials, know more about a scientific topic than the average Joe, and want to make that known:

If you are a person with credentials and years of scientific experience and read something someone writes that is false or misinterpreted, don’t ask him/her, “What are your credentials?” It’s not going to help that person understand the science better. It’s going to make you look like a feeble, insecure, elitist snob. Instead, stick to the topic being presented, and if you choose to challenge the subject matter, stick to the subject matter. You don’t have to attack the “poster” of the information or his/her credentials at all. In fact, you never have to attack the other person. When you do, it’s a sign of a fragile ego, an inability to control your frustration and/or a weak argument.

Thanks for reading, guys. Feel free to check out some of my other scientific communications musings:

The ridiculous panic over misinformation

Truth-Seeking, a Caveat to be Aware Of

Check out the Causes or Cures Podcast