My friend recently sent me a photo of a NYC health department ad on the subway, with the text, “Can you believe this?”

Here is a screenshot of the ad: 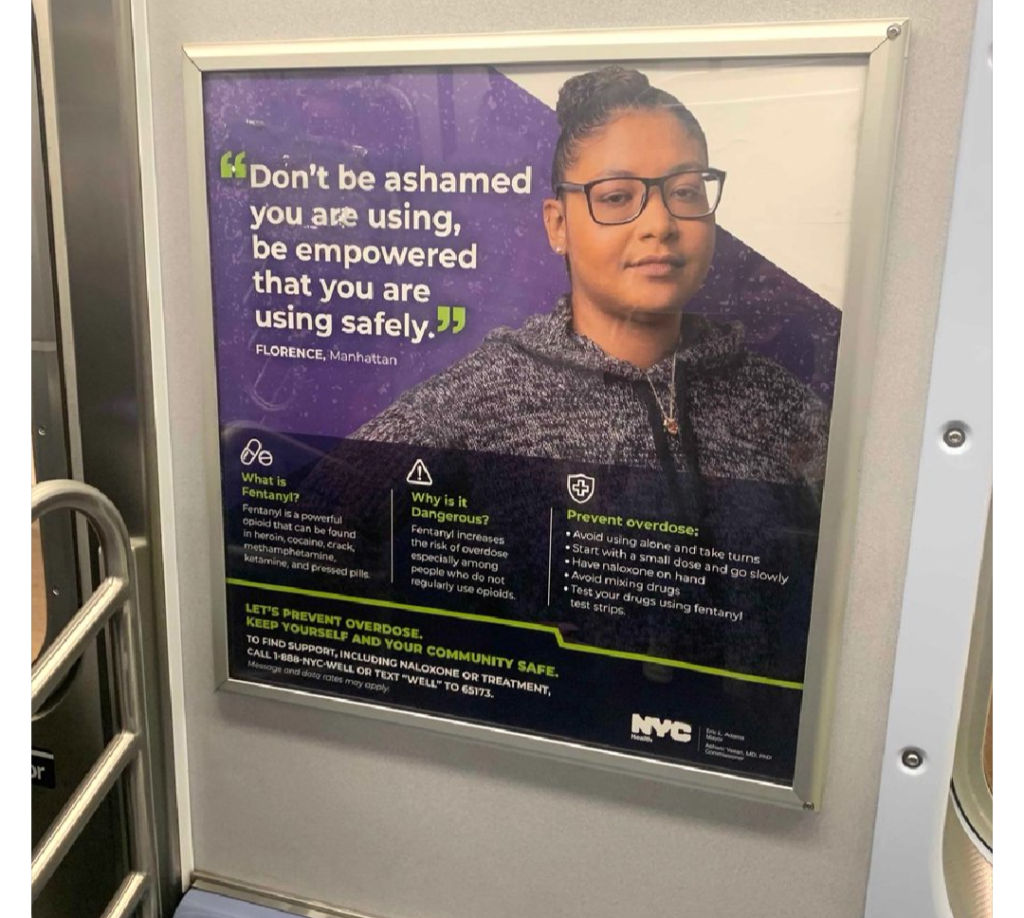 It reads, “Don’t be ashamed you are using, be empowered that you are using safely.”  The small print (which no one is talking about), describes what Fentanyl is, why it is dangerous and ways to prevent overdose, which include not using alone, starting with a “small dose”, having naloxone on hand, avoiding mixing drugs and using Fentanyl testing strips (which are strips that detect fentanyl). There’s also no mention of the long term effects of overdoses (it’s not just death) which could be an interesting avenue to explore in terms of communicating to the public.

A lot of folks on social media were upset with this ad, and honestly, I can understand why.  I don’t know if the NYC Health Dept did any prior message testing to see how the public would react to this ad, but I would call it a hit and a miss. Message testing is essentially doing a survey to see how people react to the displayed ad. Of course the Catch-22 with message testing, especially for a sign displayed on a train taken by millions of people with varying beliefs, politics and opinions, is that your sample population should reflect that variation in beliefs, politics and opinions. That does not always happen.

The Dept of Health meant well, in that they were emphasizing that drug addiction is a disease, and there shouldn’t be any shame in having access to supplies/drugs/people/places that would help someone use safely. The ad is timely, because people are dying at an an increased rate from fentanyl overdoses, and fentanyl is being put in everything today. So even a recreational pot smoker might be at risk. I encourage you to at least have fentanyl testing strips if you are going to use drugs. I also think the ad would have been fine in certain locations, just not a subway.

The critics on social media reposted the ad with commentary like, “NYC says using fentanyl is empowering!”  FOX news picked it up here: NYC’s heroin-fentanyl poster sparks anger from Top City Council Republican. It made it on the Tucker Carlson show where he interviewed Gina McDonald, co-founder of Mothers Against Drug Deaths, where she and him blasted it– particularly that word “empowering.”

Here’s the thing, and as someone who has analyzed public health data and done work in scicomms at the federal level, I feel comfortable saying this: 99% of public health is communication. It’s connecting to your target audience. Public Health is a science that addresses issues at the population level, meaning you are dealing with folks with different understandings of the world, opinions, backgrounds, different religions and politics. Because of that, you will never write a health message that pleases everyone. Not a chance. But at the same time, it’s a public health professional’s job to try to connect with as many segments of the population as possible. If a public health professional consistently resonates with a fraction of the population while consistently isolating or “turning off” another, that public health professional is failing. (See COVID response, ahem.) And not to go full West Point (alma mater) on anyone, but “it’s too hard” or “it’s too political” or (“whatever…insert here”) is not an excuse for a leader. A leader’s job is to look at his/her playing field and figure it out. Maybe you need to build something new, maybe you need to be super creative,maybe you need to reevaulate your approach…whatever. It’s a leader’s job to take his/her cards and figure it out.

Back to this particular ad…it turns off large portions of the population who view it as encouraging drug use in their communities. The person in the ad looks young, so parents might see it and view it as promoting drug use for their kids. We can talk about the relationship between political affiliation and public health, but for now, let’s just say that many folks would view this ad as irresponsible. I think the word “empowering” is the nail in the coffin for many.  What would I have done? I would have told the health department to focus on “protection” vs “empowerment.” Write a message about how safe drug use protects inidividuals, communities and overdose deaths. I never would have went with “empowering.” And by the way, if you talk to a lot of folks struggling with drug use, many of them will tell you that it is far from empowering. It’s awful and agonizing.

While I think the intent was good here, the ad misses the mark.  That said, it’s not at the level of South Dakota’s 2019 state-wide anti-meth campaign that the internet had an absolute blast with. God bless’em, but their ads made it seem like everyone was doing meth, having an okay time and wanted everyone else to do meth too. Here is a screenshot of that campaign to remind you: 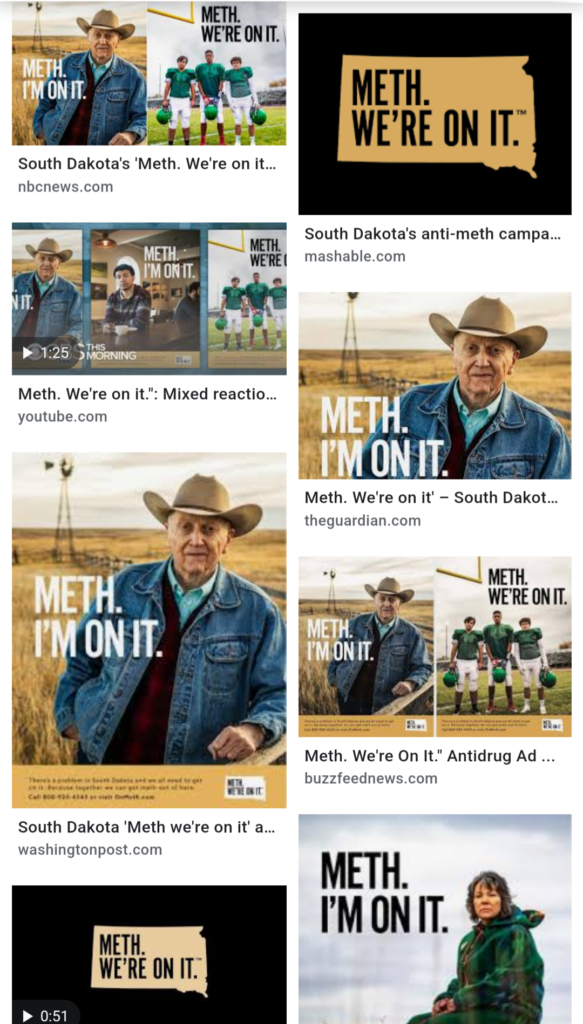 Other Health Comms Musings to check out:

Truth Seeking: A Caveat to be Aware Of