My quick review of Watch the Water: 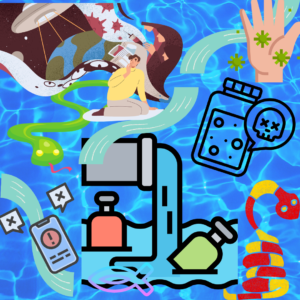 A few people wrote to me on social media and asked me what I thought about the recently released documentary, Watch the Water. I hadn’t seen it or even heard of it, so couldn’t offer anything substantial. Then I started seeing posts about “snake venom” on Twitter and Facebook and realized they were related to Watch the Water. So yesterday I found it on Rumble and sat down and watched it on my lunchbreak to try to understand the connection being made between snake venom and COVID-19.  Below is a quick summary of my thoughts.

Watch the Water is not much of a documentary. It’s really an interview between Stew Peters, a radio and TV host, and Dr. Brian Ardis, who I believe is a retired chiropractor. Dr. Ardis talks about going on Infowars and sharing concerns that monoclonal antibodies for COVID-19 may not be safe. Then he discusses receiving a text message from a friend and fellow doctor: “Hey Dr. Ardis…, if you got bit by a rattlesnake, would you go to the hospital and get antivenom?” which he said perplexed him but eventually made him think about snake venom and COVID-19. “That’s where it all started,” he tells Stew Peters. He learned that antivenom was either monoclonal or polyclonal antibodies and discusses how the CDC does not “want you touching monoclonal antibodies” and “they totally stripped out monoclonal antibodies” in January of this year.

After that portion of the interview, I started to gather what he’s essentially saying: that COVID-19 is actually snake venom and the monoclonal antibodies are antivenom. He talks about the components of snake venom and how it attacks various organs and makes comparisons to how COVID-19 kills people. That didn’t strike me, because many diseases or molecules have similar mechanisms of action or similar chemical structures. What I didn’t realize until later in the documentary was that he seems to identify monoclonal antibodies AS antivenom. I thought he would clarify for folks that there are many different types of monoclonal antibodies out there. “Monoclonal antibody” is a general term. A monoclonal antibody comes from a single B cell (type of immune cell) clone, and it is designed to bind to a specific target. They are a made in labs and have a wide variety of functions, such as treating cancers, infections, autoimmune disorders and for diagnosing things. Antivenom is another example of a monoclonal antibody. How might one make snake antivenom? By taking venom from the snake, injecting a small amount into an animal (like a horse), the animal would develop antibodies, and those antibodies would be collected to serve as antivenom.

Once you understand that monoclonal antibodies are more than just snake venom, the documentary loses its plot in a major way.

The documentary’s presentation of Remdesivir (an antiviral drug made by Gilead that is FDA-approved for use in adults and kids over the age of 12 (who weigh more than 4o kg) if they test positive for COVID-19 AND are hospitalized or have a high risk of being hospitalized) is somewhat confusing. It’s true that healthcare professionals have varying opinions about its effectiveness (for example, the WHO recommends against it), but I was confused when Ardis seemed to imply that Remdesivir was snake venom and then went on to imply that COVID-19 was also snake venom. Perhaps I have to watch the documentary again, but that did not make sense to me. He also points out that Remdesivir increases prothrombin time (a lab measurement for how well one’s blood clots) and then points out that snake venom does too, I suppose to encourage the viewer to see them as one in the same. The major problem with that sort of thinking is that a lot of things (viruses, medicines, etc) can increase prothrombin time. It’s not a hallmark for any one disease or medication.

But what about this “Watch the Water” part. Later in the documentary, you learn that Ardis is convinced that COVID-19 is not a virus, but actually snake venom, and that the CDC (and contractors who work for them) are putting it in the water supply. Ah, okay, that’s where the documentary’s title comes from!  I don’t know if he believes that the CDC and contractors are doing this to water supplies around the globe, as he never clarifies this, but it’s worth considering since COVID-19 is not confined to the US. He also never identifies a motive for why the CDC and its contractors would want to kill a bunch people. Mr. Peters then asks how they can put it in the water supply, and Dr. Ardis points to the CDC’s National Wastewater Surveillance System (NWSS) for COVID-19. He seems to imply that the wastewater surveillance system is actually a front for poisoning the water supply with snake venom (in his mind, also known as COVID-19). He brings up the issue that the CDC states that wastewater surveillance may help us predict outbreaks. Then, in what’s supposed to be a “gotchya moment”, Mr. Peters states that “is backwards” and that once the virus is in the wastewater, it’s already out of your system and the outbreak would be in full throttle or on its way out. I can see how people would believe that, but it’s not accurate. Remember, once a person gets infected with COVID-19, he/she may not show symptoms for a while. You might recall the concern over asymptomatic spread of COVID-19. Despite no symptoms, the virus is still inside them, would shed and possibly be detected in the wastewater, in which case you could use that data to predict a community outbreak. There is still a lot of work to be done on using wastewater-based epidemiology for predicting COVID-19 outbreaks. There are also a lot of factors that can influence its utility, such as transit time in the collection system prior to arriving at the wastewater treatment plant, sensitivity of measurements, and quality of the sample. That said, it is a well-documented form of disease surveillance, particularly for detecting outbreaks early.

Religion, particularly Christianity, comes up often in the documentary. Dr. Ardis appears to think COVID-19 is a religious battle, a good-versus-evil type of thing. He seems to believe that the COVID-19 vaccine (which uses genetic material to teach our cells how to make the spike protein) is a ploy to make us part human and part serpent. Since the serpent represents Satan in the Christian faith, that really means part human and part Satan. That sort of thinking might resonate with Christian fundamentalists or religious types who see everything as an act of God or an act of Satan, and they might be even more inclined to believe it’s true with the eerie background music and the lack of any pushback. Perhaps those people make up a large portion of Peter’s audience (I don’t know as I didn’t look into it).  If you believe the vaccine is designed to make us part human/part Satan, I don’t believe there is anything I could write that would convince you otherwise. All I will say, however, is that you’re late to the party. We already share genetic material with snakes! For example, this 2021 scientific article discusses the shared genetic origin between oral venom systems and salivary glands in mammals, including humans. Before anyone freaks out, I encourage you to consider the good things snakes do. For example, snakes eat mice that are vectors for Lyme disease, so they can therefore help control the rodent population and Lyme disease. Sometimes I feel bad for snakes. They always get a bad rap but being dubbed a double for Satan did them no favors. It’s similar to the wolves being portrayed as the “Big, Bad Wolf” in fairy tales. The truth is that humans scare me a hell of a lot more than snakes and wolves.

In conclusion, I would have to say that the documentary is rooted in conspiracy and religious symbolism, not science. I don’t mean any disrespect, happy to have a coffee with anyone (including the two dudes in the documentary), but my obligation on my blog, to my readers and myself, is to be as honest as I can.  I’m also drinking a tall glass of tap water as I type this, no venom to be found… 😉

Thanks for reading my review of Watch the Water. Feel free to let me know your thoughts in the comments below. Also, feel free to stick around and check out some of my other musings and/or podcasts. A sample menu is below:

Truth Seeking: A Caveat to be Aware Of

War and the Art of the Napkin Risks Benefits Analysis

Thanks and talk soon,