The Caveat of Truth-Seeking: 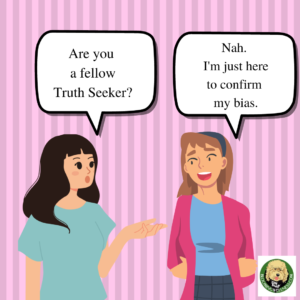 “Criticize crony-capitalistic influences. There’s enough legitimate material there. Try to avoid conspiracy theories that will make it harder to be taken seriously and create viable, positive change. If you aren’t sure where something stands, ask more questions.”

I don’t like to give advice, so view this as my philosophy when it comes to truth-seeking. And if it resonates with you, great. If it doesn’t, well there’s that too. But here goes an explanation:

When it comes to truth-seeking, be careful what hill you choose to die on. In order to create real positive change, you still, in some capacity, need to be a part of the system you desire to change. That’s why it is important to not stray too far down a rabbit hole or alienate too many people. You will have a much tougher time accomplishing real change. In fact, if I was an industry stakeholder and wanted to throw off my critics, I’d feed them colorful conspiracy theories about my industry. Smart critics wouldn’t fall for it, but I’m confident enough critics would (especially the most vocal ones) due to high emotions, internal biases and a sense of action-hero excitement. Then I’d feel more comfortable and secure that my loudest critics were chasing decoys or proof that doesn’t exist and will end up looking like fools. In the meantime, no one makes me change (like, really change), and I continue doing what I’m doing.

There is more than enough actual and unquestionable evidence to jump on and use to change a system for the better. By better, I mean a system that works for people over profit. There is so much real stuff out there. For example, on my Causes or Cures podcast for 2022, I am focusing on industry’s influence on health and healthcare policy that biases the system towards profit over people. I am also focusing on the opioid epidemic, which certainly is linked to industry’s influence and unethical practices. There are tons of published and corroborated studies out there. There are researchers who study this stuff for a living, and some of them have agreed to come on my podcast. There’s no need for me to push anything conspiratorial when I have so much real stuff to work with. Knowing that also allows me to feel good that I’m not using my podcast to fuel conspiracy theories or feed my listeners answers where questions belong. I’m able to sleep at night knowing that I’m not harming anyone by being deliberately conspiratorial or misconstruing the complexity of an issue to fuel a particular base. I may not get it right every time, but I am committed to being honest and doing my best. Being able to sleep at night is important to me. (My brain goes batshit when sleep-deprived.)

As much as I’ve criticized “mainstream” narratives and crony-capitalism, it’s also true that consistently being contrarian or conspiratorial just to be contrarian and conspiratorial is a thing, and it’s a profitable thing. Like a sex-infused, bad-boy romance novel, it has mass appeal and immense commercial value. It’s simplified and easily digestible. When smart, provocative people are consistent contrarians and/or conspiracy theorists, their followers feel good. They feel content and comfortable with their views and consistently come back for more confirmation. Their view of the world makes sense when they listen to this guy or gal and only this guy or gal: this is “bad,” and this is “good.” Simple. Comfortable. Easy. Their chosen leaders don’t challenge them, just fuel them. But…why is that? If someone is truly dedicated to searching for the truth, why does he/she never challenge their own views or the views of his/her followers? Why does he/she never point out the complexities and grey areas of a situation? Why do they only highlight evidence that supports their narrative and downplays anything that does not? (After all, don’t they criticize “the other side” for doing exactly that?) Why do they never substantively criticize the “people on their side” but constantly criticize “the people on the other side?” Are their lives that simple?  I can say my life has never been that simple. I know most people only like to hear what they want to hear, are painfully unaware of their internal biases, like simplified explanations and instinctively take sides. The Truth isn’t like that though. I recently wrote on Twitter that “the truth sits alone at lunch.” It sits alone, because it’s not into taking sides and eventually pisses everyone off. Remember that when you are out there truth-seeking.

Once you’ve become consistently contrarian or conspiratorial as a job, you’re no longer a truth seeker. You’re certainly not independent. You’re most likely doing what you criticize the mainstream of doing: Upholding a narrative at all costs. It’s just a new narrative. Congratulations- another puppet in the system but with a new puppet master. More sheep, just in a different pasture.

My theory to why people (bloggers, Youtubers, public figures, writers) are consistently contrarian, consistently criticize one side but not the other, or consistently fuel their chosen narratives, is that they realize it is more profitable to do that. Fueling their base makes them more money than sometimes criticizing “their” side, admitting wrongs, or attempting to present the greys and nuances of a situation. It’s more ad money, more subscriptions, more book sales and more blog hits. A less biased, more truthful approach is not as profitable: it is inconvenient, annoying and makes people angry and uncomfortable, because they want to hear what they want to hear. They want answers they like. They want to be told that they are right.

“Truth-seeking” does not mean bashing the entirety of a “mainstream” narrative in order to fuel a base and make money off of that base. That’s manipulation, though some might call it “just business.”  Truth-seeking shouldn’t be motivated by profit, ever. So, who do we trust? How do you know someone is being honest? What’s the best way to seek truth?

My 2 cents: Ask questions, don’t fall for easy answers, and be skeptical of people who purport to have all the answers.

Don’t spend your money easily. Follow the money for everyone and everything. The lust for money, power and status is universal.

There are bullshitters everywhere, so do not give your trust away. Be skeptical of people who consistently criticize 1 side and never the other. Be skeptical of the Limelight Seekers and talk to smart, hard-working people who aren’t looking for follows, likes or sales.

Don’t jump to conclusions but look at the hard evidence in front of you, offer criticism based on that evidence, and hold people accountable if they behaved unethically.

Talk to many people, not just people who believe what you believe or tell you want you want to hear.

Don’t be afraid to admit that you might be wrong.

Don’t be afraid to have your views challenged.

Don’t be afraid of uncertainty, in fact, learn to thrive there.

Don’t get trapped chasing conspiracy theories at the expense of real, positive change. Remember where the Truth sits at lunch, and you’ll be okay. You won’t get it right all the time, but you’ll be okay.

Critical to this truth-seeking process is becoming aware of your internal biases. How does one become aware of their internal biases?  It is an exercise in building self-awareness. And it’s a life-long exercise. It requires ditching our egos and being open to being wrong. It’s a meditative exercise in that we should do it without judging ourselves and others. It’s asking more questions and learning to not be so fast to attach to an answer or attack “the other side.” It’s learning to see the world as shades of grey and less as sides to be taken.

I don’t have an instructions manual on how to do this exercise in self-awareness. In some ways, just knowing you should do it in order to get closer to the truth is extremely helpful. Creating more self-awareness starts with the awareness that you need to create more self-awareness. Everyone might have a unique path for doing that. I view it like getting to know myself, and to get to know myself, or anyone, I ask questions. Then I make observations. For me, it’s a series of questions, observations, questions, observations, and so on. This is a helpful exercise for most areas of life, but in terms of figuring out your internal biases, some tips you might consider:

Please don’t get sticky. Once you attach to answers, it can be a weakness if your ego takes over and you become more concerned with defending an answer and being right than seeking truth. You become much easier to manipulate.

If you want to create a system that works more for people than profit, you’ll have to challenge powerful industries and their allies. It’s not a war, no, but some principles for remaining level-headed in battle could apply. Remember the quote from the Art of War:

In summary, if you want to create positive change, consider the importance of figuring out your internal biases so you are not easily manipulated or duped. That process will genuinely will get you closer to the truth.

Thanks for reading. – Eeks

In addition to this bit on truth-seeking, some other things from the blog that might interest you:

The United States of Comorbidities

It’s not a Misinformation Problem, It’s a Trust Problem

5 Responses to “Truth-Seeking: A Caveat to be Aware of”