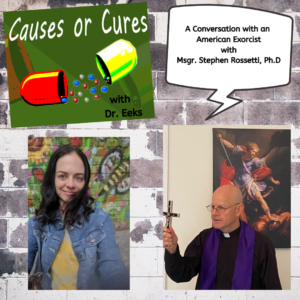 Not too long ago, I read an article about a priest who did exorcisms. He had just written a book called A Diary of an American Exorcist. It intrigued me, so I ordered a copy and read it. It’s exactly that- diary entries written by a priest describing various experiences at the exorcisms he conducts. Aside from Hollywood’s take, most of us don’t know much about exorcisms. Certainly not the specifics. Growing up Catholic, I knew that priests performed exorcisms, but that was the extent of it. We did have family friends who said their new house was possessed. I remember them saying that their little boy was possessed and scratched the word “Jesus” into one of his toys. I have no idea what their case turned out to be, but I’m fairly certain that they at least had the house blessed.

Anyhow, I reached out to Msgr Rossetti, the author of a Diary of an American Exorcist and he graciously offered to come on Causes or Cures and answer some questions about exorcisms. He has conducted hundreds of exorcisms, and as you’ll learn in the podcast, he continues to get many calls a day, though not all of them will turn out to be actual possession cases. In this podcast episode, he will describe what it means to be possessed and how possessions manifest, how one discerns possession from an underlying mental or physiological issue, who Spiritual Sensitives are and why they are important, what happens during an exorcism and some of his scarier moments, how long exorcisms take, how demons manipulate technology and what he says to the doubters. You don’t have to be a believer to listen to this podcast. At the least, it’s an education into what goes on at an exorcism, the details of which are not widely shared with regular people. Oh, he’ll also talk a little about how he became an American Exorcist. It’s not a common thing you hear: “I want to be an Exorcist when I grow up.” It’s unique. You might hear someone say he wants to be a priest when he grows up, but not an Exorcist.

Msgr. Rossetti also has a Ph.D in psychology and is a licensed psychologist, which I found intriguing. Part of the exorcism process is to make sure the person isn’t actually experiencing a mental or physiological issue. Given that Msgr. Rossetti has his doctorate in psychology and has treated many people for psychological issues, he is equipped to do this. He is a graduate of the US Air Force Academy, serves as President of the St. Michael Center for Spiritual Renewal and is a research associate professor at the Catholic University of America in Washington. He helped create the app, Catholic Exorcism , which provides deliverance and exorcism prayers in English and Spanish, and he also maintains an active blog.

How does a podcast about exorcisms tie into health? Well, my holistic approach to health includes 3 main elements that ideally should be in a harmonious equilibrium with each other: Mind, Body, Spirit. Not everyone views health that way. Some people don’t believe in a spiritual dimension at all. I do. Therefore, my view of and approach to health will naturally be different than someone who believes only in the Body or the Body-Mind. I plan on writing more about this, because understanding how one views health is fundamental to understanding how he or she approaches it. For example, if you go to a therapist/doctor who believes in a spiritual element, well his/her approach to helping you reach optimal health will probably be different than someone who doesn’t. It’s tricky, because the spiritual element involves faith, and while science and faith are not incompatible, science can’t explain things rooted in faith. Because of that, some people disregard faith altogether. But more on that later (And I promise I will write about this, because I think it’s important.)

To listen to an American Exorcist: A Conversation with Msgr. Rossetti, please click here.

Finally, thanks to all who listen to, share or subscribe to my podcast. I am so very grateful. I hope you appreciate the variety and depth of topics and if you have a guest or topic suggestion, just contact me and let me know. If you get a chance, do something kind today.- Eeks.

You may also enjoy:

Epistemic Corruption: Drug Companies and the Body of Medical Science

3 Responses to “An American Exorcist: Interview with Msgr. Rossetti”