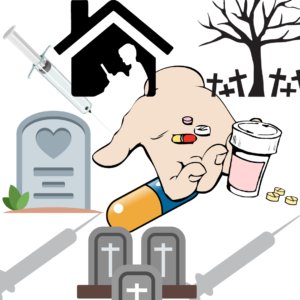 Drug overdose deaths are on the rise, as highlighted in a December’21 report released by the National Center for Health Statistics. I follow the opioid epidemic closely as one of the public health initiatives I work on has to do with opioid abuse and community-level initiatives to stop it. That, and it’s killed a lot of people I graduated high school with. A few others, including a once sweet and talented athlete and friend, is in jail for robbery which he took up to fund his opioid addiction. Good friends of my parents had to come out of retirement and go to work so they could support and raise their daughter’s children after she got addicted to opioids. One of my good friend’s brothers was found dead in a hotel room with a needle in his arm. I could go on…I’m from one of those small towns in rural Pennsylvania that got slammed with the opioid epidemic. I’m not into torture, but I wouldn’t pass on the opportunity to waterboard The Sacklers and everyone at Purdue Pharma who knowingly lied to the public and killed people.

The opioid epidemic was the “top pandemic” if you will prior to COVID-19, then it got put on the backburner. While COVID is now the top pandemic we are slowly paying attention to the opioid epidemic again, namely because it’s gotten so much worse during COVID times and fentanyl is always in the news for killing people. Not only is fentanyl now the number 1 cause of death for 18-45 year olds, but it is being put in everything…even weed! I live in NYC where smoking weed is pretty well normalized. Lots of people smoke weed all the time now, and it’s terrifying to think that even that is being laced with fentanyl. I think we should make fentanyl testing strips available everywhere, essentially strips that can detect the presence of fentanyl in drugs. Hand them out at parties, drug stores, football games, book stores, put them in vending machines…everywhere. Unfortunately they are controversial due to a puritanical “war-on-drugs” philosophy that is both silly and ineffective.

There is no question that COVID made the opioid epidemic worse. That’s what happens when you ignore an epidemic for a pandemic. A few months ago, I interviewed Dr. John Kelly, an opioid addiction specialist at Harvard Medical School, on how the COVID pandemic changed then opioid epidemic. It’s a fascinating listen, because he gets into the how/why someone with addiction is wired to do worse during a pandemic and when he/she is most likely to relapse. You can listen to it here.

The latest statistical report released by the NCHS covers overdoses from 1999-2020. Some of the higlights include:

The rate of overdose deaths increased for ALL races from 2019-2020. American Indians and Alaskan Natives has the highest rate while Non-Hispanic Asians had the lowest.

Since 2016, the rate of overdose deaths specifically due to opioids are mostly due to synthetic opioids, like fentanyl. Between 2019-2020, the rate increased 56%.

In summary, those are some pretty alarming statistics. I realize we aren’t out of the woods yet when it comes to COVID-19, but we really need to focus on getting the drug overdose and opioid crisis under control, sooner than later. We will never be in a situation where there is 0 risk of COVID, meaning we can’t put all of our resources and attention towards it forever and let everything else go to Hell.

Thanks for reading! Also check out: