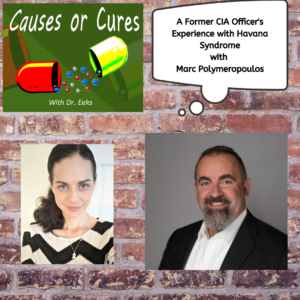 Episode 79 of my podcast is with a former CIA officer who has Havana Syndrome.

Havana Syndrome is a mysterious illness that was first identified in Havana, Cuba in 2016. A group of American diplomats heard a strange sound and then became very ill. Their symptoms included ringing in the ears, dizziness, nausea and vomiting and headaches. In 2017, the Department of State issued a travel warning for Americans traveling to Cuba, warning of the possibility of a mysterious illness affecting Americans.

There are several theories as to what is causing Havana Syndrome, but no definitive answers. Top theories include pulsed microwave beams, or basically attacks with non-ionizing radiation that can have biological effects at high enough doses. Non-ionizing radiation includes things like wifi, wireless headphones, microwave ovens and cell phones. While these seem to be safe at low doses, high doses or a long enough exposure may lead to health issues. Unlike ionizing radiation that can cause direct DNA damage, the theory is that non-ionizing radiation may create health effects by heating water molecules inside the body or possibly affecting the functioning of ion channels. Other theories include new kinds of espionage technology, some sort of mass psychogenic effect and neurotoxins. No one knows, and it’s clear that more research is needed. The US government is currently researching possible causes for Havana Syndrome and why it seems to target the intelligence community.

In episode of 79 of Causes or Cures,  former CIA officer Marc Polymeropolous discusses his experience with Havana Syndrome. He will describe in detail when he first experienced symptoms, how those symptoms progressed over time, what the CIA powers told him and did/didn’t do to help him, what he did for treatment and how he is feeling now. He will also discuss what he thinks happened to him.

Other interesting topics to check out while you’re here:

COVID-19 in deer: spillover from us humans