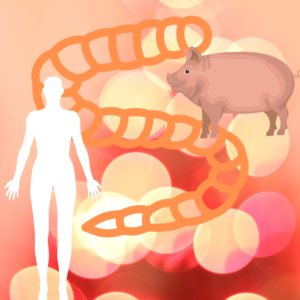 Tapeworm Eggs in the Brain:

The New England Journal of Medicine recently posted a case study about a 38 year old man who had tapeworm eggs in his brain. According to the report, the man was behaving normally until one early morning (4 AM) when he fell out of bed and began shaking on the floor. His wife reported that he was confused and began speaking gibberish. His wife called the police who took him to the emergency room, where he had a generalized tonic-clonic seizure.

Several of his family members told doctors that the man had no history of seizures or any underlying chronic conditions. He didn’t take any medications, didn’t smoke, use drugs and rarely drank alcohol. He worked as an environmental maintenance person and the only significant travel history was that he came to Boston from rural Guatemala 20 years ago.

What was causing the symptoms?

After conducting blood tests and imaging, it was determined that the man had cysticercosis. Cysticercosis is the most common cause of seizures in the world. First, a person ingests eggs from the tapeworm, in this case, Taenia solium. The eggs form cysts, which means that they may not generate symptoms for years. Over time, the body can form calcifications around the parasitic lesions. Cysticercosis is most common in Asia and Central America. In the US, it has a higher prevalance in New York City, Southern California and Texas. The CDC estimates less than 1000 cases of humans infected with tapeworm per year.

How does someone get tapeworm eggs in the brain, though?

There are different types of tapeworms, but Taenia solium is pork tapeworm. People get it by eating undercooked or raw pork. If a person ingests the eggs of the pork tapeworm, they can travel to the brain and lead to Cysticercosis. Tapeworm eggs are shed in the feces of people infected with tapeworm. If poor hygiene, poverty or poor resources are significant factors in an infected person’s environment, a person can spread the taepworm eggs to other people, leading to Cysticercosis. Any contact with poop that has tapeworm eggs can put a person at risk. For example, if someone touches a doorknob with infected poop and then puts his/her fingers in the mouth, he/she can get infected. If someone eats food contaminated with feces that contains tapeworm eggs, he/she will get infected. In the case of the Boston man, he was probably infected in Gutemala. Remember, symptoms of cysticercosis often do not appear for years.

How do you tapeworm eggs in the brain?

Each case is different, but it’s a combination of drugs including antiparasitic drugs, steroids and antiseizure medication.  After discharge, the man underwent repeat imaging of the brain to monitor his progress. Three years after his initial presentation, he no longer had seizures, although, according to the case study, he continues to take antiseizure medication.

While tapeworm eggs in the brain is an interesting case study, you probably don’t have to worry too much in the US. Interestingly enough, when I was a little girl, I used to bring in tapeworm for Show and Tell. My father was just starting out as a smalltown veterinarian, and I distinctly remember bringing in jars of dead dog tapeworm that he kept stored at the animal hospital. I have no idea why I did this or why I thought it would go over well with my 3rd grade peers. I’m sure I caused a few kids to vomit, and God forbid if the cafeteria was serving spaghetti for lunch on Show and Tell days. I didn’t like Show and Tell. I felt the poor kids had an unfair disadvantage, because our stuff wasn’t as good as the rich kids’. My mother hated it too. One time, when we had to talk about our summer vacations during Show and Tell, she made me hold up a sign that said, “Money’s tight. Didn’t go far.”  But back to worms…Ahem…my Show and Tell tapeworm was not Taenia solium. It was Dipylidium caninum, or dog tapeworm. Dogs get it when they eat fleas that contain the parasite.

A deadly illness from essential oils at Walmart

What’s in the COVID-19 vaccines?

4 Responses to “Tapeworm Eggs in the Brain”