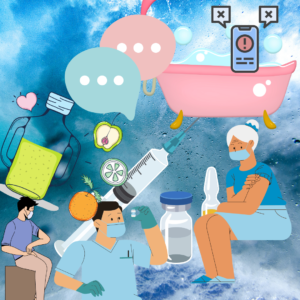 Detox the Vax Recipes are another toxic extention of the toxic communication that has been a hallmark of this pandemic.

There are several Detox the Vax Recipes floating around the ‘grams, meaning Instagram and Telegram. Though I haven’t found a scientific basis for any of them, I noticed that they get a lot of comments and reposts. One Detox the Vax recipe suggested taking a bath in Borax and bath salts to “remove heavy metals.”  I saw a post from a wellness coach based in California that provided a recipe to “remove heavy metals” from the “thing.”  It looked like a smoothie recipe. Lots of blueberries. From the comments, people appeared to believe it was valid. To all this I say: A bath in Borax would only work if the vaccine was made of ants. It’s not, so don’t bathe in borax. Smoothies are great, but they won’t remove vaccine ingredients from your body. Furthermore, the vaccines do not contain heavy metals. We know what is in the vaccines. I made a list of the vaccine ingredients here.

Listen, I feel badly for anyone who felt coerced into getting the vaccine. It’s obvious that Detox the Vax recipes exist for people who felt they had to take it to keep their jobs or attend schools. Since December and as part of the public health response to COVID, I’ve served as a facilitator for many conversations about the vaccine with a wide range of populations, including rural and farming communities, minority groups, church leaders, prisoners, teachers, public housing officials and young people. The goal was to hear and answer their concerns, and as facilitators, our job was to lead with empathy, honesty, respect and knowledge. Facilitating conversations this way has shown me how toxic and awful it is to discuss this stuff on social media platforms like Instagram and Twitter. Those platforms are great for shutting people down and making people feel stupid. They are awful for establishing meaningful connections and messaging that connects to and resonates with people. Some of the worst and most divisive health communication I’ve seen has come from established experts. You might know a lot, and that’s great, but that doesn’t mean you know how to communicate it to a larger population, especially to people who see the world differently than you. My experience in public health has taught me lots of things. One thing is this: Communication is 99% of the battle. If you can’t connect to people, the population for which a public health intervention is designed, your intervention will fail.

So the Detox the Vax recipes were most likely designed for people who took the vaccine to stay employed or needed it to participate in society or go to school. These recipes are an additional toxic extension of the fundamental problem: toxic and divisive communication. Being able to preach to your “own choir” but only knowing how to insult choirs that don’t think like you. Bullying and using force to create dead-end conversations instead of open ones where people feel safe to express their concerns. Leading with ego rather than empathy.

Communication takes work. It takes time, listening skills and research. I think we’ve largely failed in those areas throughout this pandemic. Of course, politicizing it from Day 1 as a battle between Democrats and Republicans set the stage for perpetual conflict. I also think that humans haven’t figured out productive, nontoxic ways to communicate with each other online, where the combination of anonymity, tribalism and the disinhibition effect rules discourse. One could argue that our toxic exchanges over public health are just an extension of our dwindling communication skills overall.

I am a firm believer that positive, honest, and empathic communication is the bedrock for a successful public health intervention. If an intervention needs to be tweaked, a most likely case in a pandemic with a new virus – a state swimming with uncertainties –  communication should be positive, honest and empathic. I keep repeating those words with the hope that they will one day sink in. We also need to get better about communicating uncertainties and avoiding the KIA (Know-It-All) temptation that captures many egos. To experts everywhere, being frank about uncertainty and the vastness of what we don’t know does not undermine your expertise. Messaging is both a science and an art. There is research on how to relay uncertainty to the public, how to help people navigate through a never-ending maze of scientific information, how to connect to people with different political leanings and cultural backgrounds, what is confusing and unnecessary messaging and what isn’t, how to figure out who your target audience is, the timing of messaging…and sometimes I wish folks would hold off on banging away at the keyboard before diving into this research. For example, instead of implying that someone is dumb and ordering him/her what to do, sit down with that person and go through a risks vs benefits analysis. In my experience as a facilitator, many people don’t know how to do a risks vs benefits analysis. Nor do they know how to assess risk size. Help people learn how to do that. Make it easier to understand. There are tools you can use to help them learn this skill. And guess what?  It’s a much more effective technique than an army of KIAs narcissistic tweeting.

The worst thing you can do is stand on a pedestal and spout insults. For example, calling everyone an Antivaxxer. That has to be one of the most destructive forms of health communications. Not only is there zero evidence that such communication helps boost vaccination rates, but common sense should tell you that calling people names doesn’t motivate them. It’s like saying, “Hey Asshole! Want to buy what I’m selling?”  And let’s face it, overuse of that term during this pandemic has made it lose its mojo. It now holds the same weight as a “Yo Mama” jab. Tons of people today, even seasoned scientists, virologists and vaccine makers, are getting labeled as Antivaxxers for merely expressing concerns.

Some cynical soul is reading this right now, rolling his/her eyes and saying “Yeah right. You’ll never get through to these people. They’re crazy.”  Okay, cool. And, you’re right in a way. You won’t be able to establish productive communication with many people. You won’t ever connect with some people no matter what you do. But you will have productive conversations with some. You will connect with some. Call it a bell-shaped blessing or curse, but consider it the reality of perfect being the enemy of good. It means you try, not not try.

2 Responses to “Detox The Vax Recipes? Another Toxic Extension…”