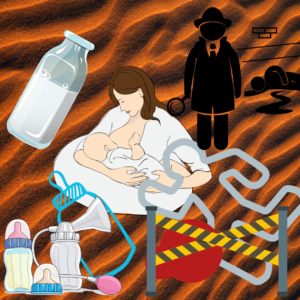 You wouldn’t think breast milk helped solve a murder, but it did in the case of  36 year old Christina Harris.

In 2014, Jason Harris, Christina Harris’ 48 year old husband, told police that he gave his wife a bowl of cereal one night. He mentioned that after she ate the cereal, she had difficulty holding a spoon and walking to bed. The next day he got up to go to work, with his 2 children, while Christina stayed in bed. He called a neighbor during the day and asked her to check on Christina. The neighbor wento Christina’s house and found her dead.

The medical examiner did an autopsy on Christina and listed her death as an accidental overdose, but this did not sit well with Christina’s family. They told investigators that she was not a drug user. At the time, Christina was breastfeeding her infant child and stored breast milk in the freezer. Investigators took samples of the breast milk to check for heroin or other illicit drugs. The results were negative.

The negative breast milk results set off an alarm with the investigators so they started to dig a little deeper into Jason Harris’ background. They learned that he had received over 100,000 dollars in life insurance benefits from Christina’s death, and his brother and sister told police that Jason had said that he wanted to get rid of his wife. Other witnesses testified that Jason was talking to multiple women, and a little over a week after his wife’s death, he went to visit one of the women in Rhode Island. Two weeks after Christina’s death, he moved a different woman into his home. In 2019, the medical examiner officially changed his conclusion from accidental overdose to murder.  In November of 2021, Jason Harris was found guilty of murdering his wife and poisoning her cereal with a lethal dose of heroin.

When heroin enters the body, it is metabolized to 6-monoacetylmorphine and morphine. All 3 substances contribute to heroin’s effect. It has a substantial presence in breast milk.

Christina’s case is the first time in the state of Michigan that breast milk was entered as evidence for helping to solve a murder. If heroin was found in her breast milk, it definitely would have looked more like an accidental overdose. Another clue however, and not mentioned in any of the articles I read, could have been the behavior of Christina’s infant. While I do not know the details of her child, a baby exposed to heroin via breast milk can be affected. When the baby stops getting the heroin-laced breast milk, the baby often shows symptoms of withdrawal. A baby dependent on heroin due to exposure via breast milk might present as sleepy or lethargic after feeding. In worst cases, the baby might develop respiratory failure and hypotonia, or loss of muscle tone. When in withdrawal, or if the heroin-laced breast milk is taken away, the baby might cry exceessively, be highly irrtable, have an irregular breathing pattern, experience abdominal cramping, sweat alot, yawn excessively or have diarrhea.

While breast milk helped solve a murder of a woman in the case above, it has been used to charge women with murdering their breastfeeding babies. Now, if you believe addiction is a disease like I do, it’s hard to understand the ethics of convicting addicted mothers with killing their children via breast milk. Yet it has happened. In 2012, Maggie Jean Wortman was sentenced to 6 years in prison for manslaughter when her infant son died after ingesting methamphetamine-laced breast milk. The manslaughter charge was a deal struck with prosecutors who wanted to pursue murder chargers. 30 year old Samantha Jones was charged with criminal homicide in Pa when her baby died from a combination of drugs in breast milk, including methadone and methamphetamines.  In 2020 in Indiana, Ashlee Rans was arrested after her 2 month old baby died from ingesting methamphetamine in breast milk.

What do you guys think about mothers who are addicted to drugs being charged with murder when their baby dies due to exposure via breast milk? It’s an interesting ethical question and I’d love to hear your thoughts.

Other stories from the blog:

Idaho man dies of rabies, first in state since 78

What’s in the COVID-19 vaccines?

Manic Kingdom: A True, Bizarre Story that will shock you