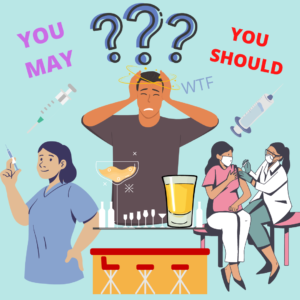 To hear the podcast version of this, please click here: Causes or Cures Boosters.

But my voice isn’t that great, so you know, maybe not.

The current administration announced in mid-August that boosters would be available to the public on September 20th, and that individuals should get a booster 8 months after vaccination. I was surprised by such a bold, public and specific announcement for several reasons. The FDA hadn’t yet evaluated the safety or effectiveness of Pfizer’s-BioNTech’s boosters. Moderna submitted data on boosters to the FDA in September, weeks after the administration’s announcement, and which still needs to be evaluated. Israel, a highly vaccinated nation that also leads the world in booster shots and is also currently experiencing another surge in cases while also considering a 4th dose…, was asked to present their booster data to the FDA on September 17th. While Israel’s vaccine passport might end up looking more like a Starbucks’ loyalty card, it’s worth noting that they are only using and collecting data on the Pfizer-BioNTech mRNA vaccine. Furthermore, no booster data has yet been submitted to the FDA for Johnson and Johnson’s COVID-19 vaccine, which feels like the forgotten vaccine, even though millions of Americans got it. When I think of the J&J vaccine, I think of 3.5 mm headphones in a world of new phones that use USB-Cs: It feels vintage. To appease the J&J recipients, there is talk of mixing and matching vaccines, which makes me think of socks more than science.

Given that the FDA hasn’t evaluated the evidence for boosters, and that the administration announced that boosters would be available for everyone in late September, is that policy informing science or is that science informing policy? If you are logical, the answer should be obvious, and that sequence of events is damaging to public health and undermines confidence in the vaccine.

As if that dubious bypass wasn’t enough, two FDA vaccine bigshots, Dr. Marion Gruber, director of the FDA’s Office of Vaccines Research, and Dr. Phillip Krause, deputy director, announced that they were leaving the FDA. Later reports indicated that their reasons for leaving were due to the administration’s handling of COVID-19 boosters. Just this week, both doctors, along with other scientists and researchers, published a letter in The Lancet making the case against COVID-19 boosters, a direct shot at the administration’s plan. So what’s in store for the American people? Well, several meetings for vaccine experts to duke it out, intellectually, and decide the fate of boosters. Once that happens, it will be the responsibility of scientific communication experts to boost the public’s trust in whatever is decided, with the help of free glazed donuts or not.

What makes the booster battle more significant is its timing with the administration’s announcement of sweeping COVID-19 vaccine mandates that affect millions of people. Many schools and universities are making the vaccine mandatory too, which leads to the question: How does the booster battle intersect with the mandates? Despite the high-level fight over boosters, will they ultimately fall under the mandates? There are legitimate reasons to have concerns. For example, in late June, the FDA added a warning to the Pfizer and Moderna vaccine provider and patient fact sheets about the risk of myocarditis and pericarditis. This risk of heart inflammation, which regulators state is rare, is higher in young men and male teens and higher after the second shot. Will that risk increase with booster shots? There is no good, long-term data to answer that question one way or another.

Then there is the question of ethics and vaccine equity. The WHO Director General Tedros Adhanom Ghebreyesus has stated that the benefit of boosters is inconclusive and essentially it’s immoral for rich countries to roll-out boosters when folks in poor countries haven’t even received one dose. His scolding of rich countries makes sense, not just from the perspective of vaccine equity, but also from how best to gain control of a global, airborne virus. There is a media-fueled trend to bash unvaccinated people for increasing breakthrough infections in vaccinated people, but to me, it makes much more scientific sense to blame the Delta variant, a variant for which the vaccine was not specifically designed to target. The Delta variant was not homegrown in a bleach-guzzling, unvaccinated ignoramus wearing a MAGA hat, as the media would like you to believe, but instead its origins are in India. The Lambda and the Mu variant, with Mu now documented in 49 states, both originated in South America. Unless rich countries plan on building a bubble that prevents people from coming in or going out, we won’t get ahead of the virus without helping the poor countries get ahead of it. And perhaps it’s finally time to consider that we will need more tools than vaccines to get us out of this mess.

No matter the decision on boosters, it’s important to ensure that policy doesn’t get ahead of science. If it does happen, it’s important to call it out. Don’t ignore it. People are watching. If you want them to trust you and listen to you, act like it.

Thanks for reading. See you soon- Eeks

3 Responses to “The Battle over COVID-19 Boosters Sure Doesn’t Boost the Public’s Trust!”