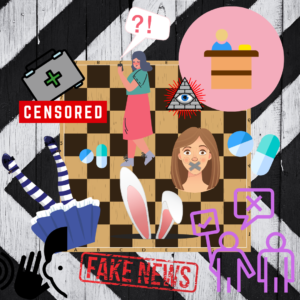 On The Battlefield of Misinformers, Dissenters & Staunch Stakeholders of the Almighty Narrative

Throughout the pandemic, I’ve worked as a public health analyst and have been part of several scientific communication initiatives dealing with how and what information is relayed to a particular audience. These include tasks like explaining how mRNA or viral vector-based vaccines work, using only plain language, and monitoring and dispelling myths about the vaccines. Right now, there is an aggressive campaign to purge misinformation from social media platforms. My main issue with this campaign is that, whatever the motive, scientific dissent is being incorrectly categorized as misinformation. Not surprisingly, a war over information has emerged on a digital battlefield crowded with Misinformers, Dissenters, Staunch Stakeholders of the Almighty Narrative and Confused-AF Spectators. This has allowed for keen observations related to strategy and tactics. Stay tuned for a self-published playbook on Amazon (that may even be available for purchase for a few days before being banned for violating something or other), but first I’d like to share some thoughts with you.

Scientific dissent is paramount, because it can help identify problems with a methodology, policy, drug, therapy, health program or even a widespread belief. I like to think of dissent as a Checks and Balances for science, ever important today when much of our medical system, regulatory bodies, health organizations and research agendas are under the spell of puissant pharmaceutical companies. They may not “love it when you call them Big Pharma” but big, they are.

Can you think of a time when scientific dissent was historically valuable? I mean, I hope so, as there are plenty of examples, one of which I’ll highlight: dissent concerning the relationship between the earth and the sun. Once upon a time, there was a man called Nicolaus Copernicus. He was an astronomer from Poland, and he was also a Dissenter. He published a book promoting a controversial theory about the earth revolving around the sun. At the time, everyone stood firmly behind the physics of Aristotle and believed the earth was the center of the universe, so they told Copernicus that his theory violated the science. If Copernicus had a Twitter or Facebook, he’d be branded a Misinformer and banned for spreading misinformation. You guys know who turned out to be right…, right? It’s not all the time, maybe not even half the time, that Dissenters prove correct, though it was the case with Copernicus.

Unfortunately, scientific dissent is not being recognized on social media platforms. It’s being misclassified as misinformation and banished. Now, I’m not a constitutional lawyer, but I believe private companies have the right to remove whatever content they want, and I’d only worry about a First Amendment violation if the government starts policing content for those companies. (Oh wait.) Either way, people deserve to know that these companies aren’t good at distinguishing misinformation from scientific dissent, and the baby will most likely get tossed with the bathwater.

In fairness, it can be extremely difficult to distinguish between misinformation and scientific dissent, which, given the importance of dissent, is an argument for doing away with censorship entirely. Others feel that misinformation can harm or even “kill” people, and therefore Misinformers, and the misinformation they spew, should be banned from every social media platform. But how is misinformation identified and how is its impact measured ? When it comes to identifying misinformation, it’s usually the job of “independent” fact checkers, sometimes journalists with no scientific background or journalists who consult with blue-check-mark scientists on Twitter who have similar biases and affiliations. And usually if information deviates from the almighty narrative, often dictated by a regulatory body, government or large health organization, it’s marked as misinformation. Scientific Dissenters are not invited to the fact-checking party, and why would they be? That would complicate the process, often create more questions than answers and sabotage the business plans of companies turning profits by posting the names of Misinformers as a righteous duty for all of humanity.

How is the impact of misinformation measured? I’m personally very interested in this topic. While “misinformation kills” has become a trendy tagline (Almost like “Just Say No”)  when it comes to health misinformation, what are the verified measurements people are using to measure its impact? Does reading something untrue online have a statistical significant impact in the real-world when it comes to health decisions or health behavior? When I  conducted a literature review on this topic, I discovered that the evidence base on this is not thick, which made me wonder if our policies are rooted more in evidence or intuition or hypotheses that sometimes don’t hold up after robust testing.  I promise I will expand on this topic in a future blog post.

Another question is what to do with anecdotes. An anecdote is a person’s experience, so it’s hard to call that misinformation or dissent. Still, many anecdotes are purged from social media sites under the umbrella of misinformation. I don’t support deleting personal experiences, because I fear it could push someone over the edge, and since I don’t really know the person’s mental state or level of brainpower, I don’t want to be the one to tell that person to shut up and quit sharing. There isn’t a “test” to join a social media site, and not everyone has the same intellectual power or is a master of online discourse. Furthermore, the heart of the internet is the democratic sharing of information. No level of censorship can stop people from interacting. If sites ban them, they’ll create new digital places to exchange ideas. It’s no mystery why sites like BitChute, Telegram, Newtube and Odysee, not to mention private newsletter subscriptions, are growing. The war on misinformation is like fighting guerilla fighters who don’t care about holding terrain, can set up camp anywhere, and make it very difficult for the other side to declare victory. Beating the censors comes down to utilizing the Fabian strategy, a strategy on steroids because of the nature of a  cyber battlefield.

No matter who gets classified as what, there are notable tactics and predictable responses on the battlefield of Misinformers, Dissenters and Staunch Stakeholders of the Almighty Narrative. Those who misinform, knowingly or not, latch on to Dissenters like parasites, so as to bolster their position and gain credibility. The Staunch Stakeholders of the Almighty Narrative love when this happens, because they use the Misinformers’ parasitic behavior to discredit the Dissenters. It’s the old guilt-by-association bit.

A dirty but highly effective tactic of the Staunch Stakeholders of the Almighty Narrative is to hit the Dissenters with reductive, stigmatizing labels. “Quack” is their favorite, and I’d argue excruciatingly overused. I recommend spicing it up a bit with alternatives like “Flimflammer” or William “Devil Bill” Rockefeller, not to be confused with the Rockefeller Center that just donated millions to fight misinformation, but the guy who was a famous Snake Oil Salesman. Other go-tos are “conspiracy theorist” or “anti-vaxxer” if you express an iota of concern about vaccines. Sometimes they disguise condescension as concern and ask questions like, “Is he/she okay?” or they treat Dissenters like radicals…, as if the Dissenter went from Gizmo to Stripe in a blink of an eye and can no longer be saved. Such pigeonholes can cost Dissenters their social media profiles, their reputations and even their jobs, and anyone considering dissention will observe this backlash and keep mum. Also, let me be clear about something: There are folks who could qualify as Quacks, but not everyone who gets called a Quack is a Quack. There are folks who could qualify as radicals, but not everyone who gets called a radical is a radical, and so on and so forth. The main thing the Dissenters should be wary of is to not become illogical or tribal due to the overwhelming bitterness and frustration that inevitably ensues. Meditation helps here, perhaps copious glasses of wine too.

What about the Confused-AF spectators? They simply observe the Cyber Charlie Foxtrot of Misinformers, Dissenters and Staunch Stakeholders of the Almighty Narrative and end up having no idea what or who to trust. Some might say their confusion is a reason to censor information, like forging a path through the forest for them so they don’t have to do it themselves. Others believe censorship will only fuel their distrust. For example, if you fear your significant other is cheating on you and want to know for sure, do you want to read all his/her text messages, or only the ones he/she shows you?

2 Responses to “On the Battlefield of Misinformers, Dissenters & Staunch Stakeholders of the Almighty Narrative”