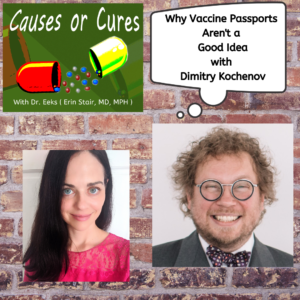 Vaccine passports are a bad idea.  I’ve thought a lot about this, read papers, heard people out and ultimately concluded that when it comes to vaccine passports, the negative outweighs the positive. I was going to do a long blog post on the subject, but then something better manifested: a podcast interview with Dr. Dimitry Kochenov who knows more about this topic than anyone I know.

What’s a vaccine passport? Basically it’s a document that will indicate your vaccination status and one that will be used to restrict and/or allow you to do certain things or gain entry to certain places based on your vaccination status. Many countries and states plan on using them, however there are states that have come out against them too, which has the potential to not only make international travel interesting, but domestic travel too. Some states, cities and elected officials are using vaccine passports but don’t want to call them that, because it sounds bad? Turns people off? Bad branding? Whatever the reason, Chicago comes to mind. They created a “Vax Pass” for folks to enter concerts and want to make sure no one calls it a vaccine passport. It’s totally a vaccine passport, and I’m not sure who they think they’re fooling. I suppose folks who see a duck, watch it walk and then call it a dog.

While the idea has merit, there are many ethical, legal and social concerns that make vaccine passports a bad idea, and I discuss them with Dimitry on my Causes or Cures podcast.

Dimitry Kochenov is known as “The Passport Professor” so he knows a lot about how documents are used to restrict people’s movement. This podcast will focus on the concerns around vaccine passports, including privacy issues and the threat of mission creep; the further stigmatization of marginalized communities; the creation of the “immunoprivilege class”; what we know and don’t know about the science of the vaccines and how that will impact vaccine passports; the potential for the politicalization of vaccines on a global level; who will enforce vaccine passports; and personal liberties vs government mandates. While a lot of people view vaccine passports as a way to get businesses up and running, Dimitry makes the case for how vaccine passports can actually really hurt small businesses.

He leads the Rule of Law research group at CEU Democracy Institute in Budapest and teaches Global Citizenship at CEU Legal Studies department in Vienna. He’s an author, having written the book Citizenship and several scholarly papers, and has been a researcher or professor at numerous universities, including Oxford, Princeton and NYU. He’s written or co-authored several papers on vaccine passports, including this one and his latest, The Commission against the Internal Market and EU Citizens Rights: Trying to Shoot down Sputnik with the ‘Digital Green Certificate.”

I hope you guys tune in, listen, share and subscribe. If you like Causes or Cures, please leave a rating too. And just so you know, I’m not paid to do my podcast. I have a day job and record the episodes when I’m not working. I started it, because I was frustrated with traditional media sources’ clear alignment with a political narrative, the influence Big Pharma and indusry has over media, and the censorship of doctors and researchers who question the status quo….a lot of that censorship coming from Big tech.  🙁  I can blab more about that, but for now, won’t you tune in and listen to why vaccine passports are a bad idea?

Why Vaccine Passports are a Bad Idea with Dr. Dimitry Kochenov: Listen Here.