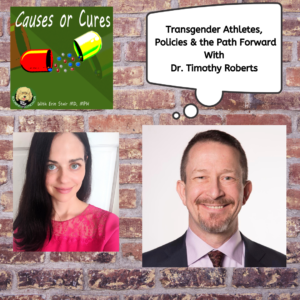 Transgender athletes and sports is a hotly debated topic in the news. I don’t know as much about this topic as some other topics I’ve written about, but I want to learn more. I want to understand the science better, and if/how the science can inform policy.

I’ve followed a recent story about biological female track athletes filing a lawsuit in CT, because transgender athletes were allowed to compete against them. While I didn’t read the specifics of the lawsuit, I believe it has to do with violating Title IX, the federal civil rights law that made it illegal to discrimate against one’s sex in schools that received federal money. People mostly talk about Title IX as it relates to females participating in sports. In fact, there’s even a popular athletic wear brand for women called Title IX.

Women’s sports need to be protected, because at one point, they weren’t. Only boys and men played sports, and women sat on the sidelines. There are so many benefits from women playing sports, at all ages, that go far beyond athletic ability and talent. Being a member of a team teaches you about responsibility, teamwork, discipline, sacrifice, leadership skills and more. It teaches you how to take criticism, mourn a loss and celebrate a victory. Participating in sports allows for folks to get exercise. While someone may not be a star athlete/player, even just participating in practice is valuable exercise. We are an unhealthy nation with an increasing obesity rate in both old and young populations. Playing sports can only help. Sports can help alleviate common mental issues, like depression and anxiety. There is also the prospect of sports scholarships that have allowed women to have opportunities they may never have had otherwise. I played on an all-girls travel soccer team from when I was 10 till I was 18. We were state champions for at least 3 of those years. I also played on numerous tournament teams. I was recruited to play soccer at several colleges, decided to go to West Point and play there. I went to West Point as a soccer recruit, and it was an opportunity of a lifetime, an opportunity I probably wouldn’t have had if I wasn’t a soccer player. I had other scholarship opportunities, which made it so, no matter where I went, my family didn’t have to worry about how to fund my college education. I didn’t grow up rich, so a scholarship was everything. I say that so people know how much I value women’s sports.

At the same time, transgender athletes should be able to participate in sports too. Each state has different policies to address transgender athletes and sports. Some allow them to participate without any restrictions, others mandate hormone treatment, and others say they must compete as their biological sex. Some people are proposing policies that ban them altogether, which doesn’t seem right nor fair to me. They are people too, and people who are often the targets of  hate crimes. I see a lot of  histrionic tweets alluding to the “end of women’s sports,” but that’s exaggeration for likes and retweets. It’s not like there is a locker room of transgender females waiting to replace all the biological females on the athletic field. Some other people say things like, “Just wait till they say they’re girls so they can win and get trophies!” Again, I think that’s a statement rooted in fear and not what’s happening in reality. I may be wrong, but it seems preposterous that a bunch of men would say they are women just to win a few sports trophies. Other people have told me that we shouldn’t divide the sexes at all and should allow everyone to compete as one sex. I don’t agree with that either, at least beyond the youth level, because there are basic biological differences between men and women that shouldn’t be ignored. For starters, men have more testosterone that women, which gives them an innate biological advantage. I acknowledge that “more testosterone” doesn’t mean that person will be a better athlete. There are other traits that go in to making an athlete. There’s training, too. But testosterone DOES make a difference. If it didn’t, things like doping would be legal.

I think that transgender athletes and sports becomes more of an issue at the elite level of sports. For example, the olympics, world cup or even some of the top Division I sports teams. But it may also be an issue at the high school and college level, especially if people are competing for scholarships or positions on professional teams. In those cases, what is the best policy? How can we allow for everyone to participate but ensure that it’s also fair?

To answer some of my questions and learn more about the science of transgender athletes and sports, Dr. Timothy Roberts joined me on a recent Causes or Cures podcast. He is an Associate Professor of Pediatrics at the University of Missouri-Kansas City School of Medicine and the director of Adolescent Medicine. He recently published a study on transgender athletes in the The British Journal of Sports Medicine that was widely cited in the media and on social media. Some popular tweeters were actually using his study to justify conclusions that he, himself, did not support. Ahem… humans.

Anyhow, I hope you listen to the podcast and if you do, I’d love to hear your views on transgender athletes and sports. I learned a lot by doing this podcast, and it even shifted the way I think about the topic. I plan on continuing to learn and always letting the science speak for itself.

To listen to my podcast with Dr. Roberts, please click here: Transgender Athletes and Sports

I have already received a few nasty messages about this podcast. Listen, I ignore nasty messages. If you want to have an intelligent conversation about this topic, I’m happy to, but if your motive is to tell me off or call me a name, save your finger movements. You are wasting your time and you’re not changing the way I think.

Other Causes or Cures podcasts to listen to:

PCOS: What does Science tell Us the Best Diet is

What are the health benefits of intermittent fasting? With Dr. Mark Mattson