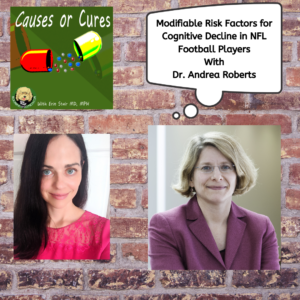 NFL Football Players and Cognitive Decline, on Causes or Cures.

Hi guys! It’s 2 weeks after the Super Bowl, and Tom Brady showed us, again, why he’s the greatest. I mean, geez! He’s killing it at 43, which is so inspiring. There are so many people who make age their dictator, that it’s refreshing to see someone prove that your biological age doesn’t have to match your number of revolutions around the sun. If you exercise, follow a strict, healthy diet, train right, do mindful meditation, marry a super model, go to bed at 8:30 PM every night, never eat Nachos…well, you can be Tom Brady too. Well, maybe not. But you can still live a healthier and more active life and not let age dictate you.

On to the topic of the day…NFL football players and cognitive decline. It’s no secret that NFL football players get hit in the head, a lot. It’s a rough sport. It’s also a well established fact that a history of head trauma or concussions is significantly linked to cognitive decline and/or dementia later in life. More awareness has been created about this issue in general, but specifically in retired NFL players. Harvard’s Football Players Health Study studies this issue and other health-related issues in retired NFL players.

While the link between head trauma and later-life cognitive decline is clear, are there any modifiable factors, or things a former player can do to lower his risk of cognitive decline? Dr. Andrea Roberts, one of the researchers involved with the Football Players Health Study, studied this in-depth and published several studies related to this issue. She joined me on Causes or Cures to talk about those risk factors and what football players can do to lower their risk.  She also discussed what positions are most at risk, what parents should do if they are worried about their kids being hurt and what more can be done to address this issue overall. I’ve recently run into more parents who don’t want their kids to play football, because they are worried about them getting hit in the head.

I learned alot in this episode, and I found it hopeful. Cognitive decline is horrible. It’s terrifying and sad, both for the person going through it and his/her family members watching it happen. It’s hopeful to hear about risk factors that are modifiable. It’s empowering: getting cognitive decline doesn’t have to be inevitable. There are things someone can do to help preven it.

You know, there are a lot more football players out there than Tom Brady. Often times we only hear about the stars, but there are tons of others who aren’t famous and still putting in the hard work and long hours. These guys entertain us for years. Kids idolize them. As fans, we shouldn’t just forget about them after they hang up their jersies. This is a public health issue that we should all care about.

Hope you consider subscribing, too!

Other interesting bits from the blog and podcast:

How to Prevent & Treat Gerd