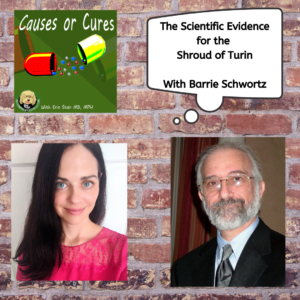 What is the scientific evidence for The Shroud of Turin, as it stands, in 2020?

To help me determine this, I’m excited to say that I interviewed Barrie Schwortz on a recent Causes or Cures podcast.  Who is Barrie?

Barrie was the Official Documenting Photographer for the Shroud of Turin Research Project (STURP), the team that conducted the first in-depth scientific examination of the Shroud in 1978. Today, he plays an influential role in Shroud research and education as the editor and founder of the internationally recognized Shroud of Turin Website, the oldest, largest and most extensive Shroud resource on the Internet, with more than fifteen million visitors from over 160 countries. In 2009 he founded the Shroud of Turin Education and Research Association, Inc. (STERA, Inc.), a non-profit  corporation, to which he donated the website and his extensive Shroud photographic collection, as well as many other important Shroud resources, in order to preserve and maintain these materials and make them available for future research and study. He currently serves as the President of STERA, Inc.

Before you listen to the podcast, I want to make a few points. I guess my first point should be defining what The Shroud of Turin is, because not everyone knows. The Shroud of Turin is a cloth that has an image of a man ( a negative image) that some people believe was the burial shroud of Jesus of Nazareth. Of course, others do not believe that. To this day, no one can explain how the image was created. A group of researchers attempted to date the Shroud using Carbon-14 Dating in 1988 and determined that it was from the Middle Ages. As Barrie will explain in the podcast, the result of that particular Carbon-14 Dating is strongly disputed, and for good reasons.

My second point: Barrie is Jewish. he is not Christian (not Catholic), so he doesn’t have a religious bias about The Shroud of Turin. In fact, he originally didn’t want the gig as Official Photographer, because he had no interest in religious matters. Fast forward to now, and he believes The Shroud is authentic, but he believes it is authentic for scientific reasons, not reasons rooted in faith or religion.

Third point: The scientific evidence for The Shroud of Turin was discovered or collected by scientists of all religious affiliations, including scientists who identify as Atheists. It’s important to internalize that, because tons of people immediately “turn off” exploring the evidence base for The Shroud because of its undeniable religious significance. One can explore the mystery of the Shroud by only focussing on the science. Trust me, even from that perspective it is a mind-boggling mystery.

Fourth point: The Shroud is not a painting. That has been proven. When I posted this on Facebook, a few people wrote things like, “It’s a fake! It’s a painting!” That is incorrect. We know it’s not a painting.

Okay…that’s it. I’ve received some harsh criticism on my Facebook page for merely posting this interview…which is…odd?  To me, the Shroud is fascinating because it’s a scientific mystery. No one has been able to explain how it happened, even after all these years. That’s pretty darn cool.

That said, take a listen to the podcast and decide for yourself: Is the scientific evidence for The Shroud of Turin strong? Or is it weak? What do YOU think it is? 😉

Click here to listen: The Shroud of Turin with Barrie Schwortz

Other podcast topics with featured experts:

The Truth about Alkaline Water

Ozone Therapy for the Coronavirus? HUH?

How Many Deaths did COVID-19 Cause? A Quick Lesson on Causation

2 Responses to “The Scientific Evidence for the Shroud of Turin: With Barrie Schwortz”