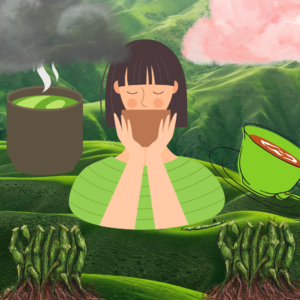 Is there an herbal remedy for anxiety?

Well, there might be several. Today I want to focus on KAVA, since you often see that marketed for anxiety and stress.

Kava Kava ( Piper methysticum) is a plant from the pepper family and native to the South Pacific where it is often used as a ceremonious and narcotic drink. Early Europeans used to call KAVA, “Intoxicating Pepper.” Specifically, Kava comes from the rhizome ( underground, horizontal stem part) of the plant. Its kavalactones are the active ingredients, or what cause a particular physiological effect.

Kava has been used for anxiety, particularly daytime anxiety. It doesn’t seem to affect one’s alertness, reaction time or make one sleepy if used at the recommended dose. It also helps relax one’s muscles, which may be helpful in cases where anxiety causes muscle tension and subsequent aches and pains.

There have been several safety concerns with Kava. It has been linked to severe hepatotoxic (liver) damage, and for that reason, Kava was withdrawn from the European and Canadian markets. While a causal link between Kava and liver damage hasn’t been definitively established, there are enough cases to support a cautious approach. A case study I read years ago comes to mind. It was published in the British Medical Journal and featured a 50 year old man who had a history of anxiety. To treat his anxiety, he took 3-4 capsules of  Kava per day, or 210-280 mg of Kava per day. He showed up at the hospital complaining of fatigue and yellow skin. The doctors ran tests, and his liver enzymes were sky high, meaning his liver wasn’t functioning properly. He had no other underlying health conditions and no history of drugs or alcohol use. His condition worsened rapidly. He developed encephalopathy ( damage to the brain), and though they tried a liver transplant, he ultimately died. They did an autopsy, and his liver was severely necrotic and full of inflammatory cells.

Some folks believe the liver toxicity related to Kava was due to using younger plants, unpeeled roots and alcohol-based solutions, as opposed to water-based ones. When people started to hear about the medicinal benfits of Kava, demand grew. To meet the demand, folks began shipping out younger plants, as opposed to the older plants that are often used in traditional South Pacific beverages. They stopped peeling the roots, which are shown to be high in alkaloids, Nitrogen-containing compounds that have profound physiological effects.

Heavy, long-term consumption of Kava can also cause a skin condition called Kava Dermopathy. It’ s a dry and scaly skin rash. You don’t often hear about this in the US, as it’s more likely to occur in areas of the world where Kava is a traditional beverage. That said, I knew someone who wanted to steer clear of prescribed medications for anxiety and took a very high dose of Kava. She developed a skin rash that, to me, looked an awful lot like Kava dermopathy. I know her doctors were stumped, because most don’t even ask about supplements nor make the connection. She stopped the Kava and the rash went away.

The take-home point is that, if you use Kava as an herbal remedy for anxiety,  you want Kava from older plants ( at least 5 years old), in an aqueous solution, at doses based on published studies.

Are there studies showing that Kava is an effective herbal remedy for anxiety?

A randomized, placebo-controlled, double-blind crossover trial involving 60 adults with generalized axiety showed that the group that took 250 mg of kavalactones/ day ( in an aqueous solution) scored significantly lower on the Hamilton Anxiety Scale and Beck Anxiety Inventory compared to the group that took placebo. Most importantly, there were no serious side effects. Another randomized controlled trial involving 70 people with diagnosed Generalized Anxiety Disorder showed that the group taking 120-240 mg of an aqueous Kava solution showed a significant reduction in anxiety symptoms compared to placebo.

If you suffer from anxiety disorder or just get anxious a lot, it might affect your ability to sleep. That’s very common. One randomized controlled trial showed that a Kava aqueous solution significantly improves sleep issues associated with anxiety when compared to a placebo.

Those were short-term studies. A recent, multi-centered, placebo-controlled, randomized controlled trial tested Kava as a long-term treatment for Generalized Anxiety Disorder. Kava did not produce a significant effect over the placebo, meaning it might be beneficial for short-term cases of anxiety ( or situational anxiety) but not for controlling diagnosed Generalized Anxiety Disorder in the long-term.

A woman wrote to my website and asked about using an aqueous preparation of Kava for menopause. Menopause can be a highly anxiety-provoking state. l mean, let’s face it. Menopause can be ruthless for some. I’m not there yet, but I know it’s not going to be a picnic. Anyhow, there is some evidence that Kava may help ease anxiety associated with menopause, particularly when used in combination with Hormone Replacement Therapy. At least one study showed that the addition of Kava made a significant difference. Another study showed that Kava extract helps reduce anxiety for perimenopausal women.

This is an area that needs a ton more research, but some folks who are discontinuing benzodiazepines, a task that can be very daunting and awful for some, sometimes taper with Kava. I am not recommending this, but it’s an area worth exploring since tapering off of psych meds can be very difficult.

Hope you guys found this helpful. If you try a Kava preparation or tea as an herbal remedy for anxiety, just be safe and smart about it. If you want to stay in touch, hit the home page and sign up for our newsletter. Stay tuned too!  I plan on writing a post about how I use our own ZENTones, therapeutic sound programs, for daytime, nightime and situational anxiety. Of course, with links to studies. I hope you guys check those out too. Anxiety and stress can be tough to manage. It’s good to have a wide variety of tools to choose from in your toolbox.

Don’t forget to check out some of the guests on my healthpodcast too: Causes or Cures!