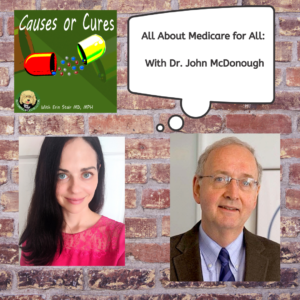 On one of my more recent Causes or Cures podcast episodes, Dr. John McDonough explains the metaphor of Medicare for All.

Medicare for All is a highly controversial and emotional topic. For some, it’s the most important voters’ issue. It’s also incredibly hard to define. For instance, does it equate to universal access to healthcare, like many other nations have in place, or is it something else? A lot of people don’t even know the details of Medicare, let alone Medicare for All. I was talking to an older woman the other day who has Medicare but also has additional health insurance to pay for things that Medicare doesn’t cover. It’s common for folks on Medicare  to have additional health insurance, because Medicare doesn’t cover everything. That, from the get-go, should tell us that Medicare for All isn’t Univeral Healthcare.  It IS a metaphor.

To me, healthcare is unaffordable in our country, and it’s a darn shame.  And, of course, there are “good” health insurance plans and some people “love” their health insurance, but, in general, I think the US does a piss-poor job of making quality healthcare affordable for everyone. I also think drug prices are ridiculous and only benefit the people at the top of drug companies. Frankly I’m tired of excuses like, “Well, they have to cost this much to ensure quality and continue innovation.” No, no they don’t. In fact, a drug company has a significantly larger budget for marketing than research and development. It’s also true that, since the Bayh-Dole Act, tax payers (you, me and Joe Schmoe) fund many of the new drug discoveries that then go on to be ridiculously priced. Think of that business model for a minute: We fund new drugs that the drug companies then mark up by ridiculous percentages. We don’t get a financial return on our investment. Instead, if we become sick one day and need the drug, we’ll have to find a way to afford them. Perhaps we can create a a Go Fund Me page or two, and if we are savvy at Social Media and tell a compelling enough story, we’ll get a few donations. We don’t make any money on our initial investment. The only ones who make money are the drug company CEOS and shareholders. We invest to get screwed! What an unbelievably sweet deal for Big Pharma, I mean, seriously.

A quick personal story before I continue my rant about drug prices and how it relates to the metaphor of Medicare for All, my dad, a veterinarian, recently rescued a stray kitten. It was a really cute kitten. He and my mom fed the kitten, cuddled with it, had their hands in its mouth. One morning, the kitten became suddenly and severly ill. It wasn’t aggressive, but seemed dopey and fatigued. A few hours later, it died. My parents were shocked at the rapid decline and decided to to test the kitten for Rabies. The test came back positive, so they immediately started the Rabiest post-exposure protocol. Once complete, their bill came and it was over 100, 000 dollars. Thankfully, my dad was covered, but I wondered why or how the treatment could cost so much, especially since Rabies is a public health concern. The last thing you’d want is someone getting exposed to Rabies and then avoiding treatment because of the cost. Rabies is fatal almost all of the time, without the vaccine and post-exposure protocol. Anyhow, I stumbled across a Web MD article and saw that the cost of the Rabies treatment rose 370% between 2007 and 2017! I couldn’t believe that. And, as one would assume, people who were bitten and concerned about Rabies hesitated to get treatment because of the cost. A person in the article describes being told by her health insurance company that they wouldn’t cover the cost unless the animal in question came back with a positive test. Folks, that shouldn’t happen in the US. That is insane.

When it comes to Medicare for All, the enormous elephant in the room ( oh look, a metaphor!) is who will pay for it. And how much will it cost. And like Dr. Mcdonough discusses in the podcast, this really comes down to our values and our inability to do anything about drug companies setting their prices. There are also questions about access to care and the quality of care. I’m a West Point graduate and former Army officer and if I had a dime for everytime I hear a veteran complain about the VA, I’d be rolling. Would a practical manifestation of Medicare for All be better or worse than the VA?

Dr. Mcdonough discusses these topics and more in the podcast. He teaches at Harvard, I’m in NYC, and we connected via Skype. I’m happy to report that the sound was pretty good on this one.  😉  Also, I am not a healthcare policy expert, so I learned a lot during this podcast too. I did a lot of listening..and wow: It’s complicated. If someone tells you it’s easy, he or she is misinformed. And if there was a policy to go along with the “Devil is in the details” cliche, Medicare for All  is it.  That said, I hope you guys listen to it and feel free to tell me what you think. You can message me on social media ( Instagram or Facebook or Twitter) or just leave a comment here. I see all the comments and enjoy your feedback.

Just to give you an idea who Dr. McDonough is, here is his bio:

Dr. McDonough is a professor of practice at the Harvard TH Chan School of Public Health in the Department of Health Policy & Management and Director of the HSPH Center for Executive & Continuing Professional Education. Between 2008 and 2010, he served as a Senior Advisor on National Health Reform to the U.S. Senate Committee on Health, Education, Labor and Pensions where he worked on the writing and passage of the Affordable Care Act. Between 2003 and 2008, he was Executive Director of Healthcare For All, a Massachusetts consumer health advocacy organization, where he played a leading role in the passage of the 2006 Massachusetts Health Reform Law.  From 1998 through 2003, he was an associate professor at the Heller School at Brandeis University.  From 1985 to 1997, he was a member of the Massachusetts House of Representatives where he co-chaired the Joint Committee on Health Care.  His articles have appeared in the New England Journal of Medicine, Health Affairs and other journals.  He has written: Inside National Health Reform in 2011 and Experiencing Politics: A Legislator’s Stories of Government and Health Care in 2000, both by the University of California Press and the Milbank Fund, and Interests, Ideas, and Deregulation: The Fate of Hospital Rate Setting in1998 by the University of Michigan Press. He holds a doctorate in public health from the University of Michigan and a master’s in public administration from the Kennedy School of Government at Harvard.

Other podcasts to listen to:

Obesity and COVID-19: HOW obesity makes everything worse

Wellness IS a Luxury Brand– bring your senses of humor and sarcasm for this one!