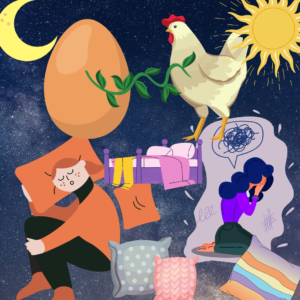 Sleep for depression and dietary interventions might be the best first approach for cases of depression. Particularly mild depression. Sleep and depression, much like the link between sleep with other chronic illnesses, has a Chicken-and-Egg relationship. I’m going to explain below, but thought I’d post one of my favorite Chicken and Egg jokes first:

A man runs to the doctor and says, “Doctor, I need help. My wife thinks she’s a chicken!”

Doctor: “How long has this been going on?”

“Why has it taken you so long to come and see me?” asks the doctor.

The man shrugs and says, “We needed the eggs.”

AHEM…anyhow…on to sleep for depression:

Bad sleep is bad for everything. Depression is also bad for everything. Interestingly enough, studies suggest that if you treat sleep problems (without even touching the depression symptoms), one’s depression can significantly improve. When I was the chief of clinical research for a UK-based digital mental health company that offered digital programs for insomnia, depression, anxiety and substance abuse, I was constantly evaluating new studies, to give me ideas on how we could leverage our programs. When I came across studies suggesting that sleep therapy for depression was highly effective, I was excited for a couple of reasons. One, I suffered from depression and often thought ( and was told by professionals) that bad sleep was just a symptom of depression. But what if it was really the other way around? There’s no way to prove that it isn’t. Also, if sleep therapy improved someone’s depression, maybe he or she wouldn’t have to take medication. Medication always has side-effects, and we now know that the common antidepressants also come with significant withdrawal issues when a patient tries to stop. If you’re interested in that topic, listen to my podcast with Dr. Michael Hengartner. He is a researcher in Switzerland who has studied both the effectiveness and withdrawal symptoms related to antidepressants. It’s one of my more popular podcasts, and folks who have listened to it, write me and say things like, “Oh wow! I was on an SSRI, tried to stop, experienced brain zaps, insomnia…and thought my depression was coming back!” In many cases, it might have been withdrawal, and unfortunately, antidepressant withdrawal is not widely known or understood.

The relationship between depression and bad sleep has always had a chicken-egg feel to it, as does the relationship between depression and diet and depression and life circumstances. In other words, which comes first? While most patients with both insomnia and depressive symptoms are often treated only for depression, recent studies suggest that they should be treated with CBT for insomnia as well.  Insomnia has been directly linked to increased irritability, volatility, poor memory, increased emotional disturbances and an inability to regulate one’s emotions. A lot of those symptoms are seen with “depression” as well.

It is also possible that by treating a person’s insomnia, his or her depressive symptoms will  improve, whether the treatment is provided in-person or through a computerized program. How cool and convenient is that?!? You wouldn’t have to leave your home to see a therapist. If it works for someone, it could lead to not only mental and physical benefits, but also more energy to try new things, new relationships, or move forward with tasks they’ve been putting off due to fatigue (even as something as simple as cleaning the house, going to the dentist for a teeth cleaning or getting those straight teeth you always wanted). That might sound silly, but we all put off doing stuff when we are tired!

An interesting study in Sleep compared the effectiveness of a computerized program for insomnia and one for depression in adults with both insomnia and depression. Results showed that the program for insomnia produced significantly better results for insomnia severity than the program for depression, and both programs produced SIMILAR improvements for depression severity. While the focus here is depression, insomnia has been linked to many chronic diseases. As online mental health care evolves and becomes more sophisticated, the possibility of successfully treating one’s insomnia issues at home may significantly improve their overall health and lessen their risk of long-term illnesses. There are a lot of digital programs available for insomnia in the App stores. Be careful. You want a program that has been tested and works. Look for randomized controlled trials ( the gold standard of evidence) and look for who wrote the programs. Apps are like supplements: Not well-regulated, so a lot like the Wild West.

If you are struggling with depression and haven’t given sleep therapy a go, maybe consider it. It can’t hurt. There are therapists who specialize in cognitive behavior for insomnia, so I would start there first. If you prefer the digital route, just make sure you use a reputable program. On a personal note, if you are interested in MY sleep routine, I share it here.  What I do may not work for everyone, but you’ll at least get an idea of how seriously I take my sleep ritual. I also have a rule: I don’t make ANY big decisions when I don’t sleep well the night before. Doing so has created me a world of hurt in the past.

That’s all for today, guys! Feel free to say Hi on Instagram, or in the comments section below…though they take me much longer to respond to.

If you’d like to try our sound therapy programs for sleep, rooted in binaural beast and sequencing, click here.