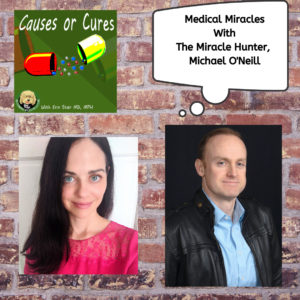 Do medical miracles give you hope or do you think they are all hoaxes? Or perhaps explained by a scientific process we just don’t understand yet?

I, probably like a lot of you, have prayed for a medical miracle. When I was little, and my hemophiliac dog Curly was on his death bed, his breathing becoming more erratic with each passing second, I prayed to God for a medical miracle. “Please, God, heal him.” And my request was usually followed up by a promise to behave better or do something noble in the world. The miracle never happened, and Curly died.

I’ve never witnessed any medical miracles, but I have heard of mysterious cases of healing that doctors can’t explain. And believe me, doctors ALWAYS try to explain something. As you may or may not have read in my parody, Yours in Wellness,  doctors are a group of people who don’t like to say, “I don’t know.” I’ve also heard strange stories about people on their death beds or folks who have near-death experiences. One nurse told me the case of a man who was brought in after a horrific car accident. It was the night shift, and she was on duty in the ER that night. He was unconscious, badly injured with broken bones, and in a coma for several days. Eventually he came out of it and went home, no doubt after a lengthy recovery process. About two months later, the man came back to the ER, but for something much less benign than the car accident. The same nurse was working. He came up to her and thanked her. She was surprised, because he was unconscious. He told her that he “saw her put a blanket over his body” and wanted to thank her for her kindness. She’s never figured it out and neither did the patient. But, there are more of those stories everywhere. Medical miracles or not.

Growing up Catholic,  we learn about the most famous apparitions of the Virgin Mary. I’ve never seen a Mary apparition myself, but when I lived in Astoria, I went to a Greek Church to see a religious statue that supposedly wept. It was in a protective glass case, on a tiny pedestal, surrounded by coins and watches that people donated out of respect. A priest in a long black cloak stood behind me as I strained my eyes to get a glimpse of the miracle. After a good five minutes of trying to be impressed, nothing happened. It’s safe to say, I did not leave my watch behind.

But there ARE cases of healing that remained unexplained, and who am I to say if they are medical miracles or acts that are current level of scientific knowledge cannot explain. Maybe science will explain some of them, or many of them, in the future. Still, there are several cases that have undergone rigorous scrutiny by groups of scientists, even atheist scientists, that have defied logical explanations. Those “miracles” are the ones I’m most interested in.

On my latest Causes or Cures podcast, I chat with Michael O’Neill who is THE Miracle Hunter. Seriously, he hunts miracles full time and is considered an expert. He talks about how he got interested in medical miracles and became the Miracle Hunter. Then he talks about medical miracles, along with Apparitions, the Stigmata and the Incorruptibles, how they are investigated and how science plays into the whole process. He also discusses what he says to Cynics. Of course, I sidetracked away from medical miracles for a bit and asked him a few odd ball questions about Exorcisms, and what he said in response to that was a bit frightening! Anyhow, I hope you guys listen to the podcast and I hope you share and subscribe and write me and tell me your feedback. I love hearing from you guys, and though I love doing it,  I want to make sure the podcast is interesting and helpful to YOU.

Other podcasts with expert guests that might strike your fancy:

Everything about Mass Shootings