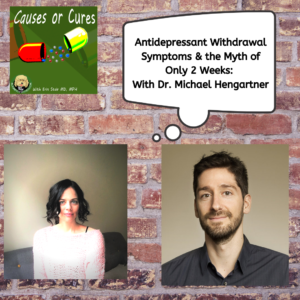 What’s the scoop on antidepressant withdrawal?  A hotly contentious scoop, that’s what.

Those of you who’ve read my fictionalized memoir Manic Kingdom know that I have a vested interest in this topic for personal reasons. If you read Manic Kingdom, you’ll know that the main character Becka ( based off of me in medical school)  was given an antidepressant. That happened to me when I was in medical school, struggling with bulimia, depression, insomnia and how to manage a roommate with schizophrenia. A doctor prescribed me one and I took it dutifully, without reading any pamphlets or being instructed on potential side effects or dependency issues down the road. I took the pills without questioning anything, because I, like most patients, wanted to feel better fast and trusted the experts in the white coats. Soon after, I had one hell of a wild, manic adventure that no one could have ever predicted. It’s that crazy, and if you read Manic Kingdom, you’ll agree with me.

Did the antidepressants cause or fuel some of the mania? I can’t say. There was a lot wrong with me and my surroundings at the time, and I don’t want to be a victim of “recall bias,” where a person finds and blames a negative experience/exposure for an event in the past. That’s why the drug is barely mentioned in Manic Kingdom. I don’t play the “blame game” because I wanted the reader to experience the manic adventure with me, as I did, and questioning my prescribed medication was not part of it.  I didn’t stay on the pills long. I stopped them after only a couple of months, so I never experienced withdrawal. I’m grateful, because the more folks I talk to who are experiencing antidepressant withdrawal describe it as utter Hell. Many are being ignored by their doctors, and conventionally-trained doctors often don’t know how to address the symptoms. Many doctors will diminish antidepressant withdrawal, as if it’s not really a thing, which enrages those who are experiencing it and looking for answers. It’s a big problem that has escalated into a war.  At least a war in the digital sense.

Today’s guest on Causes Or Cures is Dr. Michael Hengartner, a highly published senior researcher and lecturer at Zurich University of Applied Sciences whose area of expertise includes psychiatric epidemiology, public mental health, psychosomatics, health services research, social psychiatry and psychopathology. In this episode, he presents evidence that challenges the notion that antidepressant withdrawal lasts, on average, only two weeks and also presents evidence that challenges the notion that antidepressants are effective drugs for clinical depression.

To listen via the web, use this link: Causes Or Cures: Michael Hengartner on Antidepressants

To listen to this episode on I-tunes:  Causes Or Cures

To listen on episode on Google Play:  Causes Or Cures

I’m a Cardiologist: My Experience on Benzos