Nothing has brought the United States to its knees faster than a microscopic strand of genetic material that had its start in a small town in China and has since captured the world. A serial attacker that indiscriminately invades bodies, kills people, holds people hostage in their homes, shuts down cities, destroys world markets, overwhelms health systems, ruins small businesses and tests the world’s experts and leaders like they were never tested before; all that, and it’s a thousand times smaller than one bacterium on your cell phone.

I’m typing this from my apartment in New York City. It’s Monday, late afternoon. Pasta is boiling on the stove, onions and garlic are chopped on the counter, and my laundry is tumbling in the dryer down the hall. Schools were ordered closed and the mayor and governor just ordered all gyms, bars and restaurants closed by 8PM tonight. There’s a new, eerie feeling in the air as the city that doesn’t sleep is abruptly ordered to become the city that sleeps. Shut down. Social distancing is the name of the game.

I’m a natural at keeping my distance from crowds. On a normal, non-pandemic day, I shun crowds like people shun the Coronavirus. I think it’s because I’m really awkward at small talk, and I feel claustrophobic. I have no doubts that if I had a therapist, he or she would tell me to go out more. Get out there and socialize, Erin. But, nope. Instead I’ll stay home and sketch Anhedonia with colored pencils. I’d put the smart money on me having the same Myers-Briggs as Emily Dickinson, though she’s a much better poet than I’ll ever be.

Though I have no issues entertaining myself when naturally social distancing throughout the year, now that it’s a government-ordered trend, I’ve decided to try new things. Nothing as cool as Arnold Schwarzenegger’s video of him feeding his pet ponies in his really nice kitchen, but just little things to feel part of the trend. For example, last night I was all set to make gluten-free, hemp-seed, strawberry pancakes- the coconut oil was in the frying pan and everything- but instead, I made an abrupt switch and used the pancake mix to make cupcakes. Rather large cupcakes–an unplanned largeness that revealed itself at the 15-minute mark in the oven. They were really good, surprisingly good. I’m always surprised when something I bake or cook is good. I also set a knife on fire while social distancing. My nose felt congested and my throat felt dry, and since any symptom during a pandemic makes you think you have THE virus, I decided to make a homemade humidifier from a pot of boiling water, Eucalyptus oil and Tea Tree Oil. While the pot was boiling, I watched what was maybe my fourth press conference of the day. In the throes of COVID-19, press conferences are pure adrenaline rushes. A higher death rate; something new closes; an emergency room doctor gets put on a ventilator; a new case pops up in a new town; a new law is passed to prevent price gougers from selling toilet paper for 500$. The adrenaline is because the virus moves at an exponential rate and we’re always lagging behind it, trying to catch up. So while I was mesmerized by the latest press conference, I smelled something burning and saw flames coming from a place on my stove where flames shouldn’t come from. A knife I left drying on the stove was suddenly on fire. Luckily, I threw it in the sink, turned on the cold water and put out the flames. Phew. Then I chuckled, because I felt the irony of my imaginary obituary: Woman goes up in flames while social distancing from COVID-19 after a knife she didn’t see catches fire on her stove while attempting to boil a pot of water with essential oils to make a homemade humidifier to help alleviate symptoms that she thought were from the deadly virus. 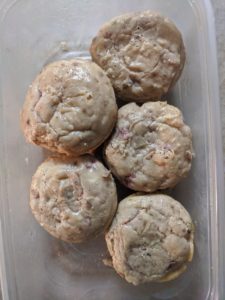 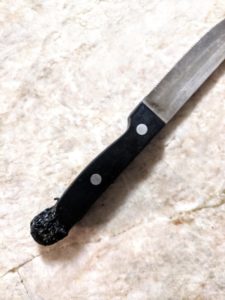 Yesterday afternoon, I listened to my friend, actor and editor Gabriel Nathan, read Rudyard Kipling’s The Elephant’s Child on Facebook Live. He’s using his social distancing time to read short stories. How good does it feel to be read to? Read to by an entertainer who can pronounce all of the words?  I loved it and hope he starts reading short stories even when a deadly pandemic doesn’t have us imprisoned. I think we need it. Then last night, I watched John Mayer’s Live Instagram show, Current Mood, which I believe he started to help people feel less anxious on Sunday nights, a documented time for high anxiety as folks dwell on the work week ahead. Of course, anxiety levels are higher with a deadly virus on our minds. The theme of the show was social distancing, and even though he’s a celebrity and celebrities often feel not relatable, he made you feel like we were all in this together- sunk in bean bags wearing cheap pajamas and tacky socks, with a half-empty bag of Nachos and jar of salsa on the floor.

I’ve also taken social distancing to the streets. New York City is congested with humans, so you can never really be 100% isolated once you leave your apartment and head to the streets. I haven’t been leaving my apartment much, because I’m doing my part for the greater good. The greater good is slowing down the virus, so we don’t end up overwhelming our health system and, to put it bluntly, killing more people. In addition to what the experts have been preaching night and day, I know from my knowledge as an MD/MPH and work I’ve done at an organization whose sole purpose is predicting emerging infectious diseases, that social distancing works, but only when mostly everyone does it. We are hosts for the virus. The virus needs us to survive AND thrive. It takes over our cellular machinery and makes us its bitches. Once we minimize the number of available hosts, the virus will slowly, but surely, die down. The only way to do that is through social distancing. I know folks have been driving home this point, but that goes for the young, healthy, old, and folks with preexisting conditions. In fact, younger & healthier people can be the worst offenders when it comes to spreading the virus, because they are more mobile and always on-the-go.

How am I practicing social distancing on the street? For one, I’m not socializing with anyone for a long period of time. But if I chat with anyone, I’m at least 6 feet away. The one issue I’ve run into is my dog, Barnaby. Pandemic or not, I have to walk him. The problem is that he happens to be the friendliest dog in New York City. I wish that was an exaggeration, but it’s not. If the dog ran for mayor, he’d win. He insists on saying hello to everyone and making each person feel like the most important soul on the planet…, worthy of all his love for the next 20 seconds. Then it’s on to the next person. His friendliness has made social distancing on the streets challenging. To address this, I started wearing a surgical mask. I realize that a lot of people are wearing various types of masks-ones with filters, surgical, and I’ve even seen a lot of homemade masks. Yesterday, I saw a guy with a piece of plaid fabric over his mouth and nose, held in place with a pink ribbon that was tied in a bow. He looked like a terrified Christmas present. The thing with masks is this: they make people uneasy. Even when they’re expected, like during a pandemic, they still make people anxious and uncomfortable. Two days ago there were two women wearing masks at the post office. Another woman in a wheel chair came in, took one look at them, turned to me and said, “Do you know why they’re wearing those? They must be sick. Only sick people wear masks, so I guess they’re sick.” I just nodded in agreement, because… what the Hell us would I do? Anyhow, I started to wear a surgical mask when I walk my dog to “encourage” people to stay away from both of us. I’m worried about people petting Barnaby and transmitting the virus to his fur, thereby making him a fomite, or an object that can transmit a virus. It’s definitely possible and since he’s impossible to bath in my apartment without a dramatic scene and destroying half the furniture before landing in the tub, the mask is my one great hope. So far, I have good news to report: It’s working. The mask is keeping people away.

Most people. There was a man, a pale red-head, who had a camera in his hands and asked to take a photo of Barnaby. This happens a lot to me. Barnaby is like a celebrity, and me, his other half on the other end of the leash, is the unpopular Siamese Twin.  I agreed and the man snapped away, failing to get Barnaby to look at the camera for 99% of the shots. (It’s tricky.) Then he asked me if I wanted the photo, and I asked to see it first…of course from 6 feet away, because social distancing. He turned his camera around to show me and since I don’t have Inspector Gadget’s neck, I only saw a peach splotch. Then he started talking…about how he couldn’t handle social distancing anymore and needed to get out of his apartment to take photos. He said he was shooting on the Upper East Side- the back of a woman who was carrying a dog on her right shoulder- and the woman became angry with him and told him that he did not have her permission to take her photo. He argued that he wasn’t shooting her face, and was just trying to capture the dog looking over her shoulder. So I said maybe she was just stressed from all the Coronavirus drama. I ended up giving the man my number so he could text me the picture of Barnaby, which is posted below. I texted him “thank you” after he sent the photo, but he didn’t respond. Digital social distancing. Of course, that’s normal these days.  I’m pretty sure we’re dating now. 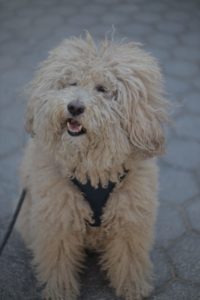 Take care of yourselves and your fellow brothers and sisters. That’s the whole point of social distancing. And don’t forget that social distancing doesn’t mean that you have to stay locked in your house or apartment 24/7. That’s a sure formula for turning into Jack Nicholson in The Shining. Classic movie, but you don’t want that. I mean, you might, but that’s between you and your DIGITAL therapist… (Social Distancing).  Go for walks, talk to people on the phone…and especially reach out if you start to feel lonely, depressed or anxious. Thoughts can be more dangerous than a deadly virus when you’re alone too long.

Before I sign off,  it’s time for some shameless self promotion: I hope you guys check out my new book- Yours in Wellness, Krystal Heeling. It’s a comedy- as much a parody on the wellness industry as on Big Pharma- so hope you read it. I also illustrated it. With colored pencils. If you’re feeling bored during your social distancing time, why not read it?  It’s short though, so you should probably buy a few more books along with it to kill the time. Or better yet, coloring books. Wellness guru Krystal Heeling is a huge fan of color therapy.

Podcasts to check out during this time:

Polygamy: The Good, The Bad, The Ugly