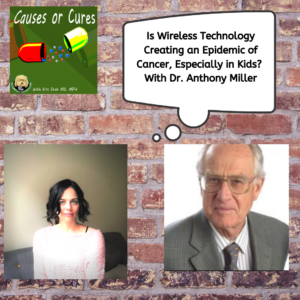 Just posted: A new Causes or Cures podcast episode on cell phones, wireless technology and cancer risk- Is there a link? Does anyone say there is a link?

Who is telling us to be careful? Are they all quacks? Far from. Despite what tech/phone companies tell us (and the scientists they hire) and despite our heavy reliance on cell phones and wireless tech, there are many highly credentialed people who feel they aren’t entirely safe and that we should be taking precautionary measures to mitigate risk. This doesn’t mean ditch your tech. That would be insane and you wouldn’t be able to function in the modern world. But could it mean reducing your exposure? Maybe. Right now, we are swimming in tech. Sleep used to be a tech-free place, but now we even have sleep tech that measures our vital signs, etc, why we sleep and can supposedly tell us how to sleep better.

While there has been no scientific majority or regulatory body to make a move or even suggest to minimize exposure, there are some incredibly bright, highly-published doctors and researchers who are sounding the warning bells. Sadly, I had to dig to find them. The mainstream media simply isn’t covering this topic enough, however they might after the World Health Organization takes a closer look at the current risk classification” for cell phones/ wireless tech as a potential carcinogen. (Dr. Miller expands more on that in the podcast.) In the meantime, I’ll do my best to find these doctors and researchers and get them on my podcast. In a previous Causes or Cures episode, I interviewed Dr. Fiorella Belpoggi about the risk of cancer and wireless technology. She is a doctor and researcher in Italy who ran one of the largest animal studies to date on this topic. You can listen to that episode here. Keep in mind that what happens in animals does not necessarily translate into issue with humans. But we can’t do a randomized controlled trial on humans regarding this exposure, because that would be considered unethical.

In this episode, I interviewed renowned cancer epidemiologist, Dr. Anthony Miller, on why he believes our widespread use of cell phones, wireless headphones and exposure to wireless technology are fueling a future cancer epidemic, especially in young people. He talks about the data, mechanisms of action, why folks don’t seem to take this threat seriously and why technology companies don’t feel the need to mitigate risk.

Dr. Miller is a trained medical doctor and Professor Emeritus at the University of Toronto’s Dall Lana School of Public Health. He is a longtime advisor to the World Health Organization and was the Senior Epidemiologist for the International Agency for Research on Cancer. He also served as the Head of Epidemiology at the German Cancer Research Center and as a consultant to the Division of Cancer Prevention of the U.S. National Cancer Institute. He’s published numerous studies on the epidemiology of breast cancer; cancer evaluation and screening tools; environmental causes of cancer,  and cancer control measures. Dr. Miller has served as the director of the epidemiology unit for the National Cancer Institute of Canada, a clinical professor for the Department of Clinical Epidemiology and Biostatistics at McMaster University, and was the Chairman for the Department of Preventive Medicine and Biostatistics at the University of Toronto.

It was great to interview Dr. Miller about cell phones, wireless technology and cancer risk. Please take a listen to what he has to say here. I think it’s worth it. Plus, there are really simple things we can do to mitigate our risk if any such risk exists.

You can also find it on i-tunes and subscribe here.

Causes or Cures Podcast Interview with Dr. Nicole LePera on what it actually means to be “holistic”

Grab a copy of Manic Kingdom, an absolutely bizarre, but true, story.