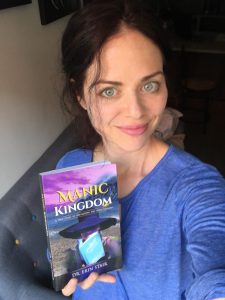 Wow, never thought that would happen!

I was thrilled to be featured on Dan Chisholm’s late night radio show on the BBC.  I’m posting a link to the interview below, though I’m not sure the link will be active forever. I believe it starts at the 32 minute mark. ( That’s what my friends tell me.)

Here’s the link to the BBC interview.

Why was Manic Kingdom on The BBC Radio Show?

Manic Kingdom was on The BBC Radio Show, because the host stumbled across a short story I wrote about watching someone die for the firs time. He really liked it, found me on Twitter, saw I wrote a book and read it. He really liked the book too, contacted me and asked me to come on his show to talk about it.

What is Manic Kingdom about?

Well, it’s a somewhat fictionalized memoir that features three main characters: Becka ( based on me when I was a medical student); Chase ( her roommate) and King ( a mysterious, incredibly athletic man who Becka, when on an abrupt hiatus from medical school, meets on a beach and eventually they has a bizarre romantic relationship) According to Kirkus Reviews, it’s a very eccentric read. I would agree with Kirkus. Most people who’ve read it have told me that it’s a fast read. Some people are deeply, deeply disturbed by the book and others find it refreshing. I’ve definitely lost friends and business opportunities because of it. It challenges conventional notions and offers new ways of looking at things: For instance,  what it means to be “crazy” and if the current mental health system gets it wrong more than they get it right;  if prescribed medicine (such as antidepressants that are prescribed based on a mere subjective analysis), does more harm than good;  if causes are really cures or vice versa;  if therapy messes us up ( for whatever reason), and we end up finding unexpected cures in unexpected places. There are some funny parts and there are some really sad parts. I think what most people find disturbing is that they can’t wrap their head around how someone like me ( portrayed by Becka in the story) who has a prestigious educational record and lots of academic and athletic successes, ends up losing her ability to assess reality and in a really dangerous situation with a carefree yet very dangerous man. Newsflash: It can happen to anyone. It can happen to you, and perhaps that’s why folks get uneasy.

So…I hope you read it, but prepare to be made uncomfortable. I did an interview with The Mental Health Books Podcast Show, and the hosts gave Manic Kingdom 5 trigger warnings.  If you decided to read the book, I can’t predict your reaction or how it will make you feel. I wrote it from Becka’s POV as she is going through the manic breakdown, which is why it reads like a novel, but some readers won’t be able to relate to her or her choices. Why is that? Because you, the reader, are in the right frame of mind and Becka, the main character, is not. She doesn’t know how far removed from reality she is or how warped her decision-making process has become, which is a common theme for folks experiencing mental breakdowns, but can be incredibly frustrating for the reader.

For folks who’d like to grab a copy or download one on Kindle, here’s a link to Manic Kingdom on Amazon.

If for some reason you want a personal message, you can order a signed paperback copy here.

Thank you to everyone who has left a review on Amazon, GoodReads or helped share social media posts for Manic Kingdom. Thank you to Dan from the BBC Radio Show for having me on to talk about Manic Kingdom. It’s an honor. My promotional efforts for Manic Kingdom are entirely an indy effort ( my favorite kind) , so any support means a lot to me.  I’m currently working on a new, comedic-ish novel that takes place during the Trump era, or the era of high political tension, about a girl from a small, gun-toting town, now living in New York City. So, stay tuned!  🙂

One Response to “Manic Kingdom on BBC Radio Show”