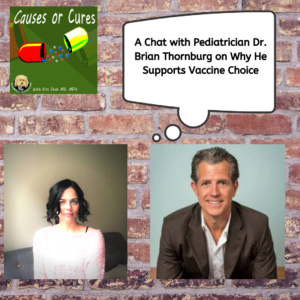 Frankly I think the word “anti-vax” is a gross reductionist term for a much broader movement.  Some folks are against all vaccines and certainly qualify as “Anti-Vaxxers” but there are many folks who question only certain vaccines, vaccine ingredients, the safety studies conducted and the current schedule of vaccines. Some folks are adamant about not giving the government the power to mandate vaccines. They find that prospect terrifying and are die-hard supporters of vaccine choice. Then there are others…

But first, let me say this loud and clear: For the record, I am not against vaccines in the slightest. Even though I don’t get a flu shot, I fully recognize the benefits of vaccines. To not do so would make me a privileged moron. Also, by interviewing folks associated with the anti-vax or vaccine choice movement , such as my previous interview with Del Bigtree, the producer of Vaxxed here, does not mean I endorse what they say. And I challenge some of their points in the podcast. The reason I am interviewing them is because the anti-vax movement is quite robust. I’ve talked to many folks involved in the movement and , let me tell ya, they are super, super motivated. And despite trendy depictions, they are smart and often quite wealthy.

That said,  the “nuances” in the movement around vaccines get lost in the mainstream coverage. In fact, they are completely left out or ignored in most of the articles I’ve read covering the “anti-vax” movement.  “Anti-Vax” has unfortunately become a throw-away-line that has reduced a much larger and nuanced movement with much broader concerns than “MMR causes autism” and involves far more folks than “Crazy moms with essential oils.” The movement includes intelligent people and professionals with legitimate concerns and questions. Some of the left-out nuances include questions around current vaccine schedules.Some parents and doctors want to space out vaccines or skip certain vaccines, for example the HPV vaccine.  Other parents and doctors are requesting more safety studies on adjuvants and cell lines used in current vaccines. And many folks are concerned about how much power we should give the government when it comes to mandating vaccines, especially when our government has an intimate relationship with drug companies and more vaccines are in the pipeline. Where is the line between prevention for the greater good and government overreach? How valuable is maintain personal choice when it comes to medical decisions?

In this episode,  I’m thrilled to chat with board-certified pediatrician Dr. Brian Thornburg about vaccines, the nuances within the vaccine movement and his approach to patients and families. He even discusses his approach to vaccinating his own 8 kids. Dr. Thornburg is founder of Thornburg Pediatrics in Naples, Florida and describes his practice as an “old fashioned approach to modern medicine.”

Read my new, provocative novel Manic Kingdom, featured on the BBC radio show and now available on Amazon. Manic Kingdom is based on a true story and will hopefully make you rethink mental illness. It’s all about embracing uncertainty.

Read my new, short parody on the Sleazy Side of Wellness: Yours in Wellness, Krystal Heeling.  You’ll laugh, promise! 😉

Up your relaxation game and grab a ZENBand from our wellness shop.