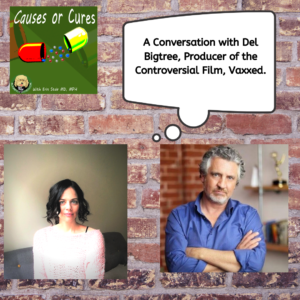 Del Bigtree, producer of Vaxxed, From Coverup to Catastrophe,  joins me on this episode of  Causes or Cures. It’s an interesting time to chat with Del. Vaxxed was just banned from Amazon,  the “anti-vax” movement is only gaining steam and outbreaks of measles are increasing around the country. What’s going on? Has Del changed his opinion at all or is he more motivated than ever? What is fueling vaccine skepticism? Who are the “anti-vaxxers” ?

Del Bigtree is a former producer for The Doctors TV Show and producer of the highly contentious documentary, Vaxxed, From Coverup to Catastrophe. Vaxxed is so controversial that Amazon pulled it just last week and theaters that dare to show it are receiving all sorts of threats. I’m even talking bomb threats. Currently Del is one of the most prominent voices in the ant-vaccine movement and produces a weekly, in-depth show called The High Wire that covers all issues related to vaccines. I’ve popped in to watch a few of those shows. They are live from Facebook, and he has a lot of active viewers from around the globe.


The anti-vaccine movement is in the news daily, and the movement is only gaining steam. While there has always been Anti-vaxxers, ( even during the Small Pox epidemic) this is one of the most motivated movements I’ve witnessed in recent times. Stakeholders don’t know how to address it and politicians don’t know what policies to pass. Most recently, politicians want to shut down social media groups that are dubbed “anti-vax”, and the World Health Organization calls “vaccine hesitancy” a top 10 global threat.  While a lot of anti-vax material is shared via social media, is shutting down their social media pages really going to stop the movement, or will it only make folks more suspicious? I think it’s the later, and I already know that people are setting up contingency plans if they are booted from sites like Facebook and Twitter.

When it’s all said and done, and having talked to many folks on both sides of the coin,  the “Anti-vax” crowd and the “Pro-vax” crowd have the same goal. It sounds weird, but they both want the healthiest kids possible. I talk with Del about that mutual goal and how it can potentially motivate an end to the “Vaccine wars.”

Causes Or Cures is available on iTunes here.

And it is available in Google Play here.

You can also visit and listen from the Causes Or Cures website.

(For the record, I am not against vaccines, but I do think the contemporary maintstream articles on this issue are missing the nuances of the vaccine movement.)

P.S.: Please consider subscribing! I have a lot of great people lined up to talk about hot health issues related to causes or cures.

Fixin’ for a crazy read? Check out Manic Kingdom here.