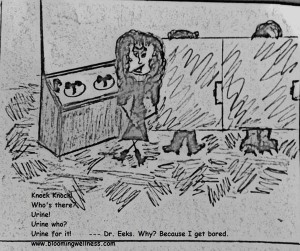 What’s the real scoop on cranberries and urinary tract infections?
If cranberries can cure urinary tract infections, they should be elevated to a God-like status. UTIs are painful buggers , so hopefully my little drawing to the left is relatable more so than offensive. If you get a UTI, “Urine for it” is right. The urgency, the stinging, the frequency…not a good time. Chronic UTIs are awful. Doctors will prescribe antibiotics, but they often lead to yeast infections and over time, drug-resistant bacteria. I know so many women who are, right now, on the UTI-Antibiotic-Yeast infection cycle. It’s a hideous cycle that can drive someone to insanity, so if we can prevent them, we should.
Before I jump into the evidence for cranberries and urinary tract infections, let’s talk basics. There are preventive measures one can take to reduce the risk of getting a UTI, such as drinking a lot of water to flush out the kidneys; not having sexual encounters with risky people; urinating after sex, and wiping the right way, meaning wiping front to back. I was recently shocked by how many people wipe the “wrong” way, or back to front. (It’s okay if you do it, no judgement, because it’s an easy thing to fix.
The focus of this blog will be cranberries and urinary tract infections. Many women drink cranberry juice when they get a UTI, because they’ve been told by their friends that’s what they are supposed to do. You’ll recognize them because they are constantly squirming while lugging around a gallon of cranberry juice wherever they goes. The question is, does it work? The answer is possibly for prevention, not so much for treatment, and it mostly depends on the dose and the timing.
Why not for treatment? Because the therapeutic benefit of cranberries is due to its Proanthocyanidins (PACs) that prevent E coli from attaching to the mucosal surface of the urinary tract and proliferating. Once the bacteria successfully attaches, it’s much easier for them to proliferate and much harder for PACs to be effective against urinary tract infections.
So what’s the evidence for cranberries preventing urinary tract infections?
Three researchers conducted a review, published in JAMA, on 24 randomized controlled trials for cranberry juice and UTI prevention. They concluded that cranberry juice did not significantly impact UTIs. That said, there was a very high noncompliance rate for women enrolled in the studies, meaning the women did not drink the cranberry juice as directed, which may have skewed results. The researchers also noted that the cranberry doses could have been too low. Other recent studies have been more promising.
A randomized, double-blind, placebo-controlled study showed that women recovering from pelvic surgery had a significant reduction in UTIs if they took 2 cranberry juice capsules 2 times a day for 6 weeks post-op (equivalent to two 8 ounce servings of cranberry juice) compared to placebo. Another study showed that women with chronic UTIs who supplemented with low or medium doses of cranberry juice for 1 year, had less visits to the doctor’s office compared to placebo. Probably the best evidence yet, is from a recent study, and the largest ever done. A multi-centered randomized, double-blind, placebo-controlled trial showed that women with a history of a recent UTI who drank 1 80z bottle of cranberry juice/day for 6 months had a significant reduction in UTI symptoms when compared to placebo.
I eat a lot of dried cranberries, so I want to mention a 2013 study by Burleigh. It was an observational study that showed that consuming 1 serving ( 42 grams) of sweetened, dried cranberries reduced the incidence of UTIs in women prone to getting them. Dried cranberries have a different antioxidant profile than cranberry juice. Dried cranberries have a much higher concentration of polyphenols. Polyphenols may prevent E coli from attaching to the bladder wall and also interfere with E coli directly in the gut, in a way that reduces infectivity. If you want to try dried cranberries, they are a great addition to oatmeal or yogurt!
From the research and information gathered here, I’d say it’s worth giving cranberry juice and/or dried cranberries a shot, especially if you are a chronic UTI sufferer. But be diligent about it and commit to following one of the successful protocols mentioned above. For example, try the 1 80z bottle a day and see if it makes a difference. It can’t hurt.
More from the blog:
Migraine-prevention Tips: Evidence-based