Part I:  Omega Three Fatty Acids and Depression. Can supplementing help at all?  First, we need to take a look at the many theories of depression.

The Theories of Depression:

Major Depression is a chronic, disabling illness that affects millions of people worldwide. The World Health Organization predicts it will become the main cause of disability by the year 2020, for both developed and developing nations. Treating depression is expensive. It is estimated that depression will cost us 13.4 billion dollars by the end of 2018. Because of depression’s high healthcare costs, because there are no objective diagnostic measures, and because its underlying biological causes remain ambiguous, it is among the ten most frequent indications for using alternative or complementary medicine (CAM), including omega 3 fatty acid supplementation.

HOW IS MAJOR DEPRESSION CLASSIFIED?

The American Psychiatric Association define major depression as a disorder in which two or more depressive episodes occur at least two months apart, in conjunction with no manic or hypomanic episodes (APA, 2000).  Symptoms that classify as a major depressive episode must be present for a two week duration, interfere with one’s prior functioning ability, and include at least five of the following symptoms: 1) Depressed mood most of the day; 2)Anhedonia;  3) weight loss or weight gain; 4)Insomnia or hypersomnia; 5) Psychomotor agitation or retardation; 6) fatigue or loss of energy; 7)feelings of worthlessness or guilt every day; 8) diminished ability to think or concentrate; and 9) Recurrent thoughts of death. 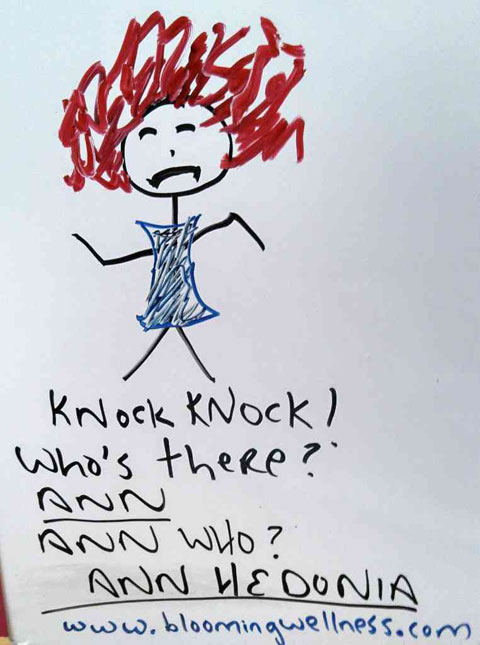 WHAT ARE OMEGA 3 FATTY ACIDS?

Essential omega-3 fatty acids are polyunsaturated fatty acids that come from a variety of plant and marine sources. They are considered “essential” because the human body does not manufacture them naturally, and they therefore must be obtained from one’s diet. Plants are sources of the omega-3 fatty acid, alpha-linolenic acid (ALA), which include flaxseeds, hemp, canola oil, fresh leafy vegetables and walnuts.  Fish is an excellent source of two preformed omega-3 fatty acids, eicosapentaenoic acid (EPA) and docosahexaenoic acid (DHA). Seafood with the highest concentrations of EPA and DHA include mackerel, salmon, herring, anchovy, sardine and trout. 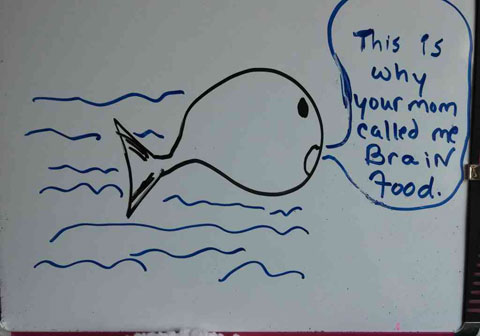 The idea that low serotonin levels in the brain leads to depression is the most popular theory thanks to the drug companies’ mega marketing machines, but it’s certainly not proven and there are many others. These include the vascular hypothesis, which theorizes that atherosclerotic changes in the brain lead to depression, as well as the theory that exposure to chronic stress reduces the size of the hippocampus and leads to depression. Research is continually supporting the emerging theory that a more generalized  neuronal dysfunction, cellular membrane and/or a dysfunctional immune response are at the root of depression, all  concepts that support the use of omega-three fatty acids for depression.

Studies have indicated that an abnormal fatty acid composition in cellular membranes may lead to depression. In 1996, a case-control study showed a lower concentration of  omega-3 fatty acids in depressed patients compared to controls, and a significant increase in the ratio of Arachidonic Acid to Eicosapentaenoic Acid (EPA). Another study showed that red blood cell membranes and phospholipids of depressed patients contained a significantly higher concentration of Arachidonic Acid compared to EPA. In another case control study, it was shown that the red blood cell membranes of depressed patients had significantly lower levels of omega-threes compared to healthy controls, and a statistically significant positive correlation between dietary intake of omega-3 fatty acids and the concentration of omega-3 fatty acids in red blood cell membranes.

Another study measured levels of docosahexaenoic acid (DHA) in the postmortem orbitofrontral cortex of patients diagnosed with major depression and compared them to controls. He found significantly lower levels of DHA in the patients who had been diagnosed with depression than in the controls, and interestingly enough, a 32% deficiency in depressed females compared to a 16% deficiency in depressed males. 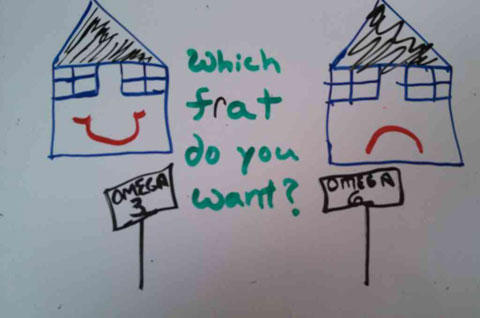 The vascular hypothesis of depression assumes that atherosclerotic changes that create suboptimal blood flow in the brain lead to depressive symptoms. This hypothesis is similar to the underlying pathology of coronary artery disease. Kris-Etherton et al. conducted a study that showed an omega-3 fatty acid deficiency in patients with coronary artery disease, while Leaf et al. ( 2003)  showed a deficiency in omega-3 fatty acids was positively correlated with incidence of fatal cardiac arrhythmias. The pathology of depression may be distinct from or perhaps worsen the pathology leading to coronary artery disease.  A case-control study comparing serum polyunsaturated fatty acid levels ( PUFAS) in 54 depressed participants and 54 depression-free controls, approximately two months after each suffered an acute coronary syndrome. They found that DHA was 14% lower and total omega-3 fatty acid levels were 12% lower in the depressed participants, and the ratio of arachidonic acid and EPA was significantly higher (12.63 +/- 6.63, p = .044) in depressed participants than controls ( 10.46 +/- 3.64, p=.044).

Also, exercise is shown to improve depression and some speculate that it is not necessarily due to the endorphin release but to the fact that exercise helps improve one’s vascular function, and therefore keeps the brain well perfused. 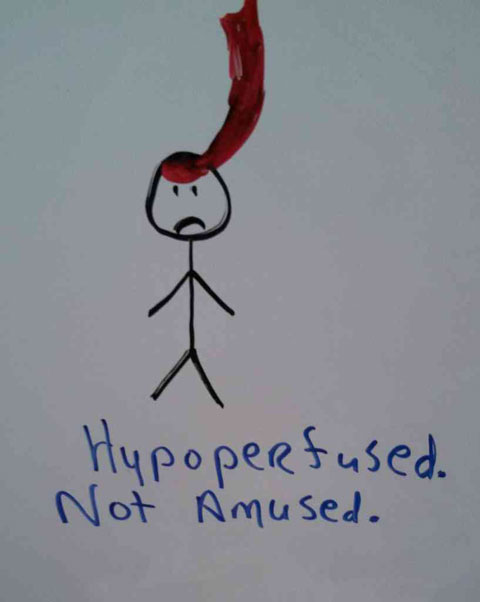 Another theory that potentially explains a link between omega-3 fatty acids and depression is that omega-3s alter the immune system which thereby leads to depressive symptoms. While the complexities of this theory are beyond the scope of this blog, prior research has shown that omega-3s inhibit pro-inflammatory cytokines by decreasing levels of arachidonic acid, the precursor to inflammatory cells such as prostaglandins, leukotrienes and cytokines. Studies have shown higher levels of the cytokines, Il-1, CD2, CD19, TNF-alpha and prostaglandin E2 in depressed subjects than in controls. Furthermore, animal studies have shown that when mice are injected with Il-1, TNF-alpha or lipopolysaccharide, which stimulates the production of cytokines, they exhibit symptoms of major depression.

Some also associate depression symptoms as “sickness” symptoms. Very simply, when you’re sick, you feel tired, withdrawn, sleepy, lethargic. You lose your appetite, want to sleep more, don’t feel like socializing and just feel, well, sick.  Since many of those symptoms are often seen in “depressed” patients and since these behavioral symptoms are triggered by specific immune cells, some say that depression could be due to a dysregulation of the immune system. 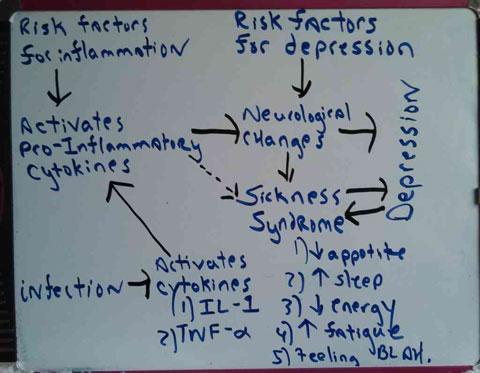 THE DYSREGULATION OF STRESS THEORY:

Depression may be caused by a dysregulation of the body’s stress response, or more specifically the hypothalamic-pituitary-adrenal axis. Several studies have shown that depressed patients have higher levels of cortisol, the body’s stress hormone, and animal studies have shown that high levels of cortisol can deactivate liver enzymes that transform the short fatty acids into the longer-chained omega-three fatty acids. Delarue et al.’s randomized controlled study showed that supplementing with 7.2 grams/day of omega-3 fish oil significantly reduced blood cortisol levels, which may be another way omega-3 fatty acids impacts depression.

The BDNF Theory of Depression:

Another theory that is currently being heavily research is the impact of omega-3s on brain-derived neurotropic factor (BDNF), which is shown to be lower in depressed patients. BDNF is shown to protect nerve cells, increase neuronal transmission, and support normal brain structure. A 2004 study conducted on rats at the University of California, Los Angeles, showed that omega-3 fatty acids can increase the production of BDNF, while a diet high in sugar and saturated fat inhibits its production.

Other emerging theories that I’ve touched on in the blog include an altered microbiome , poor sleep, and Dr. Watts discusses depression as it relates to our “social brains.” Keep in mind that a lot of these potential “causes” have a chicken/egg relationship with depression.

Phew! That was a lot.  This was Part 1 of a 2 part blog. I felt I had to post this in order for Part 2 to make sense. This blog will also help you understand why certain nutrients, diets and supplements are speculated to work for depression.

Read how changing your gut bacteria may prevent depression & anxiety

Read Dr. Stair’s provocative novel Manic Kingdom. Based on a true story and will make you think differently about sanity,craziness and mental illness.

Get a ZENBand and up your stress management game.