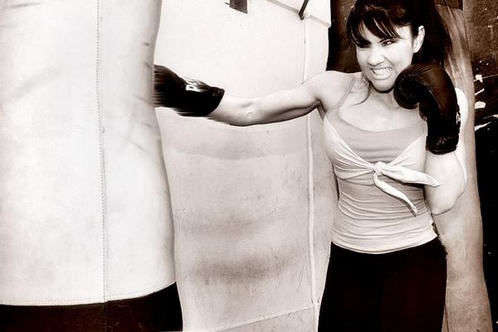 I’m thrilled to feature Mia St. John who is famous for her exceptionally successful international boxing career, most notably being a five time World Boxing champion. Mia is no longer boxing, but she’s still fighting, and in some ways, her greatest opponent. Mia has become a fearless mental health advocate and is taking on the negligence and substandard care rampant in the state-sponsored mental healthcare system, especially in her home state of California. This fight is personal for Mia. In 2014, she lost her son Julian in a state-sponsored rehab facility due to gross negligence. Julian St. John , who is also the son of Emmy award winning actor Kristoff St. John, was a talented contemporary artist whose artwork, even copies of his originals, were selling for 3500 $ a piece. He also suffered from diagnosed schizophrenia and addiction. In 2014, he was in a rehab facility in Compton, California to get professional help for his addiction. That’s where he died.

Mia: My son was diagnosed with schizophrenia and was on and off his medication. He became addicted to methamphetamines, so he would run away a lot to get drugs, because I obviously didn’t allow them in the house. He would end up homeless and in psychosis. I would have to search the city of LA to find him. Eventually I had to put him in a facility to get him off the meth.
How old was he?
Mia: When he passed, he was a week shy of his 25th birthday.
What happened in the facility?
Mia: Well, the California Department of Healthcare Services found the facility guilty of neglect and falsifying records. The facility was marking my son as “okay” even hours after he had been taken to the Coroner’s. Surveillance shows that they were not watching him, and yet they were falsifying his records. They do this frequently. It’s not anything new. It’s just that it’s covered up by the LA County Department of Mental Health, La County Board of Supervisors, and the California Department of Healthcare Services. There are many deaths. It’s not just my son. It’s an entire cover-up by LA county, and if you do research, you’ll know that LA County Department of Mental Health is the largest mental health department in the entire United States, yet it has corruption written all over it.
How did he pass?
Mia: He took his own life with a plastic bag. In his room. His roommate was in the room, so we are not sure what happened because my son told us a few times that his roommate was going to kill him…, but we don’t know if he was in psychosis. We know he walked in his room, the roommate followed him, the roommate came out of the room, and my son was found dead.
When did the facility know of his passing?
Mia: They missed 3 or 4 checks before they finally went in and checked on him.
And they falsified those records?
Mia: Well we have the records. You can see that they were marking off that he was fine, even hours after he had died.
What about medication? Was he taking his medication?
Mia: He would have never committed suicide if he was on his meds. Toxicology showed that he was not taking his meds, his antipsychotic. They kept writing in his file that he was taking it, but he wasn’t. I watched it on surveillance. They are supposed to look under your tongue, but I saw them give him a cup, he takes it, and walks away. He probably just went back to his room and threw it in the garbage. They didn’t watch him swallow it. He called me right before and told me he was hearing voices. I was trying to talk him out of it. He trusted me. He would ask me if it was real, and I would say, “No Julian, it’s not.” I thought I talked him out of it. We had plans. He was going to come home for Thanksgiving. He had an exhibition at his art gallery in December.

Wow. How often do you think this type of negligence happens?

How did the facility know it was a suicide if they weren’t even watching?
Mia: At first, they did bring in homicide to investigate and took fingerprints, but they couldn’t bring the roommate in for questioning, because it’s a mental health facility. It’s in Long Beach Compton, which nobody gives a shit about. If you die in Compton, good luck to you. If you’re a black man who dies in Compton, good luck to you. I promise you if the report had said white male in Beverly Hills, there would have been an uproar. But a black man in Compton? No one cares. They didn’t investigate any further. So, no, we will never really know. I know my son was suicidal. I was the last one to talk to him.

Was this his first rehab facility?
Mia: My son had been in and out of rehab for many years. He would always call me and say, “Mom I want to come home!” I would say “Okay, honey,” and go get him. This was the one time I said No. I told him that he needed to get sober or he will die in the streets. But as it turns out, it wasn’t the drugs. It was the facility that killed my son. I was always pulling him out of facilities. I pulled him out of this facility, because I didn’t like them to begin with. But when I pulled him out, everyone said that I was enabling him…that he was going to go back to using. And I agreed, I did overprotect my child. Every time he used and came crawling back, I would always take him in. And I would always go looking in the streets for him when he didn’t come home. And everyone said, you gotta leave him on the street or put him in rehab. So I ended up putting him back, and my intuition was right.

Is this facility still up and running?
Mia: Yes.

What do you hope sharing Julian’s story accomplishes? What is your goal or goals?
Mia: Well, we’ve already changed policy. We’ve changed the plastic bag rule. There shouldn’t have been a plastic bag there anyway. They promised me they were contraband, but that was not the case. There was a plastic bag in my son’s room. So all of the county facilities here have banned plastic bags, and we had a supervisor from the LA County Coroner investigate the facility. The problem is that there are so many deaths, yet the California Department of Healthcare Services continues to license these facilities. The LA County Department of Mental Health continues to contract with these facilities and fund them through taxpayers’ money and not hold these facilities responsible. I want these facilities held accountable. I want the facilities that have numerous deaths and violations to be shut down. I want to make an example of them so that the others will listen and will be aware that they will be shut down if they don’t follow the regulations of our state.

Are the deaths you mentioned mostly suicides?
Mia: Not all of them. Some people are killed and some are suicides. It’s all lack of proper care. They aren’t watching them. They aren’t monitoring them. It’s a huge business in the state of California.

Do you have a website or an organization folks can visit if they want to help you with your mission?
Mia: Yes, there is my son’s website. I have programs in Santa Monica and programs in Mexico. They can find everything on my website, the Mia St John Foundation. I’ve been doing this for years, but I started the mental health programs for the homeless after my son passed.
Very cool. What do the programs include?
Mia: Boxing, yoga, meditation, art…
I love the holistic approach.
Mia: There has to be both. You can’t medicate someone and expect everything to be fine. Medication is vital, but there has to be programs along with it. And nutrition…, I know that’s very difficult, but we put a lot of work into it.
Do you see an improvement?
Mia: Oh yeah. We are increasing their cognitive and motor skills. Even just by working out. Your brain releases endorphins, so they feel better. They are more interactive, when they were once only reclusive.
Do you teach the boxing?
Mia: Some classes. I have employees that I have trained. I teach in Santa Monica and I teach in Palm Springs too, once a week.

Is there anything else you want to add or anything I missed?
Mia: We have a documentary coming out. We don’t know when yet, but it will expose the system. I’m sure all the LA officials consider me a thorn in their ass and that’s good, because I don’t intend to stop until I get the shutdown of these facilities to make an example.

I admire your passion and strength. Most people would give up or think it’s too big of a fight.
Mia: I sound stronger than I am. I contemplate suicide every day, and it’s not like I don’t anymore, but I need to complete my mission. And I do an awful lot to save myself. I go to Sedona. I go anywhere and everywhere. I’ll go any place that I think can help me. I’ll travel the world. I don’t care. I have to stay here and be strong for my son and for others. I have a daughter, and I want to stick around and be her mother. I don’t just think of my son, but all the others who are still there. I have an obligation to the world to do something. I want to uncover the fraud and expose these centers. Look at all the reports that are in the LA Times and national news about all of the facilities in southern California…and no one seems to be care. Yet they are being exposed, nationally. Why people don’t care? I assume because it’s not your child. But when it is, you’ll care.