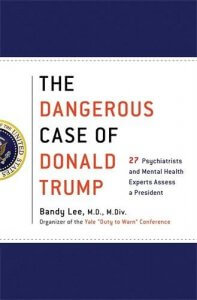 The Dangerous Case of Donald Trump, written by a group of psychiatrists and psychologists, isn’t about Donald Trump. It’s about how a group of medical professionals think it is perfectly acceptable to publish statements about someone’s mental health without personal consultations, lab values, imaging or anything remotely objective. That is narcissism, and one Trump could easily file under “Pot and Kettle.” The only thing the book accomplished was further delegitimizing a medical discipline already suffering from rampant claims of being a pseudoscience.

The authors say no ethical violations were made, because they didn’t make a professional diagnosis, thereby complying with the Goldwater Rule. The Goldwater Rule was established by the American Psychiatric Association in the aftermath of the 1964 presidential election between Lyndon Johnson and Barry Goldwater. Opponents of Goldwater feared he would start a nuclear war. Fact Magazine polled over 12,000 psychiatrists on the mental fitness of Goldwater and published the results of the poll, with the majority of psychiatrists saying Goldwater was mentally unfit, and described him as “delusional,” “grossly psychotic,” and “paranoid.” Goldwater lost the election but sued Fact Magazine and won. The Goldwater Rule came soon after. It states that it is “unethical for psychiatrists to give professional opinions about public figures they have not examined in person, and from whom they have not obtained consent to discuss their mental health in public statements.” If you read The Dangerous Case of Donald Trump, a lot of opinions by a “professional” were given. Trump was referred to as a bully, a pathological narcissist, a hedonist, immature, incompetent, delusional, grandiose, and sociopathic- basically all things ex-boyfriends have called me at some point in time. I am not the expert on what classifies as a professional diagnosis versus a professional opinion, but I will say this: Congratulations, authors, on mastering what I like to call the “Call-a-girl-fat-without-calling-her-fat” technique.

I may be hypersensitive to the idea of long distance professional diagnosis, or long distance professional musings (whatever), because I’ve been a victim of short distance whimsical diagnosing. There was a time in my life when I was feeling low, hopping around from psychiatrist to psychiatrist, and in the process received 7 different diagnoses. If you call yourself a “science,” I still don’t know what that means, sans highlighting a field of ambiguity. What I know with certainty is that psychologists and psychiatrists, medical professionals who make 99% of their diagnoses by talking to and observing a person one-on-one, should refrain from commenting on anyone’s mental health until that happens. Everyone, no matter what, deserves the dignity of a thorough and thoughtful evaluation. Anything else is the snake oil of professional opinions.

“But his tweets!” I hear that a lot, and certainly some of the President’s tweets have caused me to pause and furrow.  The latest “My bomb button is bigger than yours” tweet comes to mind. I thought for sure we’d be nuked. I live in the always targeted New York City so I bought some beans, bottled water and scoped out a spot in our basement. Then, just a few days ago North Korea shockingly announced that they want to talk peace with South Korea, so what do I know? Tweets are not the person. One’s public and social media presence is not the person. There is a lot of showmanship. It’s hard to know what’s real, serious or an attempt at levity, sarcasm or creativity. Tweet readers will inject emotions into tweets, but whether that is the emotion the Tweeter meant to convey is often a mystery. I’ve experienced this personally. I can’t tell you how many times I’ve been deleted for an intended comedic status update that was misinterpreted or offended someone.

The Dangerous Case of Donald Trump is also a perfect example of Maslow’s hammer. In his book Psychology of Science, Maslow wrote, “I suppose it is tempting, if the only tool you have is a hammer, to treat everything as if it were a nail.” In other words, of course psychiatrists and psychologists will analyze Trump through a mental illness lens. Other doctors of different disciplines would analyze him through their respective lenses. A cardiologist might look at his tweets and worry about transient ischemia. A sleep specialist might wonder about insomnia, heavily linked in the literature to mental instability and violent proclivities. An infectious disease doctor might wonder about Lyme disease which is linked to a myriad of mental symptoms. Fortunately, this fall the American Medical Association updated their code of ethics to say that it was unethical for a doctor to publicly diagnose someone he/she hasn’t examined.

Besides further delegitimizing the way mental illness is currently diagnosed, The Dangerous Case of Donald Trump helps perpetuate the stigma against those with mental illness, proving that even mental health professionals can fuel that stubborn mark of odium. The book implies that someone deemed professionally “mentally unfit” can’t and shouldn’t serve in a leadership role. It implies that speculative violence is the same as being violent. It implies that “crazy” people should be sidelined or kept to lower jobs of lower distinction. History says otherwise. One study showed that out of 37 US presidents, 49% were afflicted with mental illness. Winston Churchill is famously known for coping with his “black dog,” a playful nickname for his cyclothymic depressive disorder. Some historians say it was Churchill’s “madness” that made him so great.