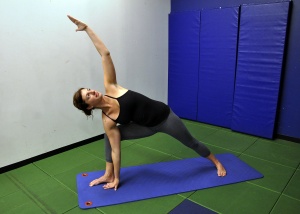 I NEED to run. It keeps me in good shape, yes, but it’s also my natural antidepressant. I get so irritable when I don’t run, and the people who are closest to me, know this. If I get snappy with them, they usually say, “Erin, you didn’t run yet, did you? Why don’t you go for a run!” That’s why I was a monster to be around when my right knee started to hurt three months ago and sidelined me from running.

I developed this sharp and nagging pain on the inside of my right knee. The pain didn’t just affect my run, it even affected my walk, to the point where I was limping around Gramercy Park and having trouble walking Barnaby, my energetic golden doodle. I tried the CVS ice packs, knee braces, anti-inflammatories, new stretches, lots of swimming…,but the pain just wouldn’t go away. I thought, “Great. I’m officially getting old and all those years of beating up my legs on the soccer field are finally catching up.”

Then I heard the magic question, “Oh no, Erin, why are you limping?” The question came from Diana Zotos, a board certified physical therapist. She was in the middle of a session with a friend I was visiting, but my limp caught her eye. I said I had no idea, but it was going on for a while and driving me crazy. She offered to work with me, and although I was cynical, I figured I had nothing to lose and took her up on her offer.

The first thing I noticed was that Diana’s approach was very different than a lot of physical therapists I have worked with in the past. Her approach was smart, holistic and very detailed. She initially examined and assessed my knee in a way that was familiar to me as both a doctor and a patient, but the exercises she had me do felt more yoga-like than anything. She also gave me a ton of verbal cues telling me what each muscle, from my neck muscles down to my toes, should be doing and how each body part should be positioned. Her verbal cues were crucial for me to maneuver my body safely and correctly. Since I’m hyper-flexible and often flop around like jello, she sometimes would have to manually position my body in the desired posture. But her constant verbal cuing is what really helped me remember how to do the exercises when I was by myself.

Fast forward a month out from when I started working with Diana, and now I have no pain in my knee when I walk, I’m no longer limping, and I have much, much less pain when I run. In fact, the only time I experience a twinge of pain is when I’m running, my irrational competitive side kicks in, and I try to beat the marathoner-types around the Central Park loop. Even more important is that my mood is better and I’m not a terror to be around ( At least I don’t think I am. 😉 )

I’m a doctor with a passion for natural healing and prevention, so I become obsessed when I find something that really works. I asked Diana about her therapeutic approach. She explained to me that through her experience with rehabilitating patients, she developed an innovative and unique approach to healing called physiyoga. Through years of practice and patient feedback, she has refined her therapeutic technique to offer what she, and her patients feel, is a smarter approach to healing. Physiyoga is a holistic approach to healing that combines yoga with traditional physical therapy. Aha, so I was doing yoga after all! Diana combines everything a normal PT would do with yoga postures, mindfulness and breathing techniques. She really hones in on the mind-body connection and bridges eastern philosophy with western traditionalism to offer a complete approach to injury prevention and rehabilitation. To me, that’s just super cool and efficient. Diana, herself, has been a physical therapist for 8 years and practicing yoga for 15. Her yoga skills were evident when I asked her tips on how to keep from falling on my face while in Crow pose and she lightheartedly mentioned that she did Crow a lot while pregnant. That’s impressive. If I tried to do Crow while pregnant, I would accidentally murder my baby.

Diana also mentioned that she and a London-based physical therapist are offering an Advanced Yoga Teacher training for yoga instructors interested in conducting classes that are more strongly rooted in physiology, anatomy and biomechanics. This course, which will be offered to enthusiastic yoga teachers in New York City this Fall, is called PhysioYoga Global and will allow yoga instructors to become certified in physiyoga. Now, I am not a yoga instructor, but I am a passionate yoga student and go to yoga class three-four times a week. I have many different instructors and some are amazing, even though the certification process for teaching yoga is rather ambiguous and sketchy. That said, I know I speak for a lot of yoga students when I say that I really wish more yoga instructors had a greater understanding of basic physiology, anatomy and biomechanics. There are many times when I’m in yoga class and wondering if a particular pose is going to break my arm or my neck or something a normal human being should be doing. Sometimes I feel like my head is going to fall off or I accidentally signed up for the yoga class with Circus freaks. I myself experienced a neck injury from attempting a yoga pose I never should have, and I have spoken to many neurologists who treated patients that suffered neurological damage from a poorly conducted yoga pose. I would be much more confident if I knew my yoga instructor had training in basic physiology and anatomy, which is why I plan on pimping Diana’s course to every yoga instructor I know.

If you are a yoga teacher or want to tell your yoga teacher about Diana’s class coming up in NYC, here is the link to find out more: PhysioYoga Global.       The course ( My yoga teacher is now signed up for!! 🙂 )  is this fall, right here in NYC  at Kula Yoga Project and will cover the following material: