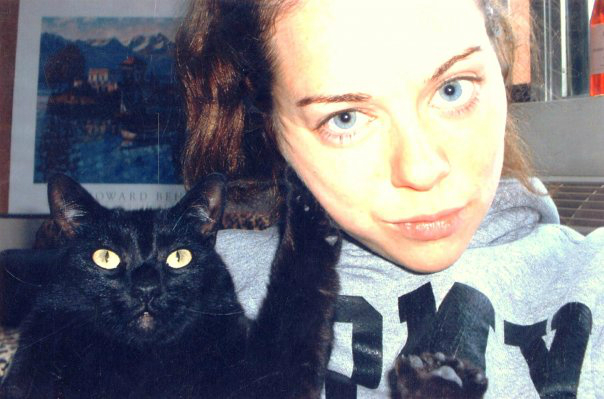 One of my pet therapist, my delightful, mysterious, refreshingly affectionate yet often aloof black cat, AWOL, has gone to The Rainbow Bridge.
I’m too choked up to write a proper tribute…, but I will write something, because she deserves it. I remember being a first year med. student, going through emails and nearly deleting an email from a 4th year female med student. Instead, I opened it and read about a cat she found wandering on the streets of Philadelphia that was now locked in her bathroom, because the cat simply refused to get along with her other cats. Would someone PLEASE adopt her?

I thought to myself… What the Hell? Med school is depressing and lonely, might as well get a companion. Drove to the girl’s apartment later that afternoon, opened the bathroom door, and saw the cutest, toughest black cat holding court in the bathroom– she let out the wildest hiss, but not at me…, it was aimed at a now spooked orange cat that tried to sneak a peek at her through my legs. It was clear that humans were welcome in her world but other cats were not. She ended up coming home with me that day…, and after I used my Irish to convince my human roommate why we REALLY needed this cat, the story of Awol began. At least for me. Was never sure how old she was or how long she was a stray.

I will miss her dearly, no kidding. From her sass, to her games, to her very vocal and prominent MEOWS, to her spooky silhouette in the window, to her unerring devotion…, the kind only a pet can show. And, of course, a very special thank you to my Mom and Dad, who took such great care of her when I couldn’t and who kept her very comfortable in her final days. You couldn’t ask for better care.
Love you always,  AWOL. You keep ’em guessin’