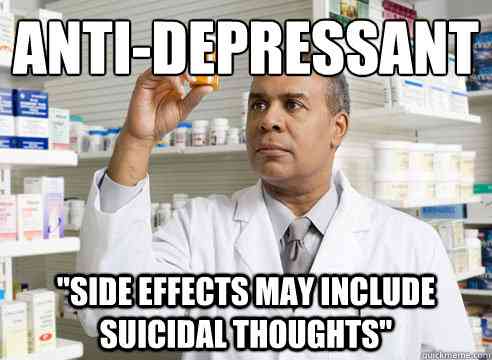 A colleague mentioned  that antidepressant prescriptions for kids were increasing. I didn’t believe him.  I figured the prescriptions decreased after 2004 when the FDA issued a boxed warning stating that antidepressants increase the risk of suicide in kids.  I was wrong. Antidepressant prescriptions decreased for about 4 years after the boxed warning, but then started to increase in the 2008-2009 period, including scripts for multiple antidepressants. In fact, they increased by a whopping 400%.  Just recently a study in Pediatrics found that the suicide risk seems higher for kids on multiple antidepressants. Yes, multiples. Because if you’re trying to make a really depressed kid happy, don’t give just one pill that comes with a suicidal warning, give two or three. But FIRST do no… harmonica?????

Along with more antidepressants for kids, there’s also more ADHD and anxiety medication being prescribed.  A recent CDC study showed that about 3.5 million kids are on meds. for ADHD. It’s as if childhood is suddenly being attacked by an army of mental diseases.  That’s sad since being a kid used to be the fun part of life.It’s strange to consider that today’s kids are unhappier, more anxious and pay attention less than children of past generations. Evolution is a slow process so childhood wouldn’t evolve into a mental disease that fast.  Plus, today’s kids have more toys, more food, more fun stuff to do, more opportunities and less infectious diseases around to kill them. They even have i-pads and i-phones in contrast to all the”i-don’t” generations of kids that came before them.

Given the spike in kid mental illness one logically assumes that the diagnostic techniques for detecting mental diseases have drastically improved. But, no.  Kids, like all other people on earth who are told they have a psychiatric illness, are still diagnosed by subjective analysis and, dare I say, someone’s opinion.  Presumably it’s an expert opinion. But it’s still an opinion, and an opinion often formed in a minutes long office visit, and many opinions are flawed. As it stands, there are no objective tests for psychiatric illnesses, so improved diagnostics can’t explain why childhood has suddenly gone crazy.

Lately, many teachers are discovering all the kids flying over the cuckoo’s nest.  Often times they point out a fidgety, tearful, nervous kid and tell his parents that it might be time to “get the kid checked out and consider meds.” That happened to my friend’s kid.  My friend was upset, called me and was considering medicating her child. Personally I think it’s weird for a kid NOT to have any ADHD symptoms because kids are supposed to be hyper and have short attention spans because they’re, um, kids. So I told her to calm down and consider the possibility that the teacher was boring and that kids are supposed to have short attention spans for boring teachers.  In a world where kids are less and less allowed to be kids, I had to say it. As it turned out her kid was just being a kid and after a brief phase of kid excitability and kid weirdness, he went on to be a successful, happy, medication-free student.

For the record, I’m not picking on teachers. There are amazing teachers out there who help kids blossom into their very best. But today a teacher’s opinion can and often does serve as an impetus for a parent taking his/her child to a psychiatrist, and some teachers prefer obedient kid-robots to the normal 150000 shades of kid. Heck, if psych meds were trending in kids when I was in Kindergarten, my teacher would have had me in a straitjacket and lobotomized by first grade.

I’m no expert on crazy. But to me the craziest thing of all is to think our still-developing kids have become mental patients, need to be labeled with a heavy, subjective psychiatric diagnosis and medicated with powerful mind-zonking brain medications that have lifelong side effects, when there’s a high chance the benefit is all placebo anyhow.  THAT’S batshit.

What happened to transient weird, funny, anxious and awkward kid phases or even troublesome kid rough patches? Can we please bring those back, leave them to Dr. Time, and ensure that we aren’t calling them a mental illness and medicating them away?  Can we please let more kids develop naturally and treat them holistically without having their baby brains hijacked by pills? Or at least check to see if the mental symptoms are due to bad sleep, bad food or a bad environment.

If an army of mental diseases is truly attacking kids’ brains, Big Pharma will fight back with the big guns. But the big guns, as in all wars, have a lot of collateral damage. So before using the big guns on a kid called crazy, first give Dr. Nature, Dr. Time and Dr. Common Sense a whirl.

* If you agree that kids are over-medicated and natural remedies should be exhausted first before resorting to powerful medication, please share this post and help the cause!