I haven’t added updates from Barnaby’s life in a while. Shame on me.  He’s already 6 months old! I can’t believe it. Within the last 2 months, he put on 10 pounds, started school, celebrated 2 Holidays, a birthday, got his very own red winter jacket, flew on a jet to the Virgin Islands and Florida, visited my family in Pennsylvania, discovered the joys of Genius Kong, and randomly reunited with his brother on the streets of NYC.  He also was the official mascot of the “Fat Camp” i went to in Florida, which I will discuss in a subsequent blog.  Barnaby and I also work out together- on the trampoline especially, which gets a little crowded but has really improved my balancing skills. Let me tell ya, if you play King of the Mountain on a trampoline with a very bouncy puppy, you’ll lose. Now he uses the trampoline solo to spring himself up onto my bed. It’s hilarious.

The only seriously negative thing to report is that he seems stuck in this eat-your-own-poop stage.  I don’t know if Freud studied dogs at all, but I wish I knew why Barnaby eats his turds. It’s beyond gross, and then I try to spray this natural dog mouth-spray in his mouth after he eats his doodoo, but he hates it and makes me run around the apartment and chase him till I sneak in a spray or two.  But.., instead of blabbing on and on about Barnaby, I decided to post pictures. Because pictures are always better.

1) Barnaby looks more and more like a muppet every day. Here’s us playing “What-it-would-look-like-if-muppets-and-aliens-too-over-the-world.  In case there are any questions, I’m the alien. 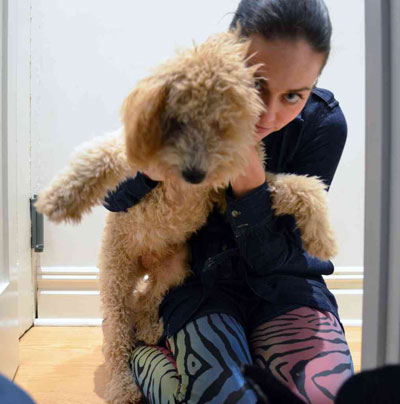 2) For his first Halloween, Barnaby had 2 unofficial costumes. This is because he hated both of them, and ultimately the one that wasn’t eaten would be his official Halloween costume. One was a Job Interview. ( That would be the one of him in the tie. He had a resume that said, “Born.”)  The other was a witch with green hair ( Because that’s what PetSmart was selling) 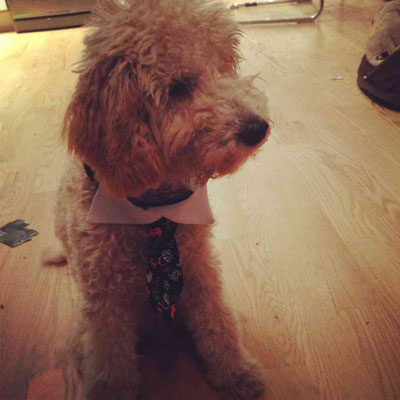 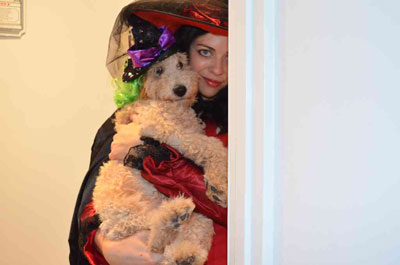 3) Barnaby started school at The School of Dogs. He’s learning lots of cool tricks. Although, I have to mention that he never does any homework so I have a feeling he is planning on keeping a good class standing on charm alone.  I’ve gone to a few classes with him. He’s a bit distracted and a prankster, so I’m thinking he might end up being the “Class Clown” instead of the Class Valedictorian. Still, he now knows how to “Leave it,” shake, stay, sit, and give a high five. I’m hoping the next set of classes focus on getting him to not eat valuable things, not eat shoes,  not eat wrappers, puke and poisonous berries on his walks, not eat his doodoo, not bite my hands so hard when we are playing, and not sprint out of the bathtub all wet every time I attempt to give him a bath. If he can get those skills down, I’ll consider sending him to college.  Here’s a picture of him with his school uniform on: 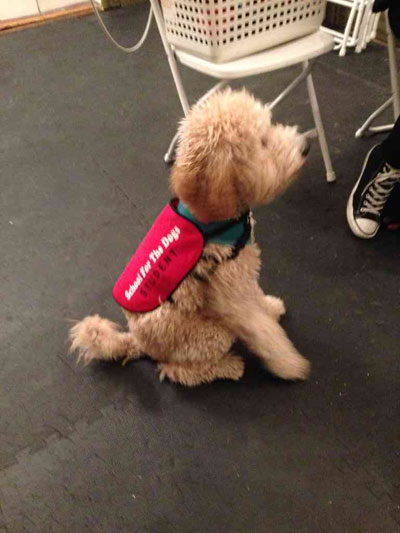 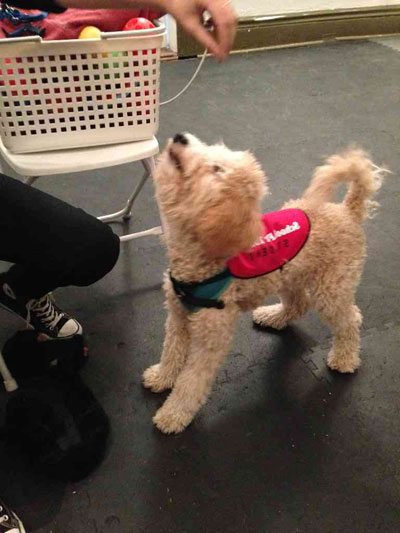 4) Barnaby has started jogging with me. I used to run dogs for a company, Running Paws, on the Upper East Side of NY while I was studying for my medical boards. That experience taught me how fun it is to run with a canine companion. It’s especially great because you don’t feel pressure to carry on a stupid out-of-breath conversation with them while you’re running. You just run and have fun.  And they are also always available if you want a running buddy. Humans aren’t. 😉

Here is a picture after our first successful jog together. 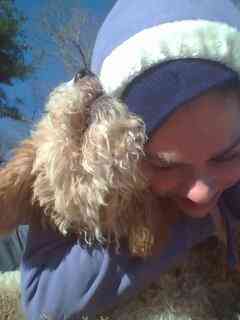 5) This next one is such a cool story: I was walking Barnaby down 2nd avenue and towards home when this girl stops me. She was on her cell phone, but immediately hung up her call and said, “Oh wow! Your dog looks so much like my Oakley.”  I smiled knowingly, since golden doodles are such a popular NYC dog and I hear that  lot.  Then she asked me how old Barnaby was. I said 6 months. She said, “So is mine.”  Coincidence, no biggie. Then she asked where I got him from. I mentioned the location which is in upstate New York. She gasps and says, “So did we!” Hmmm. Then she asked, “Were his parents’ names Justin and Jacenda?”  Holy…why, YES! YES! They were.  As it turns out Barnaby and Oakley were litter mates. In human language that means brothers.  Stunned and buzzing with the energy only crazy coincidences can create, I kept asking her questions and where she lived. She lived only 2 blocks from me. How weird is that??!!   We immediately decided that we had to do a reunion.  Neither of us would even consider letting this one go. The brothers must meet, we must get a picture for Facebook, and we must schedule future puppy play-dates for future Facebook photos.    Even though it was a blistering chilly night, we decided that we couldn’t wait and the brothers needed to meet that very night. So I met her on the corner of 2nd and 18th Street. And then it happened. The brothers, after 4 months of separation, met again. Truth be told, I have no idea how the reunion went. They immediately started wrestling each other on the street corner while myself and Oakley’s owner danced around and spent the next ten minutes avoiding strangling our limbs with rapidly oscillating leashes. The brothers wrestled HARD, too, so I’m assuming maybe some of their sibling rivalry came out.  We plan to have future play-dates, especially after both boys get neutered, but seriously? Can you say Small World? 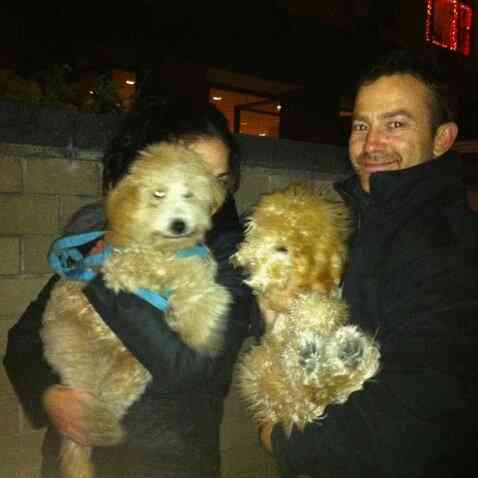 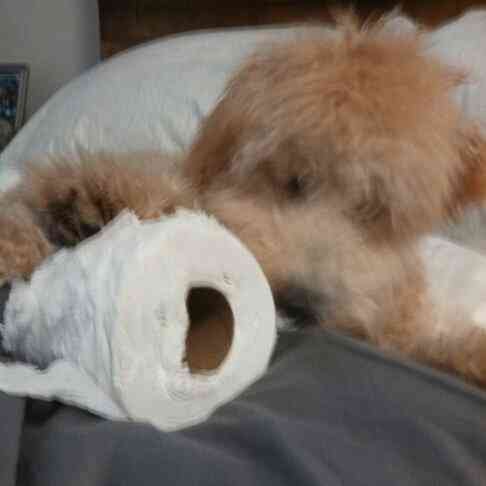 7) Barnaby flew on a plane.  He’s also quite amazing in the air. While I’m flipping out due to my flight anxiety and expecting the plane to nosedive at any minute, Barnaby snores the entire plane ride.  I need to have some of what he has.  He also is my pet therapist on flights, because whenever I start to sweat and breathe heavy and ask for red wine, IV style, Barnaby starts licking my hand to calm me down. I’m telling ya, people, get a dog! 🙂 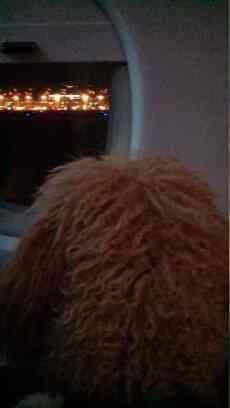 8) Barnaby went to work.  I think he’s an investment banker, because isn’t that every guy in Manhattan?  He also obviously loves money because he ate a pile of dollars from my wallet.

9) Barnaby Celebrated his first Thanksgiving Dinner. He is thankful for shoes, toys, treats….repeat. Here he is joyfully horse-playing with my nieces, Maggie and Katie. 🙂 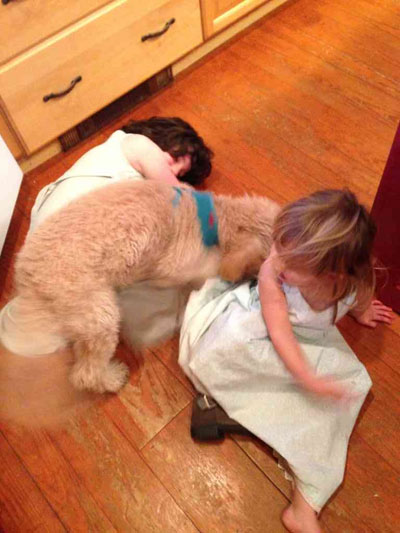 10)Barnaby celebrated his first Christmas! Santa brought him 2 bags of treats ( holistic, of course and rawhide-free) and 2 toys. I struggled to get his picture in front of the tree, but after 20 or so treats, we finally managed to do just that. Him wearing a Santa hat didn’t go over so well, but there’s always next Christmas. 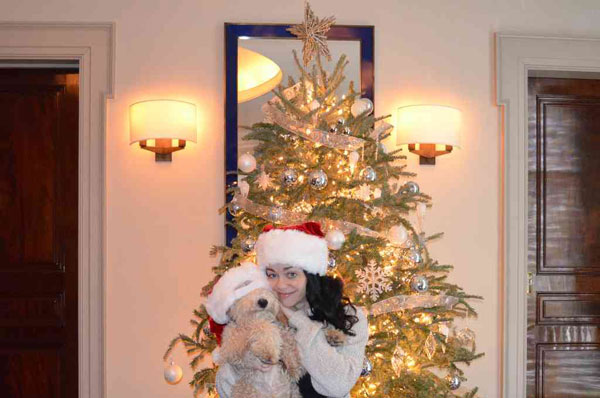 That said, Merry Christmas and Happy New Year to everyone. Keep following Blooming Wellness for more Barnaby updates in 2014…including his first real job at Fat Camp in Florida as a pet therapist.

One Response to “Updates from Barnaby’s World: The Blooming Wellness Pet Mascot’s/Pet Therapist’s Life in a Blog :)”