I’m a huge fan of coughing and letting it all out unashamedly. Hack, spew, gurgle, gargle, let’s make some noise up in here!  Seriously.  We cough because something is irritating us in our respiratory tracts ,and our bodies are trying to get rid of the irritant(s). For the record, I’m not talking about a smoker’s cough. If you smoke and have a really terrible cough, you’re better off quitting smoking so you don’t cough as much. I’m also not talking about a cough that may be caused by heart failure, lung cancer or another major disease.  I’m talking about a temporary cough that accompanies allergies, viral or bacterial infections.

I’m not a fan of suppressing a temporary cough, because that’s like telling our body, “Hey, you! Don’t you dare try to get rid of that irritant! I don’t feel like making a noise so I’m just gonna let that irritant and others stay down there!” I much prefer coughing the irritant(s) out and/or up and/or whichever direction you cough.  In that sense, coughing is your teammate. Obviously you should cover your mouth when you cough so you don’t spread germs, but covering a cough is far different than suppressing a cough.

The good news is you can suppress your cough all naturally.  The golden answer?  HONEY!  Several studies have shown that honey is as good as some of  the medicinal-type cough suppressants, such as dextromethorphan.  2 tsps of honey at nighttime can help reduce a nagging cough and allow you to get a good night’s sleep. It’s all natural with no side effects. Can you say WIN-WIN!?!?!

There is also all this chatter about a productive cough vs a nonproductive cough. A productive cough traditionally refers to coughs that produce mucus of different consistencies and colors. (What a beautiful thought, right? I hope you ate well before reading this blog)   A nonproductive cough is just a cough that doesn’t give you anything. A stingy cough of sorts that just doesn’t give it up so easily.   Someone recently asked me if there was anything he/she could do to make his/her cough more productive.  Honestly, time usually takes care of that. When your cough is ready to be productive, it will be. But to aid it a long, I suggest hot liquids, hot steam baths and hot water with lemon.  Or you can try OTC cough syrup with Guaifefesin in it. That will help “break up the mucus,” so to speak. That reminds me… Yesterday I was riding the good ol’ subway and at least 10 people in my cart were coughing and spitting gross stuff up. The collage of sounds almost had a melody to it, that I was nearly compelled to write a musical called, “The Sound of Mucus.”   ( The trains are alive….with the sound of mucus….lalalaalalalalaa…..)   Clearly, stuff is going around….

I’ll end with my definition of a productive cough.  If a cough was truly productive, it would look something like this: 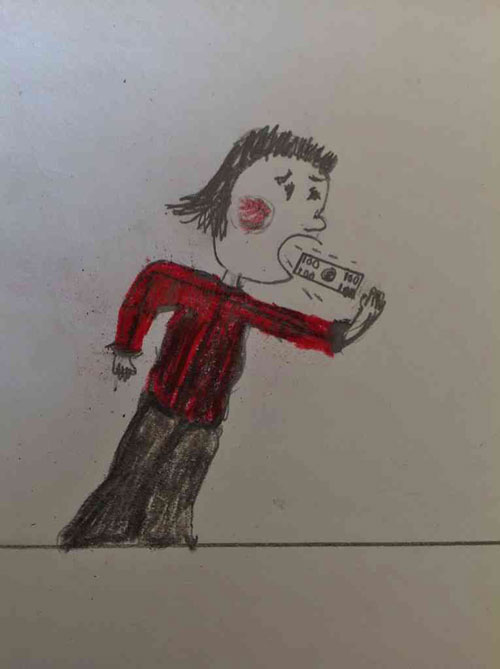 Yes, I wasted 10 minutes of my life drawing that picture for you all.  So appreciate it.