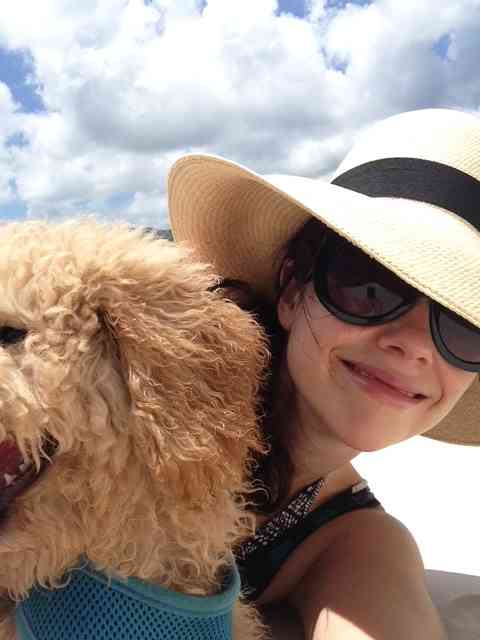 So Barnaby, my Goldendoodle pup, is a little over 4 months now.  He just finished getting all of his puppy shots at our last family outing.  My dad, a veterinarian, is great for that.  My sister Sue had a Halloween bash last weekend, and I brought Barnaby to it and my dad brought Barnaby’s shots.  Barnaby is now up-to-date and I’m saved a big NYC vet bill. SCORE!  My dad is great for this sort of thing. Family gatherings usually involve one of the Stair pets receiving veterinary treatment of some kind.  For instance, at my nephew Winston’s birthday party this year, my dad neutered a few stray cats on my sister’s ironing board.  I opted to put the kitty balls in the kids’ gift bags, but was outvoted.   ( Next year… 🙂 )

Since Barnaby received all of his shots, he was able to get groomed. I took him to a grooming salon in Union Square, where I was interrogated by a really cautious and motivated groomer. She explained that grooming can be traumatic to pups and that he should only get the bath. Then she pet him and found a few mats and said that he should get the full grooming shebang.  She then asked me what option I wanted.  “The Pumpkin Spice Spa day…, The Eco-Friendly Groom Package, the Fall Leaves Package, the Super Pup package….etc.”   I was a bit overwhelmed with all of the options.
“My puppy does not need a spa day. He needs a trim. That’s it.”

Apparently dog grooming has succumbed to anthropomorphism too.  To get on with it, I checked off a box and was told Barnaby would be done in 4 to 5 hours.  4 to 5 hours? Apparently I bought him a spa day after all.

I then went about my business and did all of those chores I can’t do with Barnaby around- such as sweeping, making my bed, organizing my shoes, folding laundry, etc.- and then went to pick him up when the groomer called and said he was done.  When I arrived at the groomer’s, she knowingly waved and went to get Barnaby. When she brought him to me, I had to keep myself from falling through the floor. He looked so much scrawnier than when I dropped him off, and what fur was left of him was puffed out and styled in a manner that made him look like a hair-sprayed, fashionable, manicured poodle. Barnaby looked like a  high rolling snob!   YUh-uckk. 🙁

“Your bill comes to 120$, Ma’am,” the groomer piped and stirred me from my horror.

Still I paid and paraded my “poodled”  Barnaby home. The entire way, I couldn’t help but think onlookers took me for his dog walker instead of his owner.  It’s because I was wearing what I always wear:  jogging pants, an over-sized, ripped sweatshirt and sneakers.  I could pass for the owner of a scraggly mutt but not for Barnaby and his new doo. And having been a NYC dog walker, I can say this. As kept walking, i did some silent self cognitive therapy: I reminded myself that the haircut wasn’t the end of the world, that it will grow and that there are starving kids in Africa.

Anyhow, I eventually googled “goldendoodles and grooming” and found this great line on a breeder’s website: “Be careful when you get your goldendoodle groomed and specify exactly what you want. Sometimes they come out looking like poodles and horrify their owners!”   It’s always great to find information on the web that perfectly explains your life experiences.

In other dog updates, Barnaby will be going to dog school. Eventually I would like him to be a therapy dog, but to do so he has to pass an official test involving sitting, shaking, leaving a treat alone when it is offered to him, staying, not being distracted by other dogs, etc.”   If he took the test now, he’d score about a 15% on it, so perhaps dog school will help him get a few points. I’m not sure if he’ll ever be able to leave a treat alone if offered, but, eh, we’ll try. For cryin’ out loud, I struggle with that. The good news is that he has a wonderful temperament and loves everyone, so that will work for him in terms of becoming a therapy dog.  Even if he can only be an “unofficial” therapy dog. ( wink, wink).

Luckily I met a fellow dog owner on the street who told me her puppy went to a dog school near to where I live, and that it was really great.  I asked her the name of the school and she said it was called, “Dog School.”  Great. That’s a name I can remember.

She also told me that they offer more advanced dog classes if the owner so chooses.   “Like what?”  I asked.

“Well, my dog is learning to use the ipad,” she said.

“Wait, I’m sorry. I thought I just heard you say that your dog is learning to use the Ipad?”

“Yes! It’s to keep him preoccupied and challenged while I’m not at home,” she said with no sarcasm at all.

Oh, right. To keep the dog “challenged.” Why didn’t I think of that? !!!  Perhaps the school offers dogs courses in rocket science too. Maybe Barnaby can go to college after all!  Maybe he can be president one day…

‘That’s really….great!”  I said.  “Hope he doesn’t learn how to use your credit card to make online orders for bones and toys.”

“Oh no,”  she answered while demonstrating no obvious signs that she had the ability to detect sarcasm, “They just teach the dogs how to turn the ipads on and off and stuff.”

“Well I’m sure that skill will come in handy for ‘im,”  I answered.  You know, like, never.

So Barnaby will have to be satisfied with  being preoccupied with kongs and occasional squirrel sightings, because I’m not paying someone to teach him how to walk on an ipad.   But I will keep you all posted on how he does in dog school.

And here is a short video of  pre-haircut Barnaby acting as a sidewalk dog therapist.  Who says “therapy” has to be “official” anyhow. 😉