Here are some pictures from my life in the last week, analyzed through a Totally Healthy or NonHealthy lens.

( This is something I’ll do from here on out. Why? Because I want to. I encourage you to take snapshots of your everyday life and analyze them through a “health” lens. You might learn something about yourself and your health status!  People who engage in qualitative research do picture-taking all of the time. A picture of your daily life could encourage you to change something about your life that will make it better. Pictures tend to paint things and give us messages in a very obvious way.  😉

I also decided to take snapshots of my daily life adventures and post some on my blog, so that when I’m old and dying and reading my archived blog in a rocking chair ( which will probably be able to fly by then), I want to remember what I did in my heyday.  Unless the flying rocking chair is so cool that I won’t care about memories. Plus, blogging is my therapy, and “writing therapy” is totally healthy, soooo….just roll with it. )

*Read with a sense of humor too. I’m not that serious.

1)Catching up with good friends to finally see The Book of Mormon. Totally Healthy.  The Book of Mormon is a Comedy, and comedy is also totally healthy for you and should be sought after at all times.  People who laugh more live longer. Or they die laughing. Whatever, both sound good to me.

The Book of Mormon is a parody on Joseph Smith and the Mormon religion. I’m not one to comment on a group of people who follow a guy who says he found the secrets of the universe on golden plates, buried under a tree in his backyard,  nor am I fit to comment on a guy who talks to angels and, thereafter, gets a bunch of followers, BUT, every Mormon I have ever met is super-duper happy. And being super-duper happy is totally healthy. 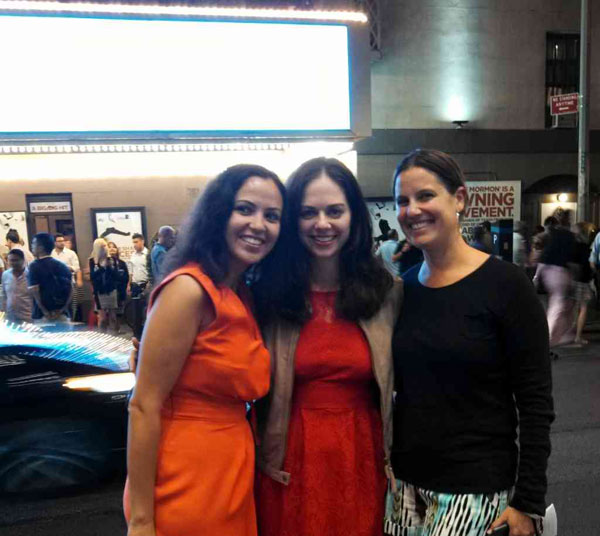 2) Barnaby found my wallet and ate my money. That is Totally Unhealthy.  Well, paper is fiber, so for him it might be Totally Healthy ( in a weird way). But not having money is totally unhealthy. All the studies show that people who have a higher socioeconomic status are healthier than those with lower socioeconomic statuses. It has something to do with feeling like you are more in control of your own life, which is a totally healthy sentiment. Having money helps with that feeling. That said,  I did save a torn-up dollar from Barnaby’s wallet binge, because it reminds me that  even though money is important in life, it isn’t the most important thing. For example, being able to train your dog to steal money from other people’s wallets, and not your own, is obviously more important. 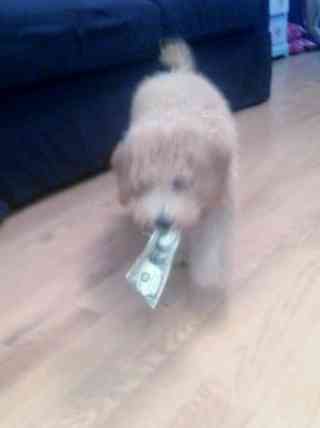 3) Taking care of stray kittens while I was visiting Pennsylvania equals Totally Healthy.  I caught these two kittens sleeping on my grandmother’s porch before they woke up. They are from different litters, but decided to be bunk buddies here.  I think taking care of stray cats/kittens is  form of volunteer work, and research shows that people who volunteer are happier and healthier people. Traditional psychiatrists are even prescribing “volunteer work” under the larger category of “Positive Activity Interventions,” because they are shown to pull people out of depression.  That’s pretty neat.   Helping is Totally Healthy. 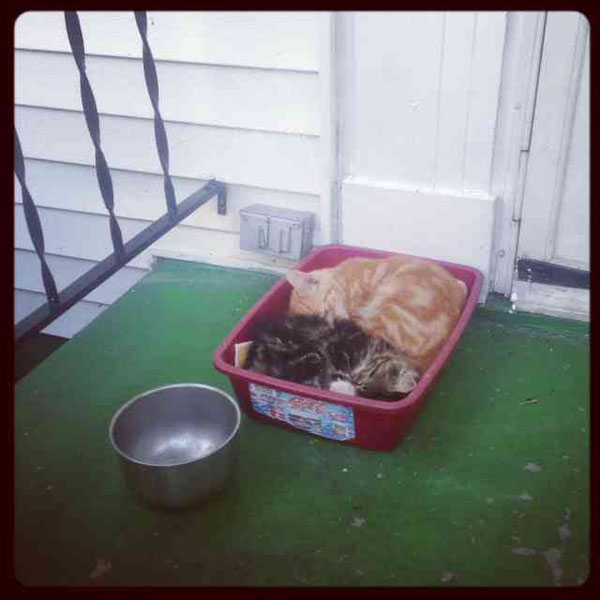 4) Hanging out with my oldest best friend, Audrey, equals Totally Healthy. Even though we were totally troublemakers when we were youngins’. 😉  Long-term friendships and supportive social networks are two ingredients for living healthier lives. That is, of course, as long as your friends are healthy. Research shows that our friends’ activities heavily influence our own. For example, if your friend gains a lot of weight, it is 50% more likely that you will. That said, go out there and befriend a fit marathon runner. 😉

This was my first time trying out Ethiopian Food. I had the vegetarian dish with their traditional bread, Injera. The food was really really light, healthy and spicy which equals Totally Healthy.  We also ate with our hands, which I like, because I hate forks and spoons. On another note, and I realize I am afflicted with a small-town mentality, but I thought there wasn’t  food in Ethiopia. Seriously, all I saw on TV growing up was infomercials about starving kids in Ethiopia!  So to discover that Ethiopia has food was a relief. Or at least Ethiopian restaurants have food. Maybe the food that is in Ethiopia gets shipped to Ethiopian restaurants. I don’t know, it’s confusing. 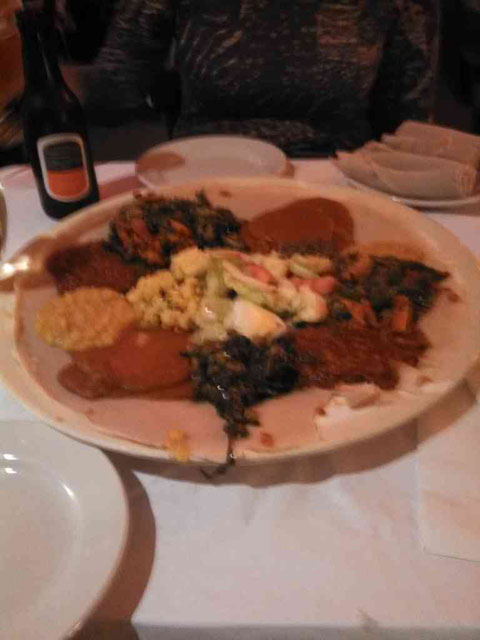 Utilizing one’s right to assemble and protest in a democratic way equals Totally Healthy.  Not saying what we believe in and instead choosing to hold it all in out of fear is totally unhealthy! There was even a recent study showing that the act of cursing and expressions of anger were healthy, because they were cathartic for people. People that wanted to angrily curse but instead held it in, had higher blood pressure readings, heart rates and stress levels.  A protest is definitely a form of catharsis and that’s a good thing.   This particular protest occurred over the weekend in Union Square, NYC.  It is in reference to President Obama’s talk about air strikes against Syria. Personally, I’m against the war too. War is totally unhealthy, and should always be a last resort and certainly should not be waged in highly ambiguous situations, as the one in Syria.   War is totally unhealthy- it only leads to death, destruction, more ill will, instability and a ton of PTSD.

If we do go to war, this will be the first time in history that a Nobel Peace Prize winner drops a bomb.  But we all know the rest of them ( Mother Theresa, Ghandi, etc…) were just pussies. 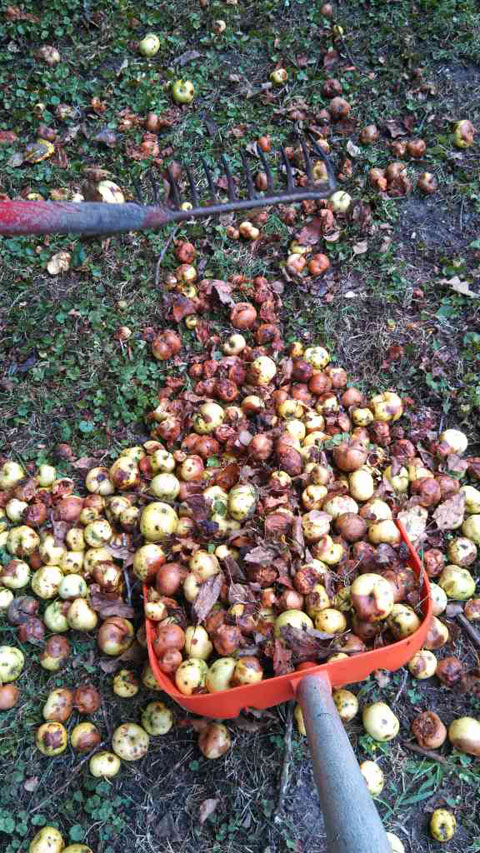 When I visited my parents they assigned me the chore of cleaning the yard of crab apples. I first tried to see if there was anything healthy about crab apples. There isn’t, really.  😉  They are a bitch to clean up, especially when they are rotten and fermenting, because they are hot to pick up.  That said, raking them into piles and picking them up with a shovel to load them  into garbage cans, which I then had to carry to the front of the yard to where the garbageman picks up the trash IS totally healthy. Seriously, it was a great arm workout. And if your mom is yelling at you while you pick up the crab apples, well that’s great as well, because it is totally healthy to have an opportunity to work on building your patience.  Seriously, this activity reminds me to be happy to do house chores of any kind, because they always involve burning calories, and therefore every chore should be its own little workout!  If your chores are not a workout, you need to turn them into one.  Get creative, people.  If you’re a rich person who hires someone else to do all your chores, then you’re missing out.  😉

Running is totally healthy and being able to squeeze it into a busy schedule is also totally healthy.  It was cool to see the red, white and blue color combination against a midnight-blue sky.  Especially on 9/11, a day no one will ever forget.  Peace. 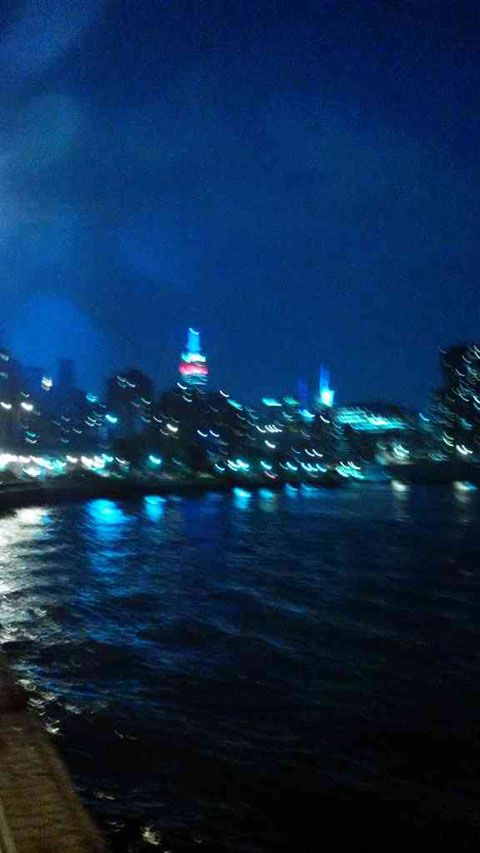